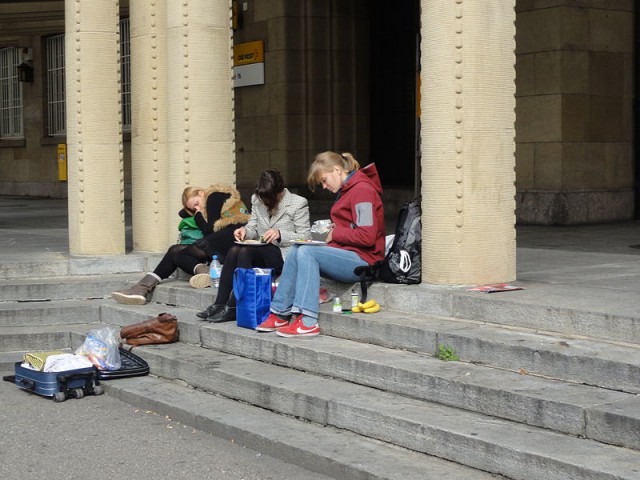 Years ago, I was eating at McDonald’s in a Florence, Italy, train station when I spotted three tall men in American football jerseys. I was glad to see some compatriots, so I went over and struck up a conversation. It turned out that the Americans were playing for a league that was trying to spread the sport in Europe, apparently without much success. We chatted for a while, and one of them mentioned that his contract was almost up.

I knew exactly what he meant.

I’d also experienced the feeling that in this new country, nothing made sense, no rules were obeyed, and the basic logic of the universe didn’t apply. But then I’d started speaking the language, understanding the logic, and moving into a space where the Italian world felt more real to me than the American one I’d left behind.

I recalled the football player’s remark recently, when I heard about some new research. It seems that living abroad is not simply a matter of relocation. It’s a matter of mindset. And what you get out of it depends more on what goes on in your head than on your dates of arrival and departure.

Those of us who have lived abroad know how expatriates fall into archetypes. There’s the complainer, the one who sees all that’s wrong with the new place, and all that is right with the old one, and who constantly tries to recruit newcomers to his or her point of view. There’s the gone-native, who sports local attire, marries a local, will only speak the local language (even with fellow expats) and, after returning home, gets in trouble with the health department for butchering a chicken in his apartment. Then there are the rest of us, who end up somewhere in between. For a long time, I thought these categories were arbitrary, with the main difference being how well a person mastered the local language. But I now know that researchers have developed a more sophisticated understanding of how people deal with life abroad.

Every person has an individual response to the opportunities and stresses of living in a new country. In the academic realm, this is called an “acculturation strategy,” and the one you choose depends on many things: your personality, your circumstances, and whether you are an immigrant, a refugee, or a “sojourner,” someone who plans to stay for a limited time.

The football player and I were both sojourners, but we found different paths through the maze of Italian culture. His seemed to be what’s called “separation,” or the rejection of the new culture in favor of the one at home. Meanwhile, I had moved toward “assimilation,” or the rejection of one’s home culture in favor of the new one.

Eventually, I would swing back toward something closer to “biculturalism,” in which you learn the new ways of thinking, speaking, and interacting but retain your old ones. It means having two separate identities in my case, an Italian one and an American one.

I’m not blaming the football player, or taking credit myself. I was lucky, because I was living with an Italian family, going to an Italian school, and making lots of Italian friends. I was learning to see the world through their eyes. The football player, on the other hand, was living with Americans, playing an American game, and speaking English all the time. It’s hard to get immersed in a new culture when you’re living in a bubble.

Immersion is difficult (though perhaps no harder than the separation strategy), but it’s worth the effort. A team led by Carmit Tador, of Tel Aviv University; Adam Galinsky, a researcher at the Kellogg School of Management at Northwestern University; and William Maddux, of the international business school INSEAD, recently concluded a decade of research that sheds some light on this.

They had already found that living abroad tends to make people more creative. But their latest work shows that biculturalism (versus the other strategies) also makes people more professionally successful, more entrepreneurial, and more innovative at work. Biculturalism, in other words, is good for business. Why? According to Galinsky, it has to do with “integrative complexity,” something of a holy grail in psychology. It means being able to see things from multiple points of view, make connections between them, and integrate them into something new.

That ability to consider and combine perspectives is linked to both creativity and success. In a separate study of the letters of U.S. Civil War generals, which analyzed the writing for density of ideas and perspectives, higher levels of integrative complexity correlated with battlefield success: Robert E. Lee was more complex than most of the generals he beat, but less complex than the general who beat him, Ulysses S. Grant.

As it turns out, living abroad, and learning to see how things appear through the lens of a different culture, is one way to develop this kind of thinking. “Basically,” Galinsky told me, “what we showed is that the act of adapting and integrating your experiences with your host culture leads to these long-term transformations in terms of the complexity of thoughts. And that allows people to be more creative, more entrepreneurial, and have better reputations and higher promotion rates.”

This research suggests the importance of exchange programs and of exposure to other cultures. It shows the value of learning languages that give you access to other ways of thinking. It demonstrates the worth of employees who’ve lived abroad. But it also shows that simply living abroad is not enough.

Complex thinking “is really about two things,” Galinsky says. “One is trying to look for differences looking to see when things are different from your home culture. And second, looking to see why those differences exist. It’s not just thinking about the host culture, it’s thinking about the host culture in relation to the home culture. It’s that comparison process.”

When you reach a point where you’re straddling two ways of thinking, that’s where you begin to see things that others might miss. It is there between two equally real worlds that the doors of possibility open.

Maybe that football player was having a bad day. I hope he got to know the real Italy. Maybe it seemed more real to him once he got home. If he learned to see the world through new eyes, there’s no telling what paths have opened up before him.

Frank Bures is a contributing editor at World Hum, where his stories have won several awards.