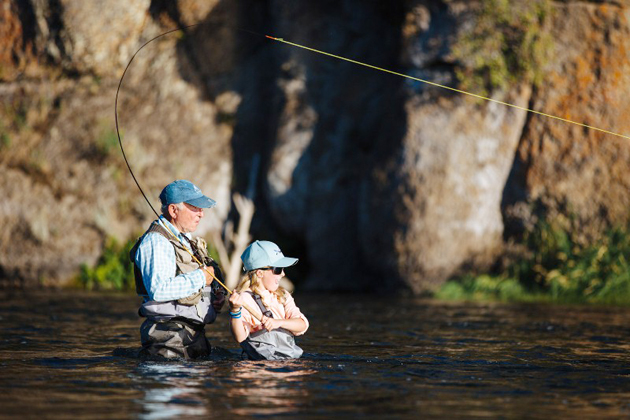 It’s a rarity when the newest trend on the scene is actually more traditional than the status quo. Such is the case with the emergence of tenkara, a Japanese minimalist flyfishing technique that dates back hundreds of years, and came about well before the fly-fishing rod and reel method that’s so universal in the states today.

Usually the talk of the town in fly fishing is something progressive, like the next big deal in reel technology, but surprisingly the tenkara method boasts a more simplistic approach, where only a rod, a line and fly, are used. Tenkara purists take the minimalistic concept one step further by using just the traditional dry reverse hackle fly instead of constantly picking a different fly from the diverse allotment carried by most traditional fly fishers, with the notion that they can make that one fly work for multiple situations without troubling themselves with changing out the fly. The line used in tenkara, which is attached to the tip of a longer rod averaging around 12 feet, is usually the length of the rod, or not much longer. The lack of reel, absence of excess amounts of line and one-fly-fits-all concept makes tenkara seem less intimidating than the precedent, which many in the industry believe will get more people interested in fly fishing.

The founder of Tenkara USA, Daniel Galhardo, was the first to bring this simplistic style and approach of fly fishing to the United States in 2009. Galhardo says that since he started the business it has doubled in size each year and has been taking off in Boulder because of an active tenkara fly-fishing community that’s spreading the word. Galhardo says he believes that the acceptance of tenkara has a lot to do with the time in which we live, where the push for creating and surrounding ourselves with more and more advanced technology has made our lives more complicated, which in turn is causing people to crave simplicity. Galhardo says that like any new style or trend, acceptance wasn’t immediate by the fly-fishing industry though.

“When I started introducing it around here, the more traditional part of the industry was like, ‘That’s not fly fishing,’ so it was pretty tough for awhile,” says Galhardo. “I had to remind them that this was actually a traditional form of fly fishing, and that this is actually how fishing starting.”

With Patagonia introducing their own tenkara startup kit, which includes the book Simple Fly Fishing: Techniques for Tenkara and Rod & Reel, rod, line, leader and a dozen of soft hackle flies, tenkara has come one step further on the road of acceptance. The founder of Patagonia and one of the authors of the book provided as part of the kit, Yvon Chouinard, has been spreading the word of tenkara and teaching it to employees on retreats for years now, and finally made tenkara products available for Patagonia customers this spring. Dave Allen, Patagonia fly fishing ambassador and presenter, said it was important for Patagonia to start producing tenkara products because they wanted to make fly fishing more accessible to people.

“It goes along with what this company has always been about, getting more people out into the environment so they can create a real personal relationship with the outdoors,” says Allen. “And let’s face it, the more people interested in preserving the environment, especially here in Colorado because our rivers are so threatened, the more likely they will be preserved for years to come.”

The tenkara rods being produced by Tenkara USA, Temple Fork Outfitters, the supplier for Patagonia, and Zen Fly Fishing Gear, who supplies Front Range Anglers, all boast the convenience of telescoping rods, which collapse down to a size no greater than 23 inches and weigh no more than 6 ounces, a factor that may appeal to backpackers. The less-is-more approach helps keep the startup cost down, with the full Patagonia kit costing $279.58, which Allen says is one of the prevailing reasons why people who don’t even fly fish will be more likely to give it a try. The lack of gear also allows for tenkara to be easier to set up than regular fly fishing, which gets a person fishing quicker, and hopefully a fish on the line sooner. But the lack of excess line makes some wonder how they’re going to bring in a fish once they hook it.

“One of the great things about tenkara, in my opinion, is that you have to keep up with the fish,” says April Vokey, Patagonia fly fishing ambassador and guide. “If your fish is on the run you have to run with it because you don’t have the line to let it go. I believe by removing the reel from the equation you make the connection between the fish and you that much closer.”

Vokey says that the removal of the reel and excess line make for a less intimidating approach to fly fishing, but noted that more skill was necessary in some cases, such as in the presentation of the fly. According to Vokey, the excess line available in regular fly fishing with a reel allows people to just throw the fly in the current and let it do the work. Tenkara fishing forces the participant to pay more attention to what’s happening under the water in order to make certain the fly reaches specific areas of the creek. Adam Omernick, founder of Zen Fly Fishing Gear, found this more difficult part of tenkara to actually be a draw to the method.

“I found myself focusing more on the water, the fish and my presentation,” says Omernick. “Even though my fly selection got smaller, my catch rate increased. It became less about the fly and more about what I was doing with it.”

No matter how many people are taken with the tenkara method, when something new emerges there are people who will pick a side in the debate of which technique is best: tenkara or the traditional rod and reel? There are also anglers not opting for one over the other, but finding enjoyment and a use for both. Chouinard says he uses tenkara 50 percent of the time, and opts for the addition of a reel when going after bigger fish.

Front Range Angler employee, Wallace Westfeld said that tenkara is most applicable for smaller streams and that he believed you couldn’t do as much with a tenkara setup as a conventional rod and reel. He also agreed with Chouinard that it was hard to make tenkara work for larger fish because they would likely break the line or even snap the pole.

Front Range Angler employees said they started carrying tenkara rods because of customer demand, but once they got the Zen Fly Fishing Gear products, they didn’t sell a tenkara setup for several months. Lately though, employees say they’ve seen a rise in sales as tenkara has become more commonplace in the field. Westfeld says he understands the attraction of tenkara because of its simplicity, but prefers the adaptability that rod and reel fly fishing allows.

“Anyone who works in this shop does a multitude of types of fly fishing. There is a certain inflexibility to tenkara and I think that’s why no one in this store has really gravitated towards it,” says Westfeld. “I could be fishing different locations with completely different stream setups during a given week or even day, so I prefer the versatility over the simplicity tenkara offers.”

Paul Prentise, a Front Range Angler employee, says that even though none of the staff has really taken to tenkara, they welcome tenkara into the industry because they support anything that promotes more people getting into fly fishing.

Even though people in the industry have different opinions of tenkara, getting more people to enjoy the act of fly fishing is a universal thread that holds them together. An instance where tenkara’s attributes got a person involved who had never fly-fished before is when Alan Arnal’s 3-year-old son asked to learn fly fishing. After seeing an email from Patagonia promoting a tenkara fly fishing presentation in Boulder, Arnal made a point to go to the event. He noted that tenkara was cheaper and used less equipment, making it easier to get into.