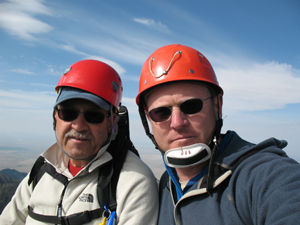 “That was the worst experience of my life,” my father declared just after we had returned to camp from climbingthe Red Gully route on Crestone Peak.

I laughed at his exaggerated assessment of the climb, knowing that in his 66 years of life he certainly has had a worse experience. But I understood his sentiment. That was quite a workout for this aging, deteriorating father/son climbing team. And we had one more to climb the next day. Crestone Needle would be my last fourteener.

As I stood on that summit the following afternoon, Aug. 13, 2009, I was surprised at the lack of emotion, celebration, ceremony or enlightenment. It was just another climb, after all. Well done. The sense of completion, of finality, of satisfaction was as thin as the air.

Let’s just get down this thing.

In the weeks since that summit, however, I have become satisfied with the awareness that I have a story for every Colorado fourteener. I can answer with some authority about all of them, if anybody is asking. Which of them is the hardest? This is the most common question I’ve heard. Most climbers usually include Capitol Peak, Little Bear, the Crestones or North Maroon near the top of that list. I have to cast my vote for the Mt. Wilson/El Diente combo.

That was a long, hard day. But few climbers can agree about that particular superlative. One climber’s epic was a stroll for someone else.

And what’s the easiest? I’d have to say Mt. Bierstadt, which I’ve seen chubby children running up and down.

Others say it’s Quandary, a mountain so crowded with people that my father once considered running for mayor of its summit.

But reflections about the toughest or easiest climb lack the richness of other measures in my mind. What other qualities of experience are worth exploring and sharing? For example, on which mountain did I laugh the hardest or take the longest nap or endure the most grueling bout of diarrhea or get the worst sunburn or the most heinous blisters? I have answers for all of these questions, too the type of questions that make every mountain climb superlative in some way.

Snowmass Mountain, June 2003, for example, holds two points of distinction along those lines: worst campsite and worst post-holing. After setting up our tent in an obvious site complete with fire rings and logs for benches, I decided to grab some rocks to secure the tent’s lines. There were plenty of rocks nearby from which to choose. So I, of course, grabbed one that was covering a mound of human excrement and wiping paper. After much cursing and hand cleaning, I looked around at the other rocks, shoved them aside with my boot

and realized that our entire campsite was very recently a communal toilet.

The next day, dad, brother and I set off around Snowmass Lake, worried because we had failed to bring snowshoes. Other hikers on their way out had some pretty rough stories about the deep, soft snow that awaited us. I figured that these were the same guys who befouled our camp, so I gave them little credit. Sadly, they were telling the harsh truth. At first, the post-holes were kneedeep, which made the hiking much more of an effort. But on a few occasions, we broke through the top layer and sank down to our chests in the snow. Getting back out of that was exhausting and very frustrating. It’s fun to watch someone else, such as my brother, struggling to extract himself from chest-deep snow. But my turn would come quickly, and my laughter was inevitably interrupted by a sudden plunge. And this went on for a long time. Once we had finished our hellish slog around the lake, the climb was over for some of our team due to complete exhaustion. Thanks, Snowmass, for the memories of foulness and failure.

Even the relatively obscure San Luis Peak is distinguished when I recall that it was there that my father, siblings and I dressed in the oddest fashion ever to be seen in the Colorado mountains of 1982. Before we discovered GoreTex or fancy synthetic, moisture-wicking, fast-drying, lightweight space-technology clothing, we made due with blue jeans and sweatshirts. We carried plastic ponchos, just in case. But on San Luis Peak, we achieved the cutting edge. We wore blue wool surplus Air Force ROTC marching slacks. We each wore a pair of my mother’s pantyhose underneath and then used plastic bread sacks for socks. The pantyhose actually felt real nice, I admit, but none of it made any sense to me. My father offered an enthusiastic defense for every odd article he had us wear that day, but I have since forgotten and retain only the vague sense of shame and humiliation.

My worst example of navigating among Colorado’s highest occurred during my first attempt at Bierstadt. It was to be a solo climb, early May 1998. I didn’t carry a route description. I just knew that you climb east from the top of Guanella Pass. So I climbed east and uphill for a few hours, surprised that Bierstadt was tougher than I’d heard. But when I summitted and noticed the observatory just below me, I realized that I was atop Mt. Evans. Oops. So where’s Bierstadt? I dropped down to a saddle and crossed to the next high summit. But the register there said this was Mt. Spalding. A gust of wind blew my gloves from the summit, so with spare socks on my hands, I descended as quickly as possible back to the pass and the car. I looked back up at the peaks to the east: How could I have missed Bierstadt? It’s right there in front of you. Worst route-finding ever. (That is until my hapless dad and brother climbed Quandary when they thought they were on Fletcher.)

Where was your best glissade? East face of Pikes Peak in June of ’95. What’s the biggest rockslide you’ve ever seen? The one I set loose from near Capitol Peak’s knife edge on Aug. 7, 2005. Worst weather? Three days of non-stop rain and lightning in Chicago Basin in August 2007.

With the fourteeners done, what’s next?

Well, there are plenty of non-fourteeners to climb. And it’s my turn to do for my kids as my dad did for me repeating climbs I’ve done to get my kids up these mountains.

I’ve noticed that world history is often rendered in brief as dates of battles, beginnings and endings of wars, and so forth.

Climbing mountains links our life histories to dates of summits and the superlative experiences that lead us back up there.