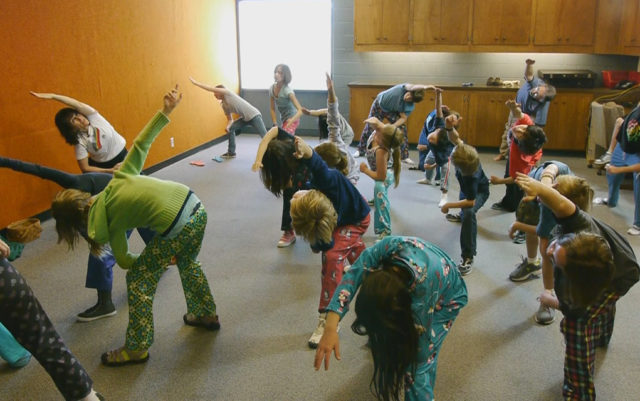 As the founder of CALMING KIDS (CK): Creating a NonViolent World, Dee Marie has been teaching yoga in Boulder Valley schools for more than a decade. Centered around the Sanskrit word ahimsa, which she translates as “non-violence towards self and others,” her curriculum is part of a national effort to combat violence in schools. October is designated Stop America’s Violence Everywhere (SAVE) month by American Medical Association (AMA) Alliance. Started in 1995, AMA Alliance members have implemented more than 700 SAVE projects around the country.

As the SAVE representative for the state of Colorado, Dee Marie, a long-time member of the AMA Alliance, started CALMING KIDS in 2004 in response to a growing concern with the increasing number of school shootings taking place around the country.

“We did four years of study to prove that if we teach in the schools, we can decrease violence and help children with relaxation and self-regulation,” she says.

First Dee Marie trained teachers in the curriculum, but it quickly expanded to teaching the school staff how to practice the same principles of relaxation and self-regulation, as well as conducting classes for the kids with the goal “to try to create the new paradigm in the schools which is (she inhales and exhales slowly) that we can relax,” Dee Marie says. “The schools just need relaxation. Everybody needs the ability to focus, relax, come into their center to help them in all aspects of their life. With children, it’s to help them with test taking and their anxiety as well as their communication with each other on the playground. And with the teachers, it’s to help them with the bureaucracy and to keep going day after day in an environment that is very demanding.”

A large part of the SAVE campaign is combating bullying in schools. According to DoSomething.org, approximately 3.2 million students are victims of bullying each year and 17 percent report being bullied two to three times a month or more. Bullying can lead to kids skipping school and even dropping out. Moreover, 71 percent of students report that bullying is a problem in their schools and 67 percent say their school doesn’t handle bullying effectively.

With CALMING KIDS, Dee Marie hopes to change these statistics by equipping kids with personal and relational skills through the practice of mindfulness.

“It’s deep program in a child-like and fun way,” she says. “We’re going after some deep concepts here — how we breathe and how we think affects how we act and how we feel.”

In addition to the physical aspects of yoga, the CALMING KIDS curriculum includes practical role play so the kids can practice dialoguing what they would do in certain situations. The program allows the kids to think about potential situations and how to react to them.

Other questions she asks the kids are: “How can I have a compassionate heart? How can I find calmness even though you’re being mean to me? How can I stand up to you and know it’s not about me, it’s about you? Where are you coming from? Where is the other person coming from? Is it good for the community is, it good for you? What are the repercussions going to be?”

These are big questions for all of us, especially kids. But that doesn’t deter Dee Marie from asking them anyway. And, as her research shows, it’s working.

“What we found was that not only did we help the kids that were targeted, the bullied, rise, but the bullies relaxed and started to understand what they were doing,” she says. “… We empower the targeted, we relax and bring some consciousness to the bullies and then we get the bystanders to show up. Bystanders have to chime in and talk, not just sit back and watch or laugh.”

Dee Marie knows from personal experience just how rehabilitative and freeing these principles can be. In the early ’80s she was a professional dancer in New York City, performing mostly modern jazz and theatrical dances. But one snowy night, the cab she was getting into was hit by a truck.

“I was told I would never walk again and I definitely never would dance again,” she says. “[But] I rehabilitated myself through many techniques and the best of them all was yoga therapy.”

Fully recovered from the accident, Dee Marie had found a new passion. She went on to study at the Himalayan Institute of Yoga Science and Philosophy in Pennsylvania and became a certified yoga therapist in 1986.

For the last 25 years, Dee Marie has been in Boulder working with people of all ages and abilities, teaching yoga and offering yoga therapy to people with brain injuries, kids with disabilities and others.

Dee Marie first implemented the CALMING KIDS program in Boulder Valley schools, but it quickly expanded into Summit County, Denver, Arvada and most recently Jefferson County. And it’s spread internationally as well. Dee Marie has developed an extensive training curriculum bringing educators from Mexico, Colombia, Puerto Rico and Palestine, among others, to train in Boulder.

“My mission is to get yoga to everybody and anybody,” she says. “Yoga is not a system of exercise. In classical yoga we do movement in order to get our body comfortable. We do yoga in order to regulate our breathing. We do mindful meditation and concentrations to focus the mind. In classical yoga, we look at our communication skills and how we’re appearing to the community.”

She’s also written several activity workbooks for children to accompany her classes, the first of which, “Yoga Keeps Me Calm, Fit and Focused” has been translated into multiple languages, and they are being used in schools Mexico, Central America, Saudi Arabia and Palestine.

“The more we get the body, the breathing, the mind in a calmer, more loving and more released place within themselves, the more they can handle anything that is happening in the outer world,” she says. “Negative confrontation will come to us no matter what age we are. It’s understanding just how to have a compassionate heart and the compassion that you can give to others whether they are your friend or enemy.”

Dee Marie says the goal is to make the ideas behind CALMING KIDS mainstream by 2020, hopefully decreasing violence in schools both here and around the world.

“I’ve devoted my life to it and I feel like I make this much (she depicts about an inch with her fingers) of a difference considering where it’s going,” she says. “It’s scary, we watch the media and the type of movies that are coming out, and what they are teaching the kids is to pick up a gun and shoot. So I feel like I have so much work to do.”