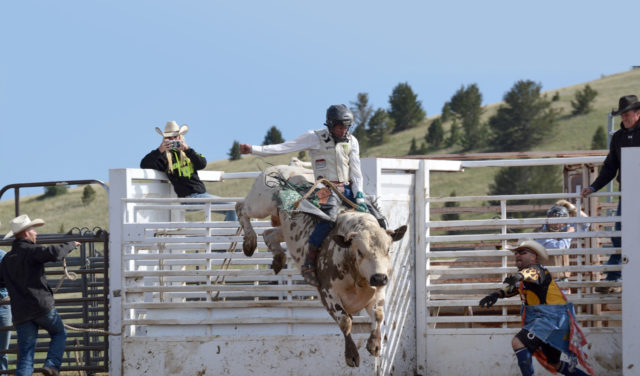 It was late February 2016, and from what Steven Wiersma could tell, the bull had to be close to 1,900 pounds, having been on the feedlot all winter.

The bull’s size certainly wasn’t stopping the Calhan, Colorado, native from saddling up and riding his way to the title at the Castle Rock Bull Riding challenge.

Wiersma had come a long way in just six years; most folks start learning to ride bulls as children, riding sheep in mutton busting contests and moving their way up through junior rodeo competitions until they’re 18 and eligible for a Pro Bull Riders’ (PBR) membership.

Now, if there’s one thing you’ve got to understand about bull riding, it’s that it’s the most dangerous 8 seconds in sports. That’s all the time a cowboy’s got to spend on top of a bull to qualify for points.

But 8 seconds is a hell of a long time atop a 2,000-pound, highly agitated animal. And frankly, that must be why some folks, like Wiersma, think it’s fun.

Despite growing up on a dairy farm, Wiersma didn’t start riding bulls until he was 24. Now here he was, 30, sitting atop a colossal bull and a couple of rodeo wins in the last year. He’d doubled his prize money from 2015, and all signs pointed to more success.

That February day he says he didn’t feel pain when it first happened, just “a weird, warm sensation.” A trip to the restroom revealed he was bleeding.

“So I went to the hospital and I told the [staff], ‘I need you guys to hurry. I’m not trying to be rude, and I know this is your job, but I need to get back to the rodeo arena at 7 o’clock,’” Wiersma remembers.

The doctor informed him he wouldn’t be going anywhere.

Instead of getting back on the bull, Wiersma underwent immediate surgery to repair his urethra — he’d torn it in two places. He’d ultimately spend 45 days with a catheter in place because the injury was slow to heal.

During his first consultation after the surgery, Wiersma asked the doctor about his recovery time; “When can I go back to rodeoing?”

“He looked at me like I was an idiot,” Wiersma says.

The doctor wouldn’t directly tell his patient that his rodeo days were over, but he made the consequences clear: Another tear in his urethra would be irreparable, and Weirsma would have a catheter for the rest of his life.

“He told me, ‘You’ve used your get-out-of-jail-free card,’” Wiersma says.

“I quit because I wanted to have a family,” Wiersma says in a phone conversation, the slight drawl in his accent conveying more sincerity and warmth than frustration. It’s been 10 months since his last rodeo.

“I’m 31 years old. I have a girlfriend; we plan on getting married and having children,” he says. “At that point [when I had the accident] I figured you can live your life or you can try to be an amateur rodeo star.”

Wiersma never intended to be a rodeo star, amateur or pro, in the first place; he wanted to play college basketball.

“That was my main goal as a young man,” Wiersma says. “I have a younger brother and he was into rodeo. Being that we were close enough in age, he was into it and I walked away from it. We didn’t get along at that age.”

After two years of playing junior college basketball for Lamar Community College, Wiersma found himself less inspired by the game. It wasn’t going the direction he wanted and he felt he had accomplished all he wanted with the sport, so, like any other young adult, he went out and got a job and set out on the rocky path to maturity.

And like most adults, he woke up one day and found himself a little lost.

“I was 24 years old. I just wasn’t doing a whole lot: hanging out, bumming, working, partying,” he says. “I was working but I wasn’t doing anything, and my brother, who rode bulls at the time, said, ‘Why don’t you try riding bulls?’ I had been on steers when I was a kid. So I went out and got on a practice bull and I was hooked. That’s all it took.”

Wiersma was so enamored that he entered his first rodeo after riding only four or five “pro-stock” bulls (more aggressive than so-called practice bulls).

But nothing stopped Wiersma from chasing his new rodeo dream. He didn’t give up his regular job as a plumber, but he practiced during the spring and summers, riding four to five bulls every week, entering contests during the rodeo season in summer and early fall.

He got better, year after year, and was starting to bring in some money from his wins — not million-dollar prize money like the pros make at the PBR, but good money nonetheless.

Wiersma was never blind to the risk he took riding bulls. As an older participant (most bull riders don’t ride past their mid-30s), he also knew his days were numbered.

“Even when it goes great there’s a good chance of getting hurt, even if you rode the bull perfectly for 8 seconds,” he says. “You could land in the wrong spot, [the bull] could step on your leg, break it.

“If you get your spur in the wrong spot you can tear your groin completely apart, you can rip biceps off the bone. You’re taking a 150-pound guy and matching him up against a 1,500-pound animal,” he says “Everybody told me I was crazy for doing it but it’s just like anything else; if you like shooting guns or you like skydiving or anything people don’t normally do, then people are going to think you’re crazy. But for me it’s my life. It’s what I woke up everyday for.”

About a year and a half before his accident, Wiersma met Sean Webley, a filmmaker based out of New York City.

Webley was in Colorado doing research for a narrative film about rodeo, catching shots on an 8mm and jotting down notes during his chats with rodeo participants and spectators. Webley happened to be at the Boulder County Fairgrounds the night Wiersma won the Colorado Pro Rodeo Association bull riding competition.

Webley had no intention of making a documentary about an actual bull rider, but there was something different about Wiersma.

“A lot of people I met were probably in the 18-25 range and had a lot of experience,” Webley says. “And [they had] a certain type of approach to riding a bull, like conquering things. And Steven [Wiersma] was more my age, basically, and he had a different approach … a different demeanor. It was interesting to see him win without any of this bravado. He has a certain amount of confidence to be able to get on the bull, but he had a different background story than most of the guys.”

Webley, like Wiersma, was around 28 back in 2014 when they met in Longmont. It just made sense to Webley to capture this moment in Wiersma’s rodeo career.

“He came across a little more thoughtful and there was more meaning to his purpose for bull riding,” Webley says. “When I talked to him initially I got a sense of that: ‘I just want to win the state championship.’ Other guys did too, but he had a different approach where he was looking for something inside of himself.”

The night they met, Wiersma says, every other participant fell off their bull. Wiersma was the only rider to stay atop the bull for the full qualifying 8 seconds.

“Sean [Webley] came up after the rodeo and introduced himself and explained what he wanted to do,” Wiersma says. “I told him … ‘If you want a rodeo athlete, find someone else. I’m just a guy who works 9-5.’”

Webley ultimately went to three rodeos with Wiersma, traveled to his home in Calhan and interviewed his father and younger brother (who, by the time, had also quit rodeo due to an injury).

The approximately five-minute documentary, Rodeo Dream, ended up winning best documentary short at the 2016 Kansas City Filmfest. It was also screened at the 2016 Docuwest Film Fest in Denver.

“I didn’t go to either,” Wiersma says with just a hint of sheepishness. “I guess I’m shy, I don’t know.

“I didn’t do this to get on TV or be on a doc or be in the newspaper. I did this because it was what I wanted to do.”

Wiersma was going to buy all of his “pro stuff” this year, namely his Professional Rodeo Cowboys Association riding permit, but plans, as they often do, have changed.

But that doesn’t mean he’s out of the game. There’s more than one way to be a cowboy.

“In two to three years my plan is to start my own company and raise bucking bulls,” he says. “It’s a way to stay in it without getting on their backs.”