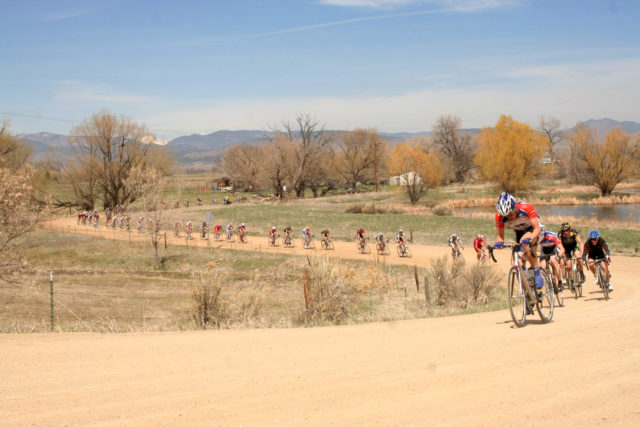 A few happy hours ago, I sat down with two cyclists to contemplate the Boulder Roubaix.

“I’m comfortable with the dirt,” Scott Forrest says. He’s more of a dirt guy — cyclocross mostly, and mountain biking — than a strict roadie. “The speed of the paved sections is always a bit daunting to me.”

Forrest has done the Roubaix before — three times in 15 or 20 years, including the last time around, in 2015. (It’s held every two years.) Over happy hour drinks that evening, he was still undecided on signing up for the 2017 race.

“It’s like doing two cross races,” Forrest says. The distance is one of the biggest hurdles for him: 74.8 miles, or four 18.7-mile laps. That’s the distance for his category — Master Men, age 40 and over, categories 1, 2 and 3 — and an extra lap longer than the last time he raced, based on his age and category at the time. He’s come to rather like the shorter distances of cyclocross competitions.

A few days prior, Clark Rider had just ridden the Roubaix course, in north Boulder, to get a feel for it. He’s more of a roadie-turned-cross guy, and although he’s also into the shorter cyclocross races, he’s on the fence as to whether to race this Roubaix for different reasons. It’d be his first time. On his training ride, he’d crossed paths with a couple on the same route. He asked if they’d be signing up for the Roubaix.

“It was the classic response,” Rider says, rehashing the exchange. “He’s like, ‘Yeah, I don’t trust roadies on dirt. I would never do a race like this because the last thing I want is to be in a pack of roadies coming around this corner.’”

That’s just what the Roubaix does: It brings roadies who don’t mind dirt and dirt hounds who don’t mind roads together, likely weeding out some of the more — how shall we say — uptight, traditional folks in the process. And for Rider, that’s the whole appeal of the Roubaix, which is 43 percent paved, 57 percent unpaved.

“That’s exactly why I’d do the race, because that’s one spot where I might have a little advantage,” he says. “Not that I’m that great at bike handling, but I just don’t worry about other people.

In 2015, Forrest actually spent a good part of the first lap leading the pack in his category, he says. He got an earful for it.

“I was miraculously at the front,” Forrest says. “When we transitioned off the dirt onto the pavement section, I was so far ahead I didn’t know what to do. I relaxed. It still took them forever to catch me.”

He waited because he knew he wouldn’t have enough “gas” to power himself through the entire race at that pace without a little help from the pack — in other words, without “drafting” off of other riders, each one riding in the low-pressure wake of the cyclist in front of them, and all conserving energy (even the leader of the pack) because of it.

“When they finally caught me, one of the guys was like, Hey, don’t do that again, man. Relax and just drop in,’” Forrest says. “And at that point I just tried to manage somewhere in the front,” and hang on for dozens more miles yet.

He describes the last few sections of the Roubaix course: a long downhill to a hard right turn, and then onto a dirt uphill, transitioning into a stout climb, and finally a leveling off onto a long, dirt straightaway. In 2015, he says, it was hard to find the right pace across all that, and hard to gauge everyone’s level of aggression on turns and descents on the dirt. That hard right turn in particular was a cluster, he adds.

“At the end, on the last lap, from what I gather, that’s where the race is won or lost,” Rider says of the section. “A lot of people just wash out.”

Crashes are not uncommon in the Boulder Roubaix, or in the Paris-Roubaix for that matter. For Rider, that’s about where the similarities end.

“Really the only connection as I see is there are sections that aren’t on pavement,” he says. “They’re racing on these cobblestones that are insane… It’s more the idea of a non-road race than it is a parallel race.”

The Paris-Roubaix, first run in 1896, was once called “the last great madness of cycling.” Slipping and bumping over uneven, often wet cobblestones at impossible speeds, riders frequently end up covered in mud and bloodied. As centuries-old cobblestone roads are gradually resurfaced, each year organizers adjust the route to maintain a high portion of cobbled roads to preserve the madness. This year the race is 257 kilometers — nearly 160 miles — 55 kilometers of which are over cobblestones. It starts in Compiegne, France, more than an hour north of Paris, and ends in Roubaix, with a few laps around the Roubaix velodrome that the race was originally intended to celebrate.

“If you win that race, you’re the fucking king,” Rider says. “The trophy is a rock. It’s literally a cobblestone.”

By comparison, the Boulder Roubaix — referred to as just “Roubaix” in cycling circles — might not seem worthy of all the decision-paralysis and stress. But it’s a special race for Boulder and for cycling. It epitomizes the surge in popularity of road-meets-dirt riding, and all the new types of bicycle models and setups to match. It’s capped at 1,000 slots, and this year — 27 years since it was first raced — it’s predicted to sell out.

As of publication, Rider is still deciding: to Roubaix or not to Roubaix? But a recent injury will keep Forrest out of the race — for now.