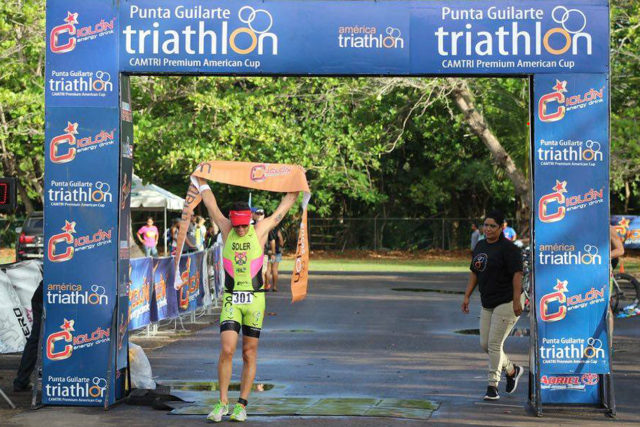 After injuries forced Soler to break away from boardsports as a teen, he became obsessed with triathlons, an oddball event that none of his peers in Puerto Rico were doing. It was an obsession that drove him to become one of his country’s best athletes in the sport and led him into a career as a coach and motivational speaker, neither of which were part of the plan, but in hindsight seem perfect for his upbeat persona and natural affinity toward people.

“I got so many injuries in my ankles because of skateboarding that I started in the gym and gained 50 pounds of muscle,” Soler recalls. “So then I had to lose some weight and started running, and I became obsessed with running. I did my first 10K and a friend suggested to me I should try triathlons. It was a sport I hadn’t even heard of.

“It was an amazing experience,” says Soler of his first race. “I never had sports in my family, and my mom told me, ‘You won’t do it, you can’t do it.’ But I like to prove to people I can do things, so I bought my first bike, it was an old bike, and I decided to compete. I was all about racing and trying to win — I went all in — and I was going so fast on a downhill biking section that I crashed. But I finished after the crash, and it was the most satisfaction I had had in years as an accomplishment. I was 17 years old at the time and it was a big, big deal to prove my family wrong.”

That first race was a turning point for Soler. Hooked on the sport, he developed quickly as an athlete, competing at the highest levels, including as a member of the Puerto Rico National Triathlon Team for the 2002 ITU World Cup in Mexico. But the pressure of elite competition along with the death of his father in 2001 proved to be more than he could handle.

“In my case sports saved my life,” Soler says. “When my dad died, I was screwed up. By 2006 I couldn’t handle all of the pressure I was going through — I just couldn’t handle it. I wasn’t ready mentally or emotionally and was more into drugs and less into exercise.”

Soler is frank about that period of his life: “From 2006 to 2009, that was my darkest period. It was three years of darkness because of the drugs,” he admits. “But in 2009 I started dealing with myself and got back into triathlons, doing races without pressure. Triathlon saved my life. Sports saved my life. I now have a new perspective about having fun more than getting results.”

Soler’s story of success then failure and, finally, redemption is not unique. But what makes his particular journey special is that his return to triathlons wasn’t just about returning and doing well (although that is part of the story). It’s that his return to becoming an elite athlete parallels his personal journey of becoming a father, mentor and a coach to both elite and disabled athletes, where the results and success of others matters more to him than any personal glory could.

This journey, precipitated by the tragedy of losing a father, was also profoundly influenced by the birth of a son, who suffers from cerebral palsy, as well as his subsequent move to Boulder.

“Puerto Rico is very expensive for medical services,” Soler says. “I went to Vail on vacation. Then we missed a flight out of Eagle, so a friend came and picked us up and took us down to Boulder. And I thought Boulder was a fake country, everyone was saying, ‘Hello,’ ‘Good morning,’ very polite and happy, and I thought immediately that this is a place I want to be. I immediately decided to check out the medical services for my kid, and the care was great and affordable, so I came back two years later. I am so glad we decided to make the step. My son is doing much better. The coaching opportunities here opened so many doors. I feel like it is home.

“It is all about my kid,” adds Soler, who credits his son for getting him involved in the International Paralympics movement as a coach. “Not too many kids want to do exercise, but that is my passion. There are not so many programs for kids to go train as disabled athletes, so that is one of my passions, helping change that.”

If Soler’s brushes with addiction and the challenges of raising a disabled child have left him grateful and more personally aware, it’s also empowered him as an athlete. National records compliment his inclusion on the Puerto Rico national triathlon team last year for 1,500 and 800 meters at the Puerto Rican Masters Swimming Championships in 2012.

“Representing my country in triathlon in 2002, it felt like nothing,” Soler admits. “But last year was huge for me, because I was 32 years old it and it was like, ‘I have big things on my shoulders wearing a Puerto Rico shirt.’ It represents a lot to me and to other people in my country and a lot of people are counting on me.”

The personal and athletic challenges Soler has faced have infused him with confidence and that, Soler says, is the key to success.

“Self confidence as an individual, that’s the key thing I’m trying to bring coaching,” he says. “Self confidence is my passion, because it allows you to enjoy the process of getting results as much as the results.”

The mentality, he says, also is a key attribute for a coach as well as an athlete. “It is a learning process in all aspects every single day,” Soler says. “Dealing with all kinds of people and all kinds of minds helps me help them. The work is individualized and personalized, it’s not like, ‘This is your training.’ The key is the confidence to work with everyone as an individual and give them the confidence that they can exceed their individual goals, just as I have.”

Through his company, Extreme Outdoor Training, Randy has had the opportunity to train a diverse pool of athletes, from disabled kids to elite swimmers to casual athletes looking to improve their performance to people who just want to feel better. These are his secrets to get fit, take control and be happy:

“Once you decide to get fit, don’t try to do everything at the same time. If you are a smoker, keep smoking. If you eat fast food, no problems. You decided to exercise, so just exercise.”

Give yourself one month

“As soon as you start with a physical routine, keep going. In one month your body will tell you can’t eat shit like fast food burgers or you can’t keep smoking. Then it’s time to diet or work on stopping smoking. Put your mind towards one goal at a time.”

“Do not sacrifice family time for exercise. Excercise can be obsessive. It’s kind of an addiction. You are working with endorphins in your body, so as soon as you start becoming obsessed, you have to make some priorities for your family. If you are starting to run every day, bring the kids every day on their bikes, include the family in the lifestyle. Or, if you don’t have a family, make time for your friends, don’t be afraid to go out and have a beer.”

And on the physical side, do not overdo things. Start doing weights on your upper body and then the next next day focus on your legs — don’t overdo it. If you don’t keep your workouts balanced, you will get injured.

“If you can afford to do it, get a coach or work with a physical trainer. They will help you maximize your workouts and results.”