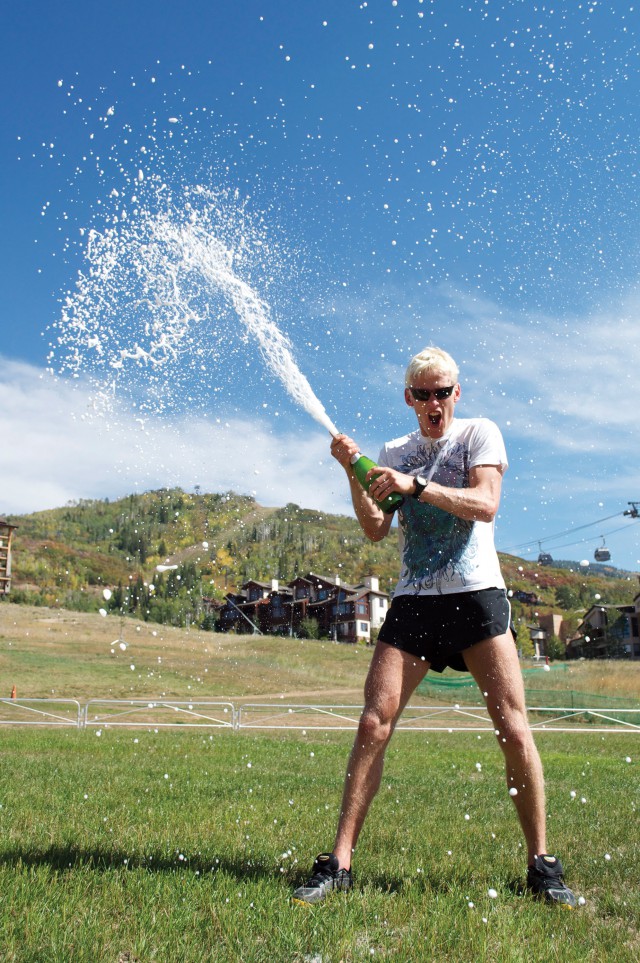 Three facts that will keep you away from ultramarathons:

An ultramarathon is longer than a marathon (26.2 miles), and can cover more than 100 miles at a time.

It’s common for men to finish the race in tears.

Before dawn on Sept. 15, more than 25 runners were missing from the sixth annual Run Rabbit Run 50 Mile’s starting line in Steamboat Springs. By the time the final runner finished at 10:20 p.m., many more would have wished they had also just slept in that morning.

But an ensemble of 180 sports-watches still beeped at 6 a.m., signaling the race’s start in the pre-dawn darkness, and the runners took off at a shuffle up Steamboat’s ski resort, a swarm of LED fireflies floating in the darkness.

In the fray were Leadville 100 podium finishers, ultramarathon veterans and greenhorn rookies attempting their first “ultra.” University of Colorado graduate Cameron Clayton, a CU cross-country veteran with blond hair bleached neon after countless hours in the sun, was also making his ultramarathon debut. But up until this moment, he had never competed in a race farther than 10 kilometers.

“I’m not worried about finishing the 50,” Clayton said before the race. “But finishing it well? That’s another story.”

While many serious runners would be satisfied with just finishing a 50-mile race, Clayton would not. There are no finisher’s medals on the Clayton mantel, and a white flag bearing the Olympic rings hangs on the wall above his bed. What he worried about was finishing in a way that counted.

Since 2007, Clayton has been running farther in a day than most Boulderites drive and faster than they ride their bikes. As an NCAA Division I student-athlete, he regularly logged more than 100 miles on his running shoes per week. In 2010, Clayton helped CU take second in the Big XII cross-country championships and 15th at the NCAA national championships as CU’s fifth-fastest runner during the 2010 season. Reflecting upon the last five years, he describes his career as “satisfactory.”

Going into the 2011 season, he reached even higher records for weekly mileage, often one-upping his roommate and teammate Andy Wacker in a contest to see who could run the most miles per week.

“Cameron’s super competitive, and sometimes he goes overboard,” Wacker said, recalling a time he told Clayton he was on track to run 125 miles in a week. Clayton ran 132 miles that week.

But after this unprecedented summer of training, injury plagued Clayton throughout his final season. He watched his teammates win CU its first-ever Pac-12 championship and secure the third-place trophy at the NCAA championships from his computer screen in Boulder.

When he graduated in May, there were no lucrative sponsorships for him like there have been for CU alumni such as Adam Goucher, Dathan Ritzenheim and Jenny Simpson. In August, Wacker secured a modest sponsorship from the Boulder Running Company and Adidas.

A poignant NCAA commercial states that there are more than 400,000 NCAA student-athletes and most of them will go pro in something other than sports. However, some do not leave sports easily.

“I dreamed of running professionally under a full-paid contract, as most people who are recruited to go to CU kind of dream about,” Clayton said.

After graduating, Clayton and Wacker moved into a new house and began training for ultramarathons, races requiring runners to cover more than the 26.2 miles of a marathon, with a new roommate, Ted Howard. Howard, who had completed three ultramarathons, encouraged Clayton to compete in the 50-mile Run Rabbit Run with him. Clayton continued training much like he did in college, but with a 27-mile-long run once a week.

After training for the Olympics for five years, he could have continued training on his own like his friend Wacker had, racing similar distances to the courses he competed on in college, or moved up to marathons. Why ultramarathons?

“If you look at a marathon, it’s stacked. It’s way more competitive than ultramarathons,” Clayton explained. “And I love winning.”

Running up the Steamboat ski slope, Clayton surged to the front with 49.5 miles to go.

Zeke Tiernan shared the lead with Clayton through the first six miles of dirt trails. Tiernan, a fellow CU cross-country alum and Division I 10K All-American on the cross-country course in the late 1990s, also turned to ultramarathons after college. Only a few months before Rabbit Run, he took second place in the Leadville 100 Trail Run, finishing in a blistering 16 hours, 44 minutes and 20 seconds.

When the two crested the first large hill — 3,000 feet above the starting line — Tiernan asked, “You wanna go ahead?” feeling Clayton pushing the pace.

“Yeah,” Clayton responded, and began to pull away.

At the second aid station, at 13.2 miles, Clayton jogged into the tent, shuffled through the buffet of energy snacks and sports drinks, stuffed two handfuls of gummy energy chews into his mouth, and slurped a syrupy energy drink. He ran back onto the trail with an extra kick in his stride as Tiernan, who had reduced the lead Clayton placed on him, followed seconds behind.

One of the unexpected challenges for Howard in his first 50-miler was eating during the race.

“I definitely blew the wheels of the bus in my first 50-miler,” he said.

In their hotel room the night before, he and Clayton had sifted through their race snacks on their hotel coffee table like finicky children after Halloween night in preparation for the race.

Through the 27-mile checkpoint — approaching more mileage than Clayton had ever continuously run before, yet just more than halfway to the finish — Tiernan was following, but still within striking distance. Howard jogged up, stopped and began unpinning his number. At 27 miles, he was out with hip pain.

Watching Clayton run through the halfway mark in the lead, Wacker decided Clayton could win.

“Cameron is a talented guy,” Wacker said. “He’s run some of the fastest 20-mile training runs that any CU runner has down, which is pretty good company.”

Beside the CU cross-country team, Clayton also is a member of an elite category: “The Wing Kings.”

At the West End Tavern, Clayton is known as a “Wing King,” because he is one of the few to have stomached a bucket of 50 Buffalo wings in less than 30 minutes. When the host of Man vs. Food, Adam Richman, attempted the challenge in 2008 he left 14 wings left on his plate.

“An ultramarathon is a 50-mile eating contest,” Howard said somberly the week before the race.

Around 1:30 p.m., race officials spotted the first 50-miler racing down the mountain toward the finish line. Although they could not yet read the bib number, the winner was a foregone conclusion: He had neon-yellow hair.

Clayton finished in 7:09:04 through a champagne downpour provided by Wacker and Howard. He beat the old course record by two minutes, and the second-place finisher by almost 40 minutes. Tiernan finished in 7:48:40.

With a first-place finish at the Run Rabbit Run 50-miler comes automatic entry into one of the most prestigious and competitive ultramarathons in America: the Western States 100 Mile Endurance Run.

Although he’s never run a 100-mile race before, Clayton remains optimistic about his chances, will race Club Cross this fall, and will begin training for Western States, which is in July.

“I went into running because I was kind of good at it and could win,” he said. “And I really like winning.”