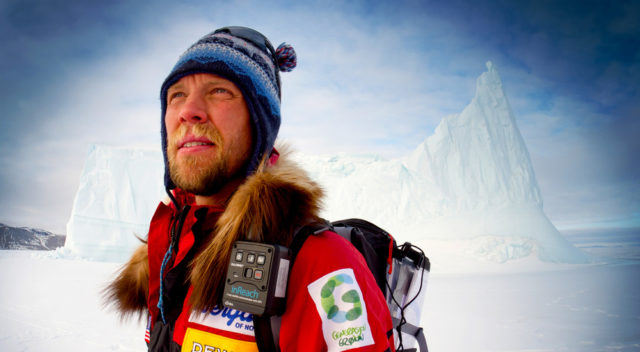 When you’re talking to John Huston, you wouldn’t think he’s crazy — at least not at first. His voice is even-keeled and gentle as he explains how he and a team of Norwegians took a 72-day, 1,400-mile expedition by dogsled and ski to recreate the first successful trip to the South Pole. Like the team Roald Amundsen led, Huston and his band of explorers carried only 1911-style food, clothing and equipment.

Then he casually recounts another full-length ski expedition to the South Pole at the end of 2007, navigating 720 miles over 57 days.

In 2009, he and Tyler Fish were the first Americans to take an unsupported (there were no resupplies on the journey) ski expedition to the North Pole. In 2013, he and a team skijored through 600 miles of Ellesmere Island in Canada, retracing century-old expedition routes and documenting the Arctic frontier.

And he seemed so normal at first…

But then an infant lets out a little half-hearted cry in the background — one of those perfunctory pouts children produce when they are just a little vexed — not because anything is wrong, but because dad’s on the phone.

Huston’s a father and a husband. He lives in Evanston, Illinois, where he works at Northwestern University. Granted, his job at the university is to oversee an outdoors program, but it’s still a fairly normal job.

Huston’s polar exploits have landed him on a small panel at the Conference on World Affairs called Mind Over Matter: Strength and Fitness.

“I think the mind over matter piece is a really interesting topic because it is so easy to be negative or feel like you don’t have control over variables in life — in an expedition or at home.” He pauses and turns his head away from the phone.

“Don’t pull on that… come here… reach back there and grab it.”

Parenting is an everyday adventure, the seemingly mundane kind that we tend to take for granted. It’s another journey where “mind over matter” becomes a mantra, a battle cry.

For his polar expeditions — perhaps his parenting, too — Huston lays out long-term training plans where the work and conditions are similar to those he will face on the actual excursion.

“I think it’s important to have progressions to not get overwhelmed. Overall success builds upon small successes,” Huston says.

He points to his North Pole expedition with Tyler Fish. They knew the sleds for their actual trip were going to weigh in at around 300 pounds, so during their year of training, they pulled sleds that were 375 pounds.

“We put ourselves through the wringer intentionally so when we started the expedition we would feel comfortable,” he explains.

Maybe Fish and Huston weren’t exactly comfortable, but their training created a sense of confidence, an understanding that this madness was manageable.

Confidence is key on an expedition with a notoriously difficult start. The vast majority of expeditions to the North Pole fail within the first week; there’s very little sunlight and temperatures hover around minus-50 degrees Fahrenheit while massive rubble fields create an ice-block obstacle course.

But it’s not just these otherworldly ventures that require preparation and confidence. Life in general offers us problem after problem, and much like the icy rubble of the North Pole, we have to navigate the obstacles to reach our destination.

“It’s easy to be negative, and negative energy spirals upon itself very quickly,” Huston says. “Whatever you’re gonna do, give yourself the chance to be successful early on. If you’re gonna run 3 miles and you’ve never done it, run the first mile and be comfortable with that success. With big mental challenges, the key is to break them down into small pieces. Our mantra for the North Pole was ‘slow, steady and safe.’”

Still, it’s easy to wonder why anyone would put themselves through such extreme scenarios. There’s glory, sure, but there are other ways — ones that don’t threaten life and limb — to achieve glory.

No, undertaking an adventure should always be about the experience.

Huston will sit on another panel to discuss the importance of adventure — all adventures in life, big and small.

“On a smaller level, I think adventure is a great way to detach from the freight train of society,” he says. “There’s so much info coming at us from computers and cell phones, telling us what to do and what to think about. Adventure gives us choice, freedom from the tentacles of everyday life, and the opportunity to develop and gain perspectives.”

Lena Gutschank, a world-renowed circus performer and producer, will join Huston on the Importance of Adventure panel.

“Adventure is a big word,” Gutschank says. “I kind of feel like adventures only exist in the future. You think of something that seems challenging and exciting to you and it sounds like an adventure. It’s the unknown and you’re uncertain of how it will go. It’s hard to know if you’re prepared for it.”

The German native found herself enamored with circus performance at age 4 after seeing a youth circus program. She began training at 8 years old, particularly in contortion, and headed to Berlin — a five-hour drive from her hometown — to attend the National Circus School.

“It sounded very adventurous to many people around me when I told them, but then I feel like once I started that adventure, it kind of just became little events that came one after the other,” she says. “You’re just living in that moment. If I’m thinking about my first days at circus school, you arrive and you have a little room in this boarding school house. You unpack your suitcase then it’s the next day. You have to get up, you have to brush your teeth, pack your stuff, know where to go and then you go. It’s kind of hard to still feel the adventure in every day life once you’re there.”

Gutschank believes there are three phases to an adventure. The first one is to decide to do it. This is the ice-block rubble field Huston encountered in the North Pole — you can sink or swim here, move forward or turn around. It’s easy to just say no or to avoid the challenge out of fear and uncertainty.

“But [there’s also] the excitement and the hope that you come out of this adventure maybe differently or with a different experience,” Gutschank says.

The second phase is the adventure itself. You’re in the middle of it now, whatever it is, and you’re pushing through. It becomes a chain of events, and perhaps becomes a little difficult to remember why you’re doing this in the first place.

“The third phase is how you reflect on what you’ve experienced,” Gutschank says. “Coming back to the question of why adventure is important; I think it’s that reflection that you do afterwards. How was I before I started this adventure and how did it change me? What did I learn? What surprised me?”

Gutschank explored a new facet of circus performance last year when she was given the opportunity to produce an entertainment project in Japan.

“I would definitely call it an adventure, even looking back at it simply because it asked things of me that I wasn’t sure I was able to do,” she says with a laugh. And this is a woman who isn’t afraid to do acrobatics from a hoop hanging 50 feet in the air.

As Huston says, “Adventure keeps life interesting, that’s for sure.”