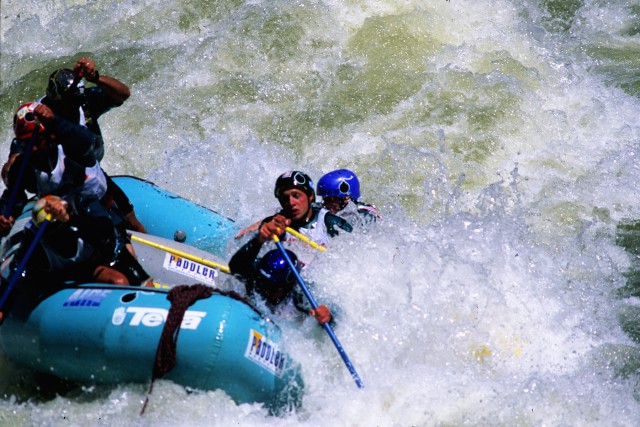 The summer solstice means many things. For some, it’s a chance to delve into their pagan roots. For others, it’s an excuse to have a party. And this year, after one of the deepest winters and wettest springs on record in the high country, it’s the start of what looks to be one of the best — and longest — rafting and kayaking seasons Colorado has ever seen.

Colorado’s epic winter has left the state poised for a big water year, and with cool temperatures the norm late into spring, the season has been primed for excellence. The average snowpack across Colorado has been measured at 248 percent of average, with some areas along the Continental Divide clocking in at 359 percent of average. That’s a huge amount of snow, and with a delayed summer (more than eight inches of snow fell Sunday night at the top of now-closed Loveland Ski Area), the snow has been stacking up instead of melting.

But melt it will, and the potential has whitewater enthusiasts drooling.

“We’ve gotten record snows, which translate into record water flows,” says Boulder Outdoor Center’s Eric Bader. Furthermore, according to Bader, “the water is having a pretty even melt, at a nice, reasonable rate. This is fantastic for river running.”

John Seelig, owner of Lakota Guides in Eagle County, says the year so far is better than expected.

“Last year we had a really warm flash, but this year we’ve had a cool May and June, and the water has maintained,” he says. “It’s fun because a lot of people who come out at this time of year don’t get the epic water. But this year is different. It’s a perfect level for us. The water has hung out at the more adventurous level.”

With the water this good, people are taking the plunge. According to the Colorado River Outfitter’s Association, things are busy, with bookings up 11 percent over Memorial Day.

And the fun isn’t going to end anytime soon.

“The middle Eagle section’s normally only open two weeks,” says Lakota’s Seelig. “It’s been open a month, and we are anticipating another month.”

That’s exciting news given the fickle nature of the Eagle.

“If you want to experience the Vail local rafting runs, it is at the perfect level,” says Seelig. “I’d tell anyone to do the middle Eagle. You can’t usually experience the middle Eagle section at the levels they are now. It’s really tough. You can’t plan on getting up here and having the water like this, but we’ve maintained a perfect level, and you can call and book your trip this year and know a week in advance that the water is going to be great.”

Bader agrees. “We’re expecting excellent water through July, and maybe even into August,” he says, noting that local rivers such as Clear Creek outside of Golden and the Cache La Poudre outside Fort Collins are perfect for day trips right now.

Still, Bader cautions that the extended above-average flows are to be respected.

“We don’t run certain things above a certain level,” adds Seelig. “Dowd Chute near Minturn is great. It’s like being shot out of a cannon. But right now we’re not running it. It can be run at these levels, but if something goes wrong there, it’s a nasty swim.”

But Seelig says that the Chute will come into form soon, and there are other options aside from rafting, like kayaking or the latest trend, stand up paddleboards, which also offer the chance to get wet and have fun during one of the best runoffs in years.

“Kayaking is fast and fun,” says Bader. “It’s like driving a sports car.”

Bader says that the Boulder Outdoor Center has been teaching kayaking for 31 years and that once you learn, it is amazing.

“You can go to so many cool places and paddle in places that can only be reached by the river,” he says. “You see so much wildlife, the sound of the river covers your approach, and you can really get close.”

And for those who want to try the newest thing, there’s the paddleboard.

“River paddle boarding is exploding,” adds Seelig. “That’s what the river community is jumping on. For those people who have tried kayaking, paddle boarding on rivers is the newest thing.”

But regardless of how you get wet, with its epic runoff, this is the

summer to do it. Sure, there’s the adrenaline-filled rush of rafting Clear Creek or Dowd Chute, but Colorado’s rivers offer a lot more, even for those who like things a bit more sedate.

“I love ’em all,” says Bader of Colorado’s rivers. “There’s such a great diversity, from the canyon walls of the Yampa River to the ponderosa pine forests of the upper Dolores. There are fantastic desert runs and steep creeks and mellow float trips.”

And there are even beer trips, in which Bader and the crew at the Boulder Outdoor Center take you out on the river in canoes for beer tastings.

While Coors may or may not be on the menu, there’s no doubt that Adolf Coors, a fan of Colorado’s rivers, springs and rushing waters if there ever was one, would approve.