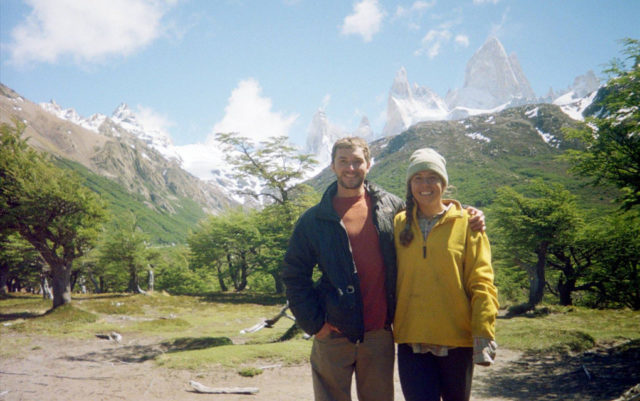 It’s a curious thing, the way sound bounces off rock. Cup your palms around your mouth, scream into a canyon, and on a still day you can hear your words travel as they jump between walls, softening with each impact like stones skipping water.

Some rock faces act like amplifiers. Once, while climbing the Diamond on Longs Peak (the 14,000-foot mountain’s east face, which fans up from the Earth like a giant granite wave), I shouted up at Jordan, my climbing partner and then-boyfriend. He was almost a full rope’s length above me, nearly 200 feet away. Normally when climbing long pitches outside, you have to deep-belly shout to be heard over the elements, but not on the Diamond. My voice floated up with eerie ease. As I climbed up, voices from other people climbing different routes on the far right side of the wall sounded as though they were hanging right next to me.

There were six of us on the wall that day, working our own paths up this massive vertical maze. I was the only woman, insofar as I could tell by the voices, which I didn’t mind until I started crying — until everyone heard me crying. I went from feeling like the day’s badass female ambassador to feeling like I’d betrayed every woman climber who’d ever lived.

What lay before me — a terrifyingly exposed and run-out (thinly protected) traverse — wasn’t the sole cause of my outburst. Like how arguments between couples at the grocery store are never actually about picking out the wrong kind of cereal, I was so mad at Jordan on so many levels, I screamed.

Jordan and I had met in Argentina, in a 16-person hostel in Bariloche, a small town on the northern Patagonian frontier. I was 19 and he 22, both of us traveling long-term and solo in the region, saddled by nothing but our backpacks and the weight of dreams. It was our kind of romantic: neither minded the other only had one change of pants; that our budget registered mere dollars per day; that we’d sometimes sleep behind gas stations. We had cans of tuna, tanned faces and a fierce sense of common direction: south, traveling together, and up vertical rocks.

That was in 2014, and initially, to be honest, I never thought I’d see him again. But one night in Bariloche, shortly after we’d met, a storm came in and we ran down to the lake as thick raindrops pummeled the street. The inky waves roiled. Wind howled. We kissed as lightning lit up the black sky in purple and brown flares. The next morning I tore out a page from On the Road and wrote him a letter. The last paragraph read:

“We opened our arms like condors, feeling the storm pass all around us, eyes wide and mouths stretched into dopey grins, harnessing the violent energy for ourselves. In that black and thermal moment, we looked at each other and kissed. We weren’t cold. We were the storm. We were the raw energy of life. And so that moment was ours. Ours to dig, ours to feel, ours to pull into the recesses of human experience, for we were alive to feel that moment. Alive to be human. Fleetingly mortal.”

Two months later, I left Jordan at a gas station (we’d been hitchhiking) and I returned to the U.S., to Rhode Island, so I could finish college. Jordan stayed in Patagonia, though it wasn’t long before we were chatting regularly over Facebook and eventually the phone.

The summer of 2015, I moved out to Denver, into the basement where he’d been living since his stateside return. When I left him again a couple months later, to return again to Rhode Island at the beginning of fall, he wrote me a letter:

“When the time comes for you to take that next step, the American West will be here if you so choose. It is a land of perpetual exploration and new experience. It is the stuff that makes me move without hindrance. If you choose to move in the direction of the sun, I’ll be here with you. Love, Jordan.”

I folded his words into my journal and carried them with me everywhere I went. Over the next 18 months, we loved each other mostly from afar, no matter how many times zones our voices had to travel.

At the beginning of 2017, I finally graduated and we moved into an apartment together in Boulder. It was winter, and we bought used cross-country skis because we couldn’t afford anything for downhill. When the snow finally melted, we packed our climbing bags and fitted Jordan’s work truck with sleeping bags and five-gallon jugs of water.

It was at the end of that first summer in Boulder that we climbed the Diamond and I broke down on the wall. My frustration started at its base.

The thing about Jordan is that he’s strong, but even more than that, he’s spent the last 10 years critically understanding his climbing body. He’s comfortable with climbing risks in the same way a tenured chef is comfortable subbing ingredients on a recipe’s first go: conservative but bold.

Jordan had already climbed the Diamond seven times and had given me the impression that soloing the approach up to the first ledge (ascending without any protective gear) was commonplace. We started, me first, kick-stepping up a snow slope to reach the rock, then carefully moving up a rocky chimney — one foot in snow, the other on wet rock, both hands placed for balance while trying to calibrate the 40 pounds of gear I carried in my backpack. It was scary, and I was afraid.

I couldn’t solo the pitch. But I wanted to. I wanted to keep up and not hold Jordan back. As my ineptitude and discomfort clashed, anger sprouted. I felt forced to explicitly address my comparative weakness and unease, and of course my ego reeled. As Jordan’s girlfriend, I wanted him to see the climb from my perspective, to spare me from the feeling of not good enough.

So I accused him of intentionally disregarding me even though I knew it wasn’t intentional — though we’d climbed big walls together before, he’d always climbed particularly challenging objectives like the Diamond with partners that matched his strength and style. This was a first for him. He looked just as scared as me.

When we reached the middle of the wall, about three hours and 700-vertical feet later, he’d left a traversing section run-out (if I’d fallen, I would’ve swung down like a pendulum and bashed myself against the wall). I couldn’t think of a reason why he’d led me into this terrifying predicament. Then I cried.

By the time I climbed up to him (without falling), I was so mad, my narrow point of view obstructed the hurt on his face.

To finish the climb’s last 600 feet, you have to scramble up what’s called Kiener’s Route — a less technical but still high-stakes section, which (after what’d happened at the wall’s base) I didn’t want to assume was easy, despite Jordan’s announcement that most people didn’t bother placing any protection. So when Jordan started scrambling up, I took a deep breath as my ego reeled again, and called after him. He came down and tied back into the rope.

Jordan climbed first, then belayed me up. When I reached him, I realized he’d only gone half way. I looked up at what remained until the summit, and burst into tears again. I tried to summon the confidence to say, “I can’t solo this right now,” asking him to tailor the experience for me when I just wished he could have intuited my needs.

“Why did you stop here?” I asked, instead, accusatorily.

“I thought…” he started, and immediately understood: I did not see what he saw. His face fell, only held up at the corners by the remains of his frustration at my anger and distrust. We both felt betrayed.

I felt so lonely up there in that moment and as I stepped up and around him in order to solo the final goddamn blocks, I muttered something I regret to this day: “I hate you.”

We each climbed to the summit alone.

On top, we sat in silence. It hadn’t hit me yet, the magnitude of my words. He didn’t need amplification for the point to sink in. I cried softly. The granite absorbed my tears.

The next morning, I wrote Jordan a letter, and I gave it to him in a sealed envelope with a date: Aug. 21, his birthday. He couldn’t open it until then, 11 months later.

Winter came again and we watched snow pile on Longs Peak. For Thanksgiving we drove to the Utah desert and camped out in shadows of Indian Creek’s sandstone with a host of friends. The day before the holiday, Jordan and I climbed (without fanfare) the North Six Shooter, a freestanding tower. On the summit was a ring box, inside his mother’s old ring. I slipped it on my finger and jumped into his arms.

Once the snow melted off Longs Peak, wild flowers popped up. At the end of summer, nine months into being engaged, Jordan opened his letter:

“Today we climbed the Diamond for the first time together. It was a shit show. I cried. You cried. I completely broke down and dragged you deep down with me. But you know what? If you’d asked me to marry you while we stood on the summit, I would’ve said yes, 100 percent. I love you.”

The winter and early spring of 2019 got a lot of snow. We planned our wedding as the ice fields melted, and 18 months after climbing the North Six Shooter, we gathered a hundred of our friends and family along the St. Vrain Creek in Lyons.

When we stood in front of the crowd, the creek gargled behind us. I looked west, upstream, and imagined tracing the St. Vrain back up into the mountains, winding through Ponderosa pines, around granite blocks, through the alpine shrub. If you follow it all the way up, you reach the base of the Diamond. I thought back to my tears on the summit, soaking into the stone — maybe they were in the creek now, rushing past us.

I took a deep breath and stared into Jordan’s eyes. Loving and being loved by the same someone is perhaps the greatest adventure of all.