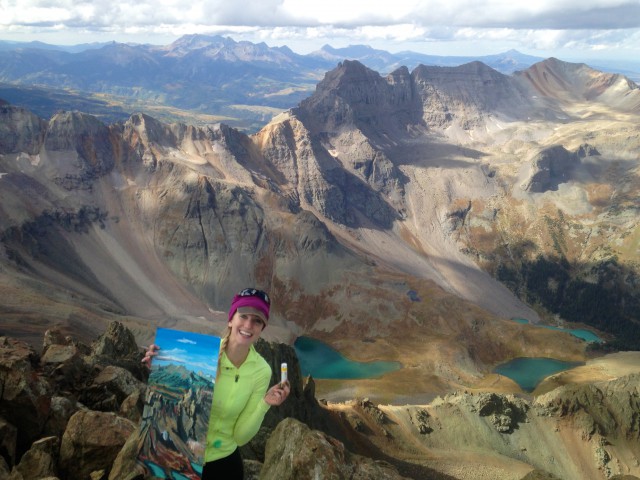 Reaching the summit of a 14,000 foot mountain, a 14er, fills people with a sense of accomplisment — the fresh air, the beautiful view, the aching muscles. To have a token for their hard work, most people take a snapshot, but artist Lisa Martin paints a picture instead. Martin is on a mission to climb and paint pictures of all the 14ers in Colorado.

“The painting tells the story about my experience of going up and finding the view that I think is most beautiful,” Martin says. “You see what the mountains look like in the distance and what they look like in the foreground. You don’t really notice that when you’re not painting them. There are subtle things I would have never noticed. It forces you to be in moment.”

Martin grew up in Fruita, in western Colorado, where she was never very interested in hiking or the outdoors. Her interest in art was sparked in second grade when she attended an art festival and saw a vivid painting of a cat standing on a wooden plank. That day she went home and started drawing cats, and since then she says she knew she wanted to be an artist.

At the University of Denver, she majored in studio arts with an emphasis in ceramics. She sculpted mainly large-scale animals, and even a life-size cow. She didn’t really focus on painting because, for one, she wanted to keep her artistic freedom.

“I didn’t necessarily like people telling me what to paint,” she says. “I wanted painting to be something fun and enjoyable for me.”

Her 14er adventures started in 2011 because of Albert Bierstadt. When her friend asked her to climb Mount Bierstadt, Martin was excited to join because he’s one of her favorite painters. She wasn’t really a hiker, saying she never really cared for it. She had also just gotten back from sea level, so it wasn’t a very fun excursion for her.

“I didn’t particularly enjoy it because it was my first one and I wasn’t prepared,” Martin says. “I didn’t know what I was getting myself into.”

After the hike, she made a 50-inch oil painting of the summit from a photo she took. She says she was inspired by the history behind the mountains and artists.

“In the 1800s, artists were also explorers and they were a big reason for western expansion,” Martin says. “So I fell in love with the idea of painting these mountains that explorers/artists, who I really looked up to, were painting. I made it a goal to paint all of them.”

She did the same process with the second 14er, hiking then painting a picture afterward, and it took her a year to complete. Since it was taking so long, she knew she had to figure out a solution.

“I realized that it was a big project that I wasn’t going to get done in my lifetime if I was doing one a year,” she says. “I had to come up with a way to paint them quickly. Then I thought, wouldn’t it be fun to paint them at the summit? I’d finish right then and there and I would have this experience and memory in a painting.”

So she spent this past winter practicing 30-minute paintings to attempten plein air painting, which means “in open air.”

“I painted my entire life, but not with much formal training,” Martin says. “I set a timer and had to start and finish. It was definitely a brain exercise. Having to think about the beginning, the middle and the end is a lot different than being able to look at something over a few days.”

This July, she did her first 14er en plein air on Mount Evans, selected because she could drive to the top and see if her plan would work. Martin had several questions about how the paint would react with temperature and altitude, but in the end it worked out fine. Her biggest insight was about her unstable subject.

“It made me realize how quickly the weather changes up there in terms of lighting,” she says. “You can be looking at the summit and painting it and in 30 seconds it’ll look night and day opposite, because at that altitude the sun changes in a snap. So you have to improvise, and you have to remember what you want to paint.”

Funny enough, Martin never wanted to be a landscape artist or a plein air painter. But now she’s both, she says with a laugh.

Before embarking, Martin researches the summits so she can mix out the colors she’ll be needing. She brings a lightweight 1-by-2-foot wooden board, small tubes of acrylic paints in every color on the color wheel, a bottle of water to rinse out her brushes and paint markers, which help paint unique details like buildings on top of Pikes Peak. She says it’s a little bit of extra weight, but not too much to handle.

There is no deadline for Martin when she’s painting a summit. She has spent up to an hour and 15 minutes, and down to just 10 minutes on Mount Yale when it was snowing heavily. She wishes she spent more time up there, but she says being on the summit longer for more than 30 minutes can be cold and miserable. So instead of concentrating on the time, Martin focuses on her feeling.

“I like to tune the world out and just go,” she says. “The more you learn about mountains, the more you get a deep connection when you’re on top of them.”

With plein air painting, there’s not a lot of time for perfection. So Martin says she has to work with her errors and embrace, what Bob Ross calls, “happy mistakes.” There’s no time to analyze or process, she says, so you just have to take the results, good or bad.

“Every time I paint one of these and I come home, and I don’t even take it out of my pack because I already hate it,” she says. “I don’t want to look at them for at least a week because I think, ‘Oh I could have done that or that, or should have done this.’

“Sometimes it still irks me, and I just want to go back and paint over it. I am a perfectionist. I always have little bit of a panic attack halfway through painting them, worrying that I’m going to ruin it because I don’t have much time left.”

Her biggest regret with her time constraint is a lack of fine-tuning of her pieces, Martin says, but the time limit can also be helpful.

“I love details. I wish I could put every ridge and tree, and every single highlight and shadow and reflection and make the clouds complete,” Martin says. “So it’s like making myself let go, which is probably a good thing.”

There’s a lot of buzz around Martin’s paintings. She’s gotten several inquiries from people who want to buy them. She says everyone seems to have a specific mountain that they’re attached to.

“It has to do with your experience of going up them, who you went with, the weather, how you felt that day, your energy level — all those things combine to whether you like that mountain or not,” she says. “Some mountains aren’t necessarily the most beautiful, but there’s a lot of personal attachment to it.”

So far, her favorite mountain she’s painted is Mount Sneffels, where the climb was pleasant, yet challenging. The San Juan Mountains are unlike other ranges in Colorado, she says, and have unique angles and lines for painting. She went in the autumn, so the colors of the leaves and lakes were all very vivid.

It used to be Martin’s goal to be a full-time artist, and it might be in the future, but right now she’s going back to school for mechanical engineering.

“I’ve noticed that I actually enjoy doing artwork more when my brain is occupied with something else,” she says. “Now it’s like I get to do this, instead of I have to do this. I have painted more these last couple years of not doing art as school or art as a career than I ever have.”

If you’ve got your eye on one of Martin’s paintings, you’ll have to wait a bit longer. She doesn’t plan on selling them until she’s finished all of them and can display them together. She’s done 13 of the 53 14ers in Colorado, and her loose goal for the project is to finish it when she graduates, in the next two or three years. She says she hopes to take the next summer off and finish a large chunk of them.

Through the process she says she’s grown to love hiking and has gained a real appreciation for the mountains.

“True plein air painting captures something different than a photo can,” Martin says. “You can add different elements and different angles in to show the overall feelings of the mountain. I was really concerned when I started the project that they would all look the same at the top. But when I put the paintings all next to each other, they all look so surprisingly different.”