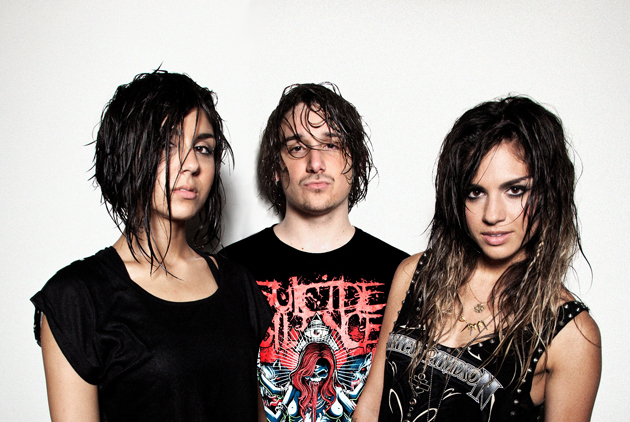 When Krewella first started talking about signing to major label Columbia Records, the group left no room for confusion on its demand for creative control over its music.

“That was a huge priority,” says Yasmine Yousaf, one of Krewella’s two singers. “When we signed to Columbia, it was one of the first things we said. It was like ‘Guys, we’re really headstrong. We’re kind of the assholes if you want to take the creative shit away from us. We are completely in control, and that’s that. We put our foot down. And they’ve been so respectful. They didn’t even think of stepping on our toes. They were like ‘Guys, you do your thing and we just back you. You have our full support.’”

That kind of independent streak has shown up throughout Krewella’s career in much of what the trio from Chicago has done, from how they’ve made their EPs and albums to how they’ve carved their own stylistic path, to how the group plans to change the typical electronic music game as a live act.

The three members of Krewella — Yasmine Yousaf, her sister, Jahan, and Kris “Rain Man” Trindl — met while Jahan Yousef and Trindl were attending high school in the Chicago suburb of Northbrook. Discovering a shared love for early electronic acts like Chromeo and MSTRKRFT, they formed the group, and in 2010 rented a loft in Chicago where they built their own studio setup and started making music by their own rules.

Trindl was the band member with the most experience in music, having spent 10 years playing guitar in heavy metal bands, and created beats and tracks. But the Yousaf sisters quickly emerged as the main songwriters and lyricists in Krewella — although Trindl played a major role in helping Yasmine and Jahan Yousaf develop their writing chops.

Trindl was quite a taskmaster though, frequently harsh in his criticism to the point of being a jerk toward the sisters. He relentlessly pushed them to step up their skills.

Somehow, they put up with it all, despite some resentment. Today, Yousaf says she appreciates the tough-love approach of Trindl.

“I think back to those times about seven years ago, I think about how much I sucked as a catchy songwriter, not even a pop writer, not a rock writer, but as a songwriter in general,” she says. “I was just writing on a whim. I thought I was pretty OK and I thought I knew what I was doing, but I’m so thankful that he was an asshole because I wouldn’t write the same way I do today.”

In particular, she says, Trindl changed how she thought about songwriting.

“He wanted me to think about every melody I was making,” she says. “He wanted me to think about every note in correspondence to the next note. And I never had thought of melody that way. I would kind of just come up with something and stick to the first thing I thought of. There was not ‘Oh maybe I could write something better’ or ‘Maybe this isn’t a great melody.’ It was just the first thing I thought of, I would just write it down and that was it. I always thought my lyrics were pretty OK in the beginning, and he thought so, too. It was more my melodies [that needed work].

“And the funny thing was Jahan’s melodies were stronger in the beginning, but Kris told her to work on her lyrics,” Yousaf says. “So we both had opposite faults and really helped each other grow. And I think, now at this time period in our lives, we’ve somehow balanced each other out and we’ve learned so much from each other that we’re kind of on this level playing field now.”

The quality of the music and the group’s lively approach to performing has helped Krewella quickly rise through the EDM (electronic dance music) ranks, moving up from shows around Chicago beginning in 2011 to touring nationally and internationally — landing slots at such major festivals as Australia’s Stereosonic and Miami’s Ultra Festival.

Along the way, the group released its debut EP, Play Hard, in 2012, followed by a remix EP, Play Harder. It was at Stereosonic and Ultra that Krewella first introduced live vocals (by the Yousaf sisters) into their performances — a rarity in the EDM world, where even if DJs have vocal songs, they almost always perform only to recorded tracks. Now Krewella is stepping up its live vocal show as the group tours this spring.

“It’s actually taken a lot to get into [live vocals] just because nobody else has really done it before,” Yousaf says. “So we had no one to emulate, no one to go off of. There was no model for this. We had to create the model ourselves. And it’s been really hard to kind of figure out how to incorporate the vocals into a DJ set, still keep it very much in the DJ world, yet still have the live vocals come through and have it feel right, not awkward or random. So we’ve had a lot of prep time on this one.”

The strong vocal presence of Krewella’s music (it’s a central element to the songs on their newest album Get Wet) is one element that sets the group apart from other electronic acts. But there are other contrasts. As much as Krewella has been associated with the EDM scene — and has signatures of the genre with its reliance on programmed beats and pumped-up synthetic instrumentation — Get Wet sounds like it could fit in with Top 40 dance pop (think Lady Gaga or Rihanna).

The group’s music features choruses, strong vocal melodies and pop song structures to go with the kind of amped-up synthetic instrumentation and driving dance beats that are common in EDM.

The first single from the Get Wet album, “Live For The Night,” as well as tracks like “Come & Get It” and “Enjoy The Ride” and are prime examples of Krewella’s catchy, high-energy sound. What helps the album is some songs, such as “Ring Of Fire,” “Pass The Love Around” and “Human,” vary intensities quite a bit, and this provides breathers from the relentlessly big sound of songs like “Live For The Night.”

Yousaf says she’s proud that Krewella may have created a sound that bridges the gap between Top 40 and edgy EDM.

She also isn’t letting herself worry about whether EDM fans might be upset if Krewella does break through to the mainstream and reach a mass audience.