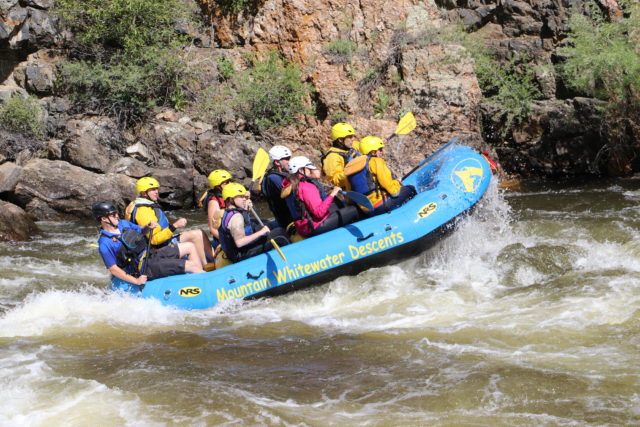 The river had dropped two feet in as many days prior to our excursion, our guide told us. But the water in the Cache la Poudre River was still dynamic as it flowed through the canyon from its headwaters in Rocky Mountain National Park and into Fort Collins.

In celebration of the 50th anniversary of the U.S. Wild and Scenic Rivers Act, the local advocacy group Save the Poudre hosted dozens of people, including journalists, for a rafting trip on June 23. The event was one of 20 happening throughout the summer around the country, sponsored by Toyota U.S.A. through the national Waterkeeper Alliance, in support of local Waterkeeper organizations like Save the Poudre.

Despite widespread drought in the West and near-record low snow levels this year, it was the perfect Saturday for a 12-mile rafting trip down the canyon.

While I’d seen the river many times from its bank, maybe wading a few feet in, floating down the middle, pushed and pulled by the currents, was a new experience. There were moments of pure serenity, as we gazed at the cliffs hovering above, and floated silently. Other moments were adrenaline inducing, as we navigated through class II, III and IV rapids with help from the Mountain Whitewater guides. The sun was out, helping battle the frigid yet refreshing water temperature.

The Wild and Scenic Rivers Act was created by Congress in 1968 to preserve free-flowing rivers recognized for their outstanding natural, cultural and recreational values. It now includes 12,734 miles of 208 rivers across the U.S., or less than one quarter of 1 percent of the nation’s rivers. In contrast, 600,000 miles — about 17 percent — of America’s rivers have been modified by large dams. With 107,403 miles of river in Colorado, only 76 miles of the 126-mile Cache la Poudre River is officially considered wild and scenic. Designated in 1986, the Poudre is the only Wild and Scenic River in the state of Colorado.

Still, 63 percent of the Poudre’s water is diverted to farms and cities before it ever reaches downtown Fort Collins. And as it grows, the City of Thornton has been discussing a 70-mile pipeline to divert more in coming years (although conservationists criticize the plan). A contentious proposal to create two reservoirs on the Poudre, known as the Northern Integrated Supply Project (NISP), is currently waiting for the Army Corps of Engineers to release its final environmental impact study (expected any day), to see if the project will move forward. If approved, it would further deplete flows in the river, especially in May and June, right as rafting season is at its peak.

But the event on June 23 wasn’t about Save the Poudre’s dam and diversion fighting efforts, and there was no overt talk of water policy. It was about celebrating the protections we still have in place for the river, protections that allow groups like ours to explore the river and be awed by its raw power and undiminished beauty.