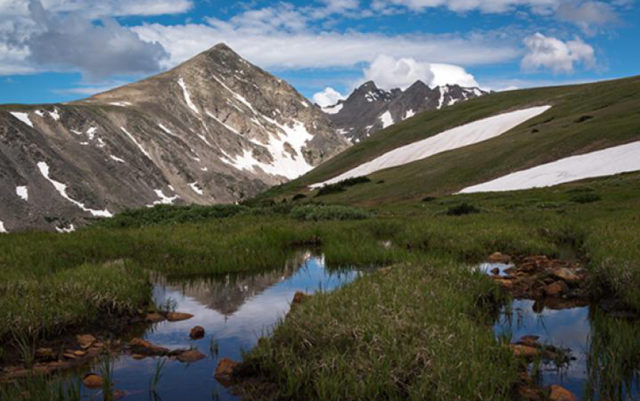 Colorado is known for its beautiful and formidable high alpine regions of the Rocky Mountains, landscapes that are strong and adaptable to harsh weather, yet still abundant with plant and animal life. In the 1970s, as Boulder started to grow, scientists began to notice that the air pollution from this spike in population and industry was causing acidic precipitation that directly impacted the health of the alpine ecosystem. After 50 years of synthesizing data collected at CU-Boulder’s Mountain Research Station on Niwot Ridge, researchers are now reporting decreasing acidity in surrounding high alpine areas of the Rocky Mountains.

Research recently published in the Journal of Geophysical Research: Biogeosciences by Jason Neff, director of the Sustainability Innovation Lab at Colorado and a CU environmental studies professor, and two other colleagues, shows a unique trend: Reducing vehicle emissions (although nowhere near the level necessary to avert climate crisis) has lowered acidity in our alpine landscapes. Drawing on research collected from the Niwot Ridge Long-Term Ecological Research study area since the 1970s, Neff and his colleagues tracked the effects of nitrogen and sulfuric acid precipitation on the watershed over the last 50 years, detecting dropping acidity levels since the early to mid 2000s. This research was bolstered by data on atmospheric deposition (pollutants deposited on the Earth’s surface through rain, snow, etc.) and stream water chemistry from the Mountain Research Station between 1984 and 2017.

Air quality regulations implemented along the Front Range in the 1970s — which have become increasingly stricter since — are notably reducing previously unchecked emissions. We’re seeing the benefits of those regulations as a natural acidic balance is being restored.

“A big concern in the ’90s and 2000s was that the Front Range was developing really quickly,” Neff says. “We were producing a lot of emissions, and we were seeing evidence from other places who were also experiencing rapid population increases that the rise in emissions can lead to extreme changes in vegetation, cause the acidification of streams and affect the natural wildlife.”

Cars and power plants are largely responsible for the increase of nitrogen oxides, which are a result of fossil fuel combustion at high temperatures. They also occur as a result of biogenic processes in industrial agriculture, particularly excess ammonium and nitrate, which are common ingredients in agricultural fertilizer. These pollutants ride warm air currents up, subsequently cool when they reach a high altitude, and form clouds that produce acidic precipitation that infiltrates soil and water sources. While nitrogen and sulfur are crucial ingredients that help ecosystems thrive, too much can be detrimental; the wildflowers and wildlife on Niwot Ridge rely on restricted levels of acidity in the soil and water in order to flourish.

“When acidity levels like this increase, what’s worrisome is the potential for irreversible change in vegetation composition,” Neff explains. “And when the plants aren’t as healthy, species will migrate to more habitable land while other invasive species appear. This is directly related to alpine water quality, which has been left unbalanced due to acidic precipitation. It’s not encouraging to see strong acids lowering the pH levels in the water that flows into Boulder. And that’s what was happening in our alpine regions.”

But according to the research, water flowing down to the Front Range is improving, in both its integrity and quantity. This slow but sure reversal in alpine plant and water acidity is encouraging, Neff says, as the mountain lands that surround Boulder are on the track back to a healthy and balanced existence.
However, the research team has also seen a trend of rising ammonium levels in rainfall between 1984 and 2017, with the fertilizer chemical nearly doubling in this area. Neff suggests that continued research on its effects will be crucial moving forward.

While it’s too early to detect any visible changes in the landscape from decreasing acidity, researchers are realizing that an important piece of facilitating the future recovery of these ecosystems is to start monitoring changes as the acidity declines. This fight may be far from over, but as Neff says, it’s important to recognize a win.

“Typically in environmental science, especially right now, we talk about all the irreversible damage occurring and how things are getting worse, but this is a case where we’re actually doing better,” he says. “I think it’s a great lesson. When you identify a problem and put energy and time into doing something about it, you see positive results.”