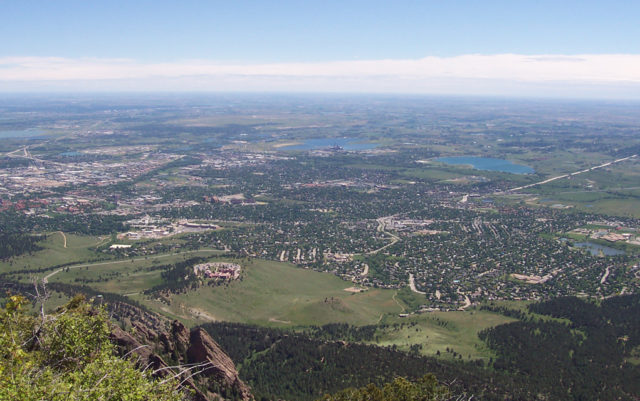 The “greenbelt” of Boulder County has long protected the foothills from urban sprawl and provided a natural open buffer between places like Niwot, Longmont and Boulder. It’s part of the County’s long-standing open space program — which isn’t just recreationally useful and aesthetically pleasing for residents, but also provides environmental benefits like reducing pollution and supporting robust local ecosystems.

But that isn’t all it’s doing.

According to new research from Colorado State University in collaboration with the Barcelona Institute for Global Health, that green and open space is also helping to make residential and urban areas healthier places to live. It’s a discovery that could have a huge impact on how we build cities, and how we deal with some of the unnecessary health risks associated with urban living.

“What we’ve found was that more greenness and vegetation around people’s homes will actually reduce this risk of [premature] mortality,” says Dr. David Rojas-Rueda, an environmental epidemiologist at CSU and lead author of the study “Green spaces and mortality.”

Rojas-Rueda is already working with cities around the world to apply his research to city planning and policy making. His hope is to improve urban health in some of the most high-risk urban communities.

“This is the largest and most comprehensive synthesis to date on green space and premature mortality,” Rojas-Rueda explains. The study, which was funded by the World Health Organization, analyzed evidence from nine related studies, following more than 8 million people for between five and eight years of their lives. The scope of that analysis spanned seven different countries, including the U.S.

For the study, Rojas-Rueda and his team used satellite imagery to measure an area’s exposure to green space (a measurement they dubbed the Normalized Difference Vegetation Index). They then assessed local environmental risk factors, comparing all of that to rates of premature deaths.

“We actually found a trend,” Rojas-Rueda says. And not an insignificant one: For every 0.1% increase in the Normalized Vegetation Index within 1,600 feet of a person’s residence, there is a 4% reduction in premature deaths, according to their findings.

Rojas-Rueda explains that larger buffers between people and greenery still produced benefits to people’s health, according to their research. But the closer the better, he says.

The study looks at all-cause mortality, generally — meaning that the cause of death could be anything. Previous studies show green space in urban and residential areas improves people’s moods and reduces stress, which can lead to longer lives. Rojas-Rueda says that green space regulates noise and also helps improve air quality; it also regulates temperatures, reducing urban heat island effects. Greenery even helps to increase an area’s biodiversity, which Rojas-Rueda suggests can make people’s micro-biomes healthier.

“There are many different pathways that could be producing these benefits for health,” Rojas-Rueda says. “The only thing that we are seeing in this study is the culmination of all those pathways … in this next assessment we want to identify which pathways and factors benefit people the most.”

Their next object of research will hopefully prove even more useful: discovering the specific reasons why green space reduces premature mortality.

By using this study (and the next) to influence policy and city planning, Rojas-Rueda hopes to extend people’s lives and reduce risk factors to health simply by making cities greener.

Rojas-Rueda and his team are working with cities like Philadelphia, Barcelona and Tarkwa, Ghana, to assess their urban space, and draft plans and policy that uses these new findings to reduce health risks. Particularly in low-income or socially disadvantaged communities, mortality is already high, and simple solutions like more greenery could make the biggest impact.

“In many cases in the U.S., the disadvantaged communities have less access to quality greenness, so improving this access, proximity and quality will produce larger benefits in those communities than if we implemented them in more affluent neighborhoods where they might already have greenness.”

That doesn’t have to mean installing big open parks or establishing open space like you find around Boulder County, Rojas-Rueda says. Even small green additions can improve quality and length of life. Rooftop gardens, hanging or vertical gardens on buildings, or even just more trees along streets all show signs of improving health, according to the study.

“We are now taking it to the next level,” Rojas-Rueda says. “Which is evidence-based policy making, helping policy makers understand that green space isn’t just good for sustainability it’s also good for public health.”