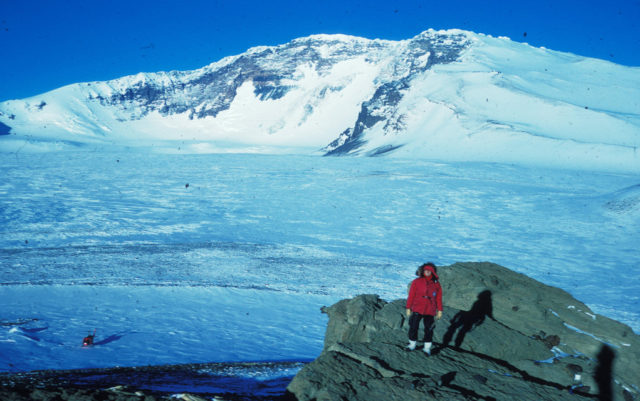 Hundreds of volcanoes could be hiding beneath almost 2,000 meters of solid Antarctic ice, an area twice the size of Texas, according to data collected by a magnetic sensor on an aircraft of Antarctica’s subglacial topography.

If these volcanoes begin to erupt, they could accelerate the human-caused melting of the West Antarctica Ice Sheet (WAIS) that is already worrying scientists. The ice sheet could even melt entirely, raising seal levels up to 3.2 meters, flooding coastal cities around the globe.

WAIS is part of the greater Antarctic ice sheet — the largest single mass of ice on Earth — and one of the planet’s two polar ice caps. Warmer ocean temperatures threaten the entire ice sheet, making it vulnerable to collapse.

John Behrendt, a geophysicist at the Institute of Arctic and Alpine Research at CU-Boulder, hypothesizes as many as 1,000 volcanic centers exist under the WAIS. Behrendt has identified these volcanic “anomalies” given volcanic rock has a strong magnetic attraction. Of the 1,000 or so anomalies, 400 are consistent with the physical form of volcanoes, he says.

Rising ocean temperatures, due to human-induced climate change, is melting the “tongues” of the glaciers that lead from the WAIS into the sea, says Wesley Le Masurier, volcanologist at CU. This is causing those parts of the glaciers to come unglued from the bedrock.

The fear is that if this happens, and if there is actually a group of volcanoes under the WAIS, it would release the pressure of the overlying ice on the volcanoes, raising the risk of eruption and accelerating melting.

Volcanic eruptions in Iceland and elsewhere in Antarctica have already increased due to the melting of the glaciers, according to multiple studies.

But Le Masurier isn’t convinced all of the anomalies Behrendt found indicate the presence of volcanoes.

“There is a pretty good indication that there are some volcanoes down there,” he says. “But what I question is whether there’s as much as Behrendt thinks there are.”

Van Wyk de Vries also believes in the existence of a subglacial volcanic province in the WAIS. The geologist led a study where he identified 130 volcanoes below the ice sheet.

To identify these volcanoes, Van Wyk de Vries looked to see whether he could find signs of volcanic cones in the overlying topography of the ice sheet. He then compared what he found with Behrendt’s magnetic data, and is “almost certain” there are a total of 138 probable volcanoes.

Some scientists doubt these findings. A group led by Stefan Vogel, a scientist at the University of Tasmania, studied samples from under the surface of a glacier recovered from boreholes previously drilled to the base of the WAIS. Of 500 rocks examined, only two were identified as magma erupted from a volcano known as basaltic pebbles.

Le Masurier explains that if there were hundreds of subglacial volcanoes, more basaltic pebbles would have been present in the sediments recovered. Le Masurier says older non-volcanic rocks could give a signal similar to the magnetic anomalies Behrendt found.

But Van Wyk de Vries claims there might be a different explanation. Volcanic rock is more challenging to pull out from drilled boreholes than sediments, sandstones and mudstones. So, the rocks recovered from the WAIS could be loose sediment. Behrendt adds that they did not drill deep enough into the bedrock to get past loose sediment.

Regardless of whether there are 100 or 1,000 subglacial volcanoes under the WAIS, they could still influence the melting of the ice sheet. And ice sheet melting could cause sea levels to rise approximately three meters, which Behrendt says is “terrible news for a lot of cities right on the coast.”