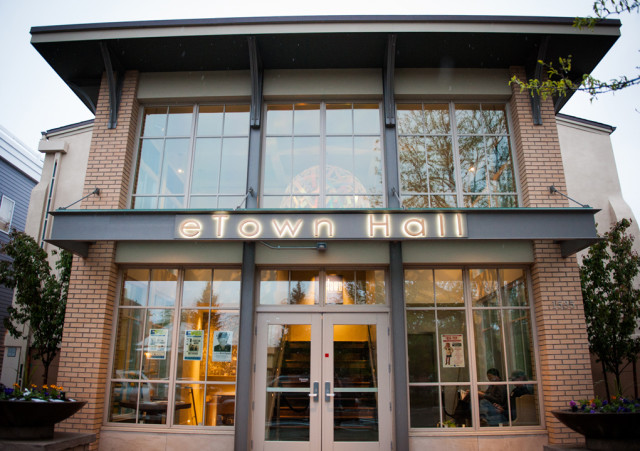 Environmental news is notorious for doomsday messages from climate change, to drought, to mass extinctions, but one Boulder-based radio show has been delivering positive social messages for nearly 25 years.

On eTown, Nick and Helen Forster, founders of the nonprofit, blend music with environmental messages on a show that’s broadcast on more than 300 stations around the world.

“There was a lot of apathy in 1991 and it wasn’t because people are bad or lazy or greedy, people are just people, and people were feeling overwhelmed by what was going on around them and disempowered to do anything,” Helen says. “We wanted to have a show where you could feel safe to come in and listen and hear about these things that at the time weren’t being featured in mainstream media.”

They have hosted artists like James Taylor and Ben Harper along with environmentalists from Al Gore to Jane Goodall. But eTown has a special place for their eChievement award winners — your friendly neighborhood do-gooders who protect the environment, help the homeless, feed the hungry or generally make the world a better place.

“Ultimately, the eChievement is where we get the most impact,” says Abby Wolff, eTown’s director of marketing. “Helen has some really beautiful stories of people who went from a $100,000 budget to a $600,000 annual budget right after the show because people get exposed to those projects, and it really touches a lot of lives.

“They have these great stories, these tear-jerking, adorable stories, and they only get so much time that we can interview them on the stage,” Wolff continues. “We’d like to do more of a behind-the-scenes, following them through their operations … making them their own little videos because that can help promote their cause even better.”

And now that they’re settled into their new home at 1535 Spruce St. in Boulder, eTown is delving into new opportunities such as making educational videos, webinars, podcasts and perchance, a “solo for solar” series shot on the building’s rooftop.

In 2012, the Forsters converted a 1920s church into eTown Hall, a home for the radio show and a gathering place for the community. And they did it in the most Boulder way possible by embracing recycling, composting, renewables and by treating the church like an older sibling, “wearing” all its hand-me-downs whenever possible.

Under the high-ceilings capped with 236 solar panels, light streams through stained glass windows onto rows of wooden pews in front of the stage. Flecks of a three-point line decorate the office floor, relics from the basketball court in the church’s old gym that now serves as eTown’s office and stage.

“There’s a thousand of those details throughout the entire building,” says John “Digger” Peláez, eTown’s director of operations. “I could go on for days about all the different things that are reused and repurposed. … It would have been so easy to scrape this place and do it for two million bucks instead of doing it right and keeping it cool and spending eight million bucks.”

PACE’s Zero Waste certification requires a business to divert 70 percent of waste out of the trash. In the summer of 2015, eTown completed a two-week waste audit, measuring trash output against recycling and compost. eTown received PACE certification for waste diversion by keeping almost 10,000 pounds of waste out of landfills over the course of the year. That’s an equivalent of saving over 1,000 gallons of gasoline.

“We have a giant compost bin and then these teeny garbage cans that barely ever get used,” Wolff says. “If they are [used,] it’s because somebody brought trash in from somewhere else.”

To get the energy certification, buildings typically need a score of 75 out of 100 from EnergyStar Portfolio Manager, which measures building energy performance as compared with similar buildings throughout the nation. Because performance halls are so diverse, EnergyStar doesn’t have a solid baseline of similar buildings to compare eTown to, so PACE resorted to their old method of certification based on the organization’s 22 years of experience.

“When we set up our certification, recognizing that we were going to get a significant number of businesses that we couldn’t get a portfolio manager score for, we said, ‘OK, if they’re not eligible to receive a portfolio manager score, then what we’ll do is go through a checklist of all the things we would expect a highperforming building to be doing,’” says Bill Hayes, business sustainability team lead with PACE.

To certify a business that can’t get a portfolio manager score, five PACE advisors must unanimously agree that the building is up to par. By filling the walls with insulation, installing a high efficiency furnace and air conditioner, and avoiding fossil fuels, eTown surpassed expectations.

“We severed all the gas lines to the building,” Digger says. “With our commitment to renewable electric, solar electric, we believe that that’s the future that we all need to go toward.”

eTown is constantly evolving to better fit its mission “to educate, entertain, and inspire a diverse audience through music and conversation, to create a socially responsible and environmentally sustainable world.”

“As a tour manager, I’ve been to almost every venue in the country, big and small, as well as hundreds overseas,” Digger says. “And I’ve never run into a facility that’s this green.”