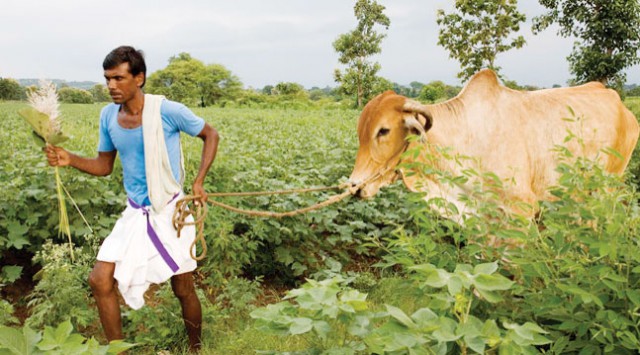 In the fairytale Jack and the Beanstalk, Jack sells everything he owns — one cow — for a handful of magic beans. It works out for Jack. He takes on the Giant, wins, and returns home to a happy mother (though she may not send him to market again responsible for the sale of their only livestock).

The story that unfolds in the documentary Bitter Seeds, featured at the Boulder International Film Festival, is about farmers who wager it all on what are promised to be miracle seeds, but land dust and failed crops rather than a magic bean pole. Their ending is far more grim.

A quarter of a million farmers in India have committed suicide in the last 16 years, according to Bitter Seeds. This equates to one farmer killing himself every 30 minutes, all because the miracle cotton seeds they were sold with the promise they would increase yield drove them into debt and failed to produce an ample return. In this tale, the giant they faced is GMO seed producer Monsanto, and they lost.

Historically, Indian farmers have cultivated their own seeds each year. However, when genetically modified seeds were introduced into the market after the World Trade Organization forced India to open its doors to foreign seed companies, things changed. According to Bitter Seeds, directed by Micha X. Peled, Indian farmers were told that, although the seeds are exorbitantly priced, they would produce double the farmers’ normal yield and resist pests. The farmers were not told that the seeds required large amounts of water rarely found in India.

Farmers sought loans from the bank or, when that option failed, signed over their land for a loan from illegal moneylenders who charge extremely high interest rates. They were left relying heavily on a high yield of crops in order to keep their land, and when the crop failed, as it so often did because of lack of water, the farmers had nothing to keep them going.

The film is included in BIFF’s Call 2 Action program, which aims to bring global issues home with local action points, and will be introduced by Mary VonBreck, the campaign manager of GMO Free Boulder. An informational discussion, hosted by the director and GMO Free Boulder, will be held after the film.

“This is a heartbreaking film,” VonBreck says. “When I saw it, I knew this was such an important issue to raise awareness on. I knew we were doing important work.”

There are three parts to the call to action, VonBreck says. First, the group wants citizens to be very vocal at their grocery stores by asking what foods contain GMOs. The belief is that vocalization of these concerns will lead to the second part, which is labeling foods that contain GMOs.

“The first two come under something consumers can use to take a stand on the human rights issues behind GMOs,” VonBreck says. “I mean, how can you boycott something if it isn’t labeled?” The final part of the call to action is banning GMOs from Boulder.

“Monsanto has already started pulling out of Europe because they have labeling for their GMOs,” VonBreck says. “The labeling makes it so no one buys their products, so there isn’t a market over there. It is time for us to do the same. We have got to push it through.”

Mark Retzloff, co-founder of Alfalfa’s, is joining the call to action with a new program in his store that will identify which products could have GMOs.

“[Labeling] is absolutely the right thing for people to be doing,” Retzloff says. “When you have surveys that show 85 to 90 percent of people want their products labeled, then retailers need to listen. Alfalfa’s wants to see that done.”

“Here is a documentary that shows what is really happening because of GMOs,” VonBreck says. “It is time to make a stand against them.”

Bitter Seeds will be shown at 12:30 p.m. on Friday, Feb. 17 at the Boulder Theater. The informational session will be held after the film in a tent on Pearl Street Mall in front of the County Courthouse.

“Boulder is special because we have a very proactive community, and we don’t want GMOs,” Retzloff says. “What we do is something other people in the country could do. Our actions could set an example for others.”