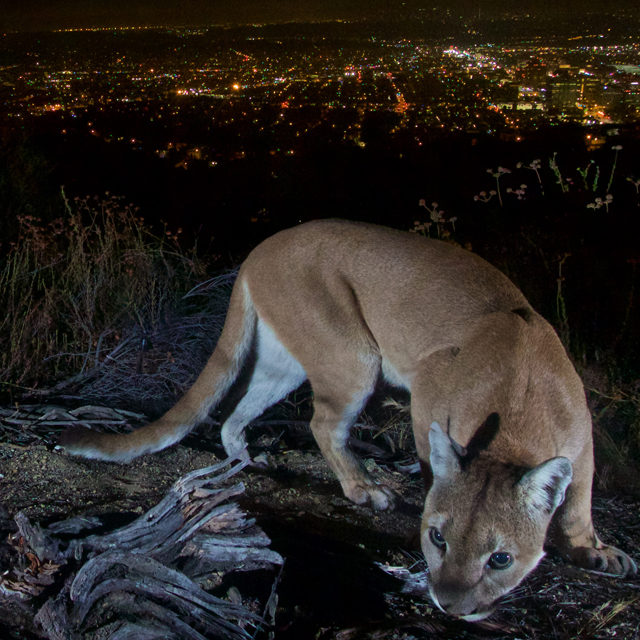 It’s easy to forget that there are mountain lions lurking in Boulder’s backyard, in the hills just beyond the city. That is, until there’s one actually lurking in the backyard. Or even inside of your home…

On Aug. 9, a Boulder resident came home to their Marine Street house to discover that their housecat had been replaced by a slightly larger version — a Puma Concolor, more commonly known as a mountain lion (or a cougar). The beast had slipped inside their home through a screen door, got trapped, devoured their pet, and made itself comfortable in its newly claimed den.

It isn’t uncommon, it’s just part of living in the foothills of the Rocky Mountains. And in fact, this incident actually followed several other sightings of mountain lions in Boulder that had people on edge and the local Parks and Wildlife officers on high-alert.

The thing is, these animals are normally extremely elusive, and many Coloradans go their entire lives without seeing a single mountain lion. So, what is making these solitary, rarely encountered hunters venture into the generally predator-free neighborhoods of Boulder?

That was one of the questions that Mat Alldredge, a researcher with Colorado Parks and Wildlife (CPW), wants to answer. Back in 2006 he began a comprehensive study of mountain lions centered in Boulder that lasted more than a decade.

“We tried to capture as many lions as we could and put GPS collars on them,” he explains. On top of tracking their movements, Alldredge says he and his team did a number of kill-site investigations to look at the animals’ food habits, conducted stable isotope analysis to retrace the cats’ steps, and even tried some adverse conditioning to see if they could change mountain lions’ responses to humans.

“We kind of tried to cover the board,” Alldredge says.

According to Alldredge, they found that the mountain lions who venture into neighborhoods, generally aren’t just innocently lost. They’re looking for food.

“They weren’t really traveling or denning in [neighborhoods], or anything else,” Alldredge says. Rather, it’s likely because residential neighborhoods tend to be a very consistent source of food, he says. It’s like a forbidden garden to these creatures. “There are a lot of deer in Boulder, and there is a lot of other small prey in Boulder, too: cats, dogs or raccoons,” Alldredge says. “You name it, they’ll go after all of them.”

Still, it is a rare occurrence, Alldredge assures. According to the GPS data, the mountain lions tagged and tracked by CPW generally moved in such a way as to avoid residential areas, even though they represent such fruitful hunting grounds.

Obviously though, that is not always the case.

“When you talk to an individual who has had a mountain lion hanging around in their backyard for a few days, it’s really hard to tell that person, ‘Hey, mountain lions generally avoid people, and they’re avoiding people intentionally,’” says Kevin Blecha, a terrestrial biologist with CPW, and the lead author of a new Colorado State University study published in the Journal of Animal Ecology.

Blecha worked with Alldredge on the CPW mountain lion study in Boulder, focusing on the animals’ feeding habits and how that relates to their movements.

Mountain lions typically spend four to five days eating one animal, like a deer, Belcha says, then, they’ll go off hunting for the next meal, whatever or wherever that may be. “And they’ll usually go about one to two days between those time periods,” he says.

But, Blecha explains, when that time between eating events is stretched, the lions start to act a little more boldly. Whether it’s because they can’t find food, or because they’ve just been unsuccessful at hunting, they start to get seriously hungry, and human neighborhoods start to look a little more inviting to the big cats.

“After about three to four days, their fear [of neighborhoods] just kept subsiding,” Blecha says. “And at about seven to 10 days, they essentially don’t appear to care that there are houses in their movement path.”

Which, according to the data, usually happens around late winter and early spring, when wild food sources like deer, elk, rabbits and raccoons start to deplete at the end of the cold season.

Alldredge and Blecha both quickly clarify that this doesn’t mean these apex-predators are more aggressive toward humans when they’re in town, though.

“Really what this falls under is the realm of community ecology,” Blecha says. “Mountain lions, humans and mountain lions’ prey — which maybe are pets or deer or hobby livestock — we’re all entangled in this three-player game, and I don’t think that we’re ever going to be able to disentangle that.”

Human-lion conflict is going to be a fact of life so long as people have homes in mountain lion country, he says.

Alldredge agrees, “As long as we have habitats that attract prey, we’ll probably have lions coming into these areas.”

So, their advice? Lock your doors and windows at night. Bring in the dog or the cat and try to keep any hobby livestock protected from predation. In essence, protect your pets and hope for the best.

Because when big cats come to Boulder, they’re typically hungry and hunting.