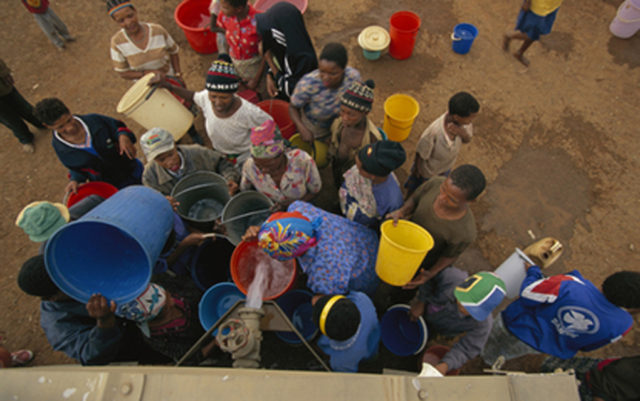 Courtesy of Drop in Sea

When Norman Mthethwa arrives back to his village in South Africa, he’s got a tight schedule and a lot of work to do. After spending the better part of a year developing his organization, Drop in Sea, through Watson Institute’s incubator program at Chautauqua, Mthethwa is champing at the bit to get down to business.

A community of nearly 10,000 people, Mthethwa’s village, Boschfontein, (and all of South Africa, as he points out) is in the midst of a water crisis. It’s estimated 5 million people don’t have access to clean drinking water, while 14 million don’t have access to safe sanitation. Additionally, the country has experienced years of climate change-induced drought causing severe water shortages in major cities like Cape Town. In many rural areas, like Boschfontein, access to fresh drinking water is severely limited, not only because of geography or climate — but also by broken wells and boreholes in disrepair. They know where the water is, they just can’t access it.

“Water is the source of a lot of challenges,” Mthethwa says. “Yes, education is important, but if you’re not healthy, you can’t learn. If you get sick from the water you drink, health, education, innovation, all of those things are affected.”

Mthethwa experienced this water crisis first-hand growing up in Boschfontein.“In my house we only used to get water on the weekends,” Mthethwa describes. “If you didn’t save up water in those two days you were screwed for the whole week. And if you didn’t, that meant you had to go to school, come back, take a jerry can, go find a stream and then carry it back.”

And even then, he says, a lot of the time the water that he would collect was unsanitary and required a lot of boiling.

“I don’t want the next person coming after me to feel that, to experience that,” Mthethwa says. “I want to change it.”

When he was in high school he became involved with Imagine Scholars, an after-school youth development initiative that aims to empower young leaders. They helped Mthethwa get scholarships and attend college at the University of Pretoria, which, he says, was a dream come true.

It was at university that Mthethwa started Drop in Sea as a side project, starting to think about how he could address water scarcity in his village and make an impact on his community.

But it wasn’t until he graduated with his degree in business that Drop in Sea became the forefront of his focus.

He entered Drop in Sea into a pitch competition and earned his first $1,000 in funding. From there he applied to Watson Institute’s incubator program, which aims to help next-generation innovators and social entrepreneurs amplify their impact through social ventures and projects.

It was a long shot, Mthethwa says. For a kid from South Africa, the chances of getting into Watson and the logistics of organizing such a trip if he did, seemed like insurmountable challenges.

“But, I made it happen,” Mthethwa says, surprising even himself. He arrived in Boulder in January 2018, with his budding pet pilot project and an inexhaustible drive to push it forward.

“I gathered a team of other people who have a personal connection to the mission, and also differing experiences and expertise,” Mthethwa explains. He registered Drop in Sea as an NGO in June and started fundraising right away. If they were going to serve everyone in Boschfontein, Mthethwa calculated they were going to need at least $3,000 to do it.

“Some of the money has been coming in on individual donations, like people who really believe in our idea,” Mthethwa says.

But the most significant contribution to their cause came from the Red Empress Foundation, which awarded Drop in Sea $2,967.68 to improve water access in Boschfontein in November.

It was exactly the boost the organization needed.

“When I got the grant I was over the moon,” says Mthethwa. “$3,000 or $4,000 is probably not a lot here in the States, but it will mean a lot to a lot of people in South Africa. There are lives that are going to be changed.”

The holidays marked the end of Mthethwa’s time in Boulder, and the beginning of the real work. Now back in South Africa, he’s working to hire a drilling firm to start working on the wells. At the same time, he’s recruiting people from Boschfontein to act as the project liaisons with the community and who will learn how to repair and maintain the wells. The entire project life-cycle should only take about three weeks, he hopes.

The end goal is autonomy, Mthethwa says. He wants to make sure that the community can support themselves, that they can learn how the pumps work, and then teach that to other people and continue to enjoy fresh, clean water. And he isn’t stopping with Boschfontein. When Mthethwa is finished with Drop in Sea’s work there, he’ll move onto the next community, and the next one after that.

“Water is a world crisis, it’s not just South Africa or my community or anywhere else,” he says. It’s something we can all relate to and something everyone on Earth should care about. “Water is life.”