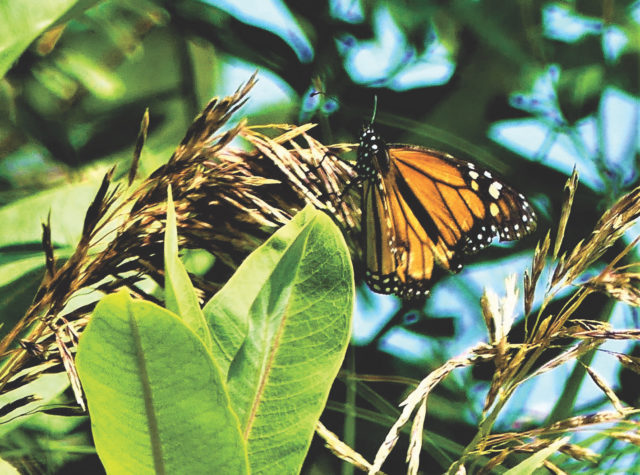 The year Abraham Lincoln was elected president, cabbage white butterflies arrived in Quebec, Canada, carried over via European ships across the Atlantic. You can tell the sex of the small, flittering creature by the number of dots on its papery-thin white wings: two black eyes highlight each of the females’ wings, only one on the males.

Upon their arrival in North America, these Pieris rapae butterflies dispersed and used, as they always do, UV guides in their search for nectar. Certain petals reflect UV light, attracting and enticing the butterfly to snuggle up and feed off its nectar, collecting and spreading its pollen along the way. Cabbage white butterflies love purple, blue and yellow hues, and therefore tend to seek out cabbage, hence their name and status as a serious pest among many agricultural communities. They’re part of the Pieridae butterfly family, a collection of mostly white and orange butterflies speckled with characteristic black dots that now fly all over the Northern hemisphere.

In 2021, 585 Pieridae butterflies were recorded in Boulder County, according to data collected by the Colorado Butterfly Monitoring Network (CBMN), one of the many research and community science projects orchestrated by Butterfly Pavilion, a world-class invertebrate zoo-slash-international-research-hub located in Westminster. At the end of March, Butterfly Pavilion called out the cabbage white as its “most wanted” butterfly for the spring season, urging Coloradans to join in a statewide “scavenger hunt” via Instagram. “By helping Butterfly Pavilion scientists record the first butterflies of the season, participants expand our understanding of how butterfly populations are changing year after year in face of changing climate conditions,” the scavenger organizers wrote.

Calling in everyday folks to help identify cabbage whites is but one of the many ways Butterfly Pavilion is updating our modern perception of science, as it’s been doing for nearly a decade via CBMN and other programs like the Colorado Dragonfly Monitoring Project and the Urban Prairies Project, all of which rely on trained volunteers from around the state to help with data collection.

“A lot of times, when people think about science, they tend to think about traditionally trained academics and white lab coats, right?” says Ashley White, manager of community habitats at Butterfly Pavilion. And while the work and perspectives of those types of scientists are valuable, “so are the perspectives of the wide variety of people that represent our communities here in Colorado.”

Seeking to expand its roster of community scientists and honor CBMN’s 10th year of data collection, Butterfly Pavilion is hosting its 2022 monitor training sessions virtually, 10 a.m. to 12 p.m., Sunday, April 10 or Monday, April 11 (interested folks can also request a recording of the trainings to watch at a later date). The training covers how to be a successful butterfly monitor: recording the flying creatures out in the field, then submitting observations to Butterfly Pavilion scientists. Each participant is assigned a site to monitor 6 to 8 times between May and September, and is expected to conduct a 1-2 hour survey during each site visit.

“There’s so many people with unique knowledge and experience—community science really creates a way for those really valuable perspectives to enter a conversation [both] local and global [about] decision-making for conservation,” White says.

When Butterfly Pavilion opened in 1995, the 30,000-square-foot facility became the world’s first stand-alone invertebrate zoo; currently, a new, 81,000-square-foot facility is in the works and will open in Broomfield in 2025, expanding the zoo and adding more world-class education and research labs, as Butterfly Pavilion conducts research and upstarts conservation programs all around the globe—projects in places like Tanzania, Mongolia, Saudi Arabia and Sumatra, where they’re building a butterfly farm, contribute to Butterfly Pavilion’s mission to transform the way the world thinks about invertebrates.

Data collected by CBMN community scientists in Boulder County and elsewhere across the state has been distributed to land managers for use when making conservation decisions. Invertebrates (spineless creatures that include butterflies, dragonflies, beetles, worms, snails, mosquitoes, etc.) provide a wide range of important ecological services: organic matter recycling, soil creation, pollination, exerting natural biological controls, providing the base of food webs, and much more. According to Butterfly Pavilion communications director Jennifer Quermann: “The loss of biodiversity would have unimaginable impacts and lead to the collapse of the ecological systems upon which humanity and most other life depend.”

Since its inception in 2013, Colorado Butterfly Monitoring Network has recorded 107,811 individual butterflies, accounting for 3,795 hours of volunteer monitoring over the last nine years. In 2021, butterflies were monitored in 12 counties; serving as both pollinators and food for other animals, butterflies often act as indicator species— knowing which butterflies are active across different parts of Colorado imparts information about the health of local ecosystems. “If we have an inadequate population of a number of these invertebrate species, then we can really see ecosystems collapse,” says White, who leads the Urban Prairies Project, which trains everyday people as “restoration masters” and will begin data collection across open space prairie sites in June. “When we have healthy open spaces, we have healthy habitats for these invertebrates. And we ultimately end up with healthy habitats for our human population.”

Butterfly Pavilion will also teach people how to create quality habitats in their yards and/or neighborhoods this summer. The idea, White explains, is to create corridors throughout populated areas like Boulder County, “where healthy open spaces are connected to healthy neighborhoods, and ultimately providing that great habitat for invertebrates and all kinds of wildlife.”

Ultimately, getting everyday folks intimately involved in science really “benefits the community scientist and the community,” she says. “We’re getting a lot of great data—but the person engaging in the practice and the collection of the data gets to be immersed in the outdoors, and they get to be connected to wildlife and to these spaces, too.”

Which is a powerful way to enact change: research shows directly involving people in problem-solving keeps them engaged, focused, and motivated in pursuit of solutions. As the Stanford University social psychologist Albert Bandura wrote, “If people believe they have no power to produce results, they will not attempt to make things happen.”

After getting up close and personal with invertebrates, you’ll find “they’re actually pretty cute,” Quermann says. “[People then] understand [invertebrates] are not such foreign concepts or animals, and then people are more likely to protect them.”

ON THE BILL: Butterfly Pavilion virtual volunteer trainings, 10 a.m.-12 p.m. April 10 or 11. Free. Sign up to attend (or request a recorded copy): https://butterflies.org/community-science/