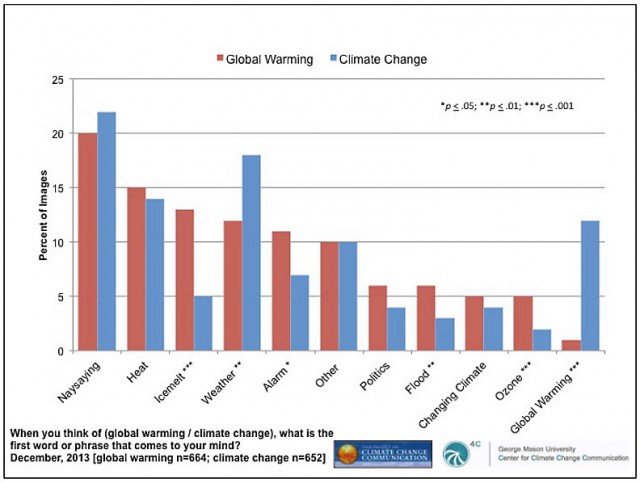 “Americans interpret and respond to these words differently,” said Anthony Leiserowitz, the director of the Yale study, which found 13 percent more Americans saw “global warming” as a bad thing and that 9 percent more people think that “global warming,” compared to “climate change,” will harm their family.

“‘Climate change’ is more about long-term variation in Earth’s climate,” said Ashley Anderson, a lead investigator on the research and assistant professor in journalism and technical communication at Colorado State University.

The term “climate change” was coined in 1956 by Gilbert Plass, who was among the first scientists to calculate the role of carbon dioxide in warming the planet. “Global warming” did not appear until 1975, and was first used by author Wallace Broecker.

“‘Global warming’ is really about the increase in Earth’s temperature, primari ly due to greenhouse gas emissions,” Anderson said.

Everyone from politicians to journalists use these words and have a potential to change the public’s view on this issue.

“The two names have different connotations to many people in the public — they aren’t necessarily seen as synonymous,” Edward Maibach, a lead investigator on the research and professor at George Mason University, said in an email.

“If we focus on what we are calling it by sacrificing moving forward on it … it’s a mistake,” said Maxwell Boykoff, an assistant professor in the Center for Science and Technology Policy at the University of Colorado Boulder.

The public’s varying reaction to the two terms is nothing new in the political sphere. In 2002, Frank Luntz, a Republican pollster and strategist, told the George W. Bush administration in a secret memo, made public by the Environmental Working Group, to use the term “climate change,” as “‘climate change’ is less frightening than ‘global warming.’”

The Yale study found that if politicians are looking to increase concern, alarm or activism, they should use “global warming,” Anderson said, but, if they are looking to increase awareness and reach to those not aware of the issues, they should use “climate change.” Word choice should take into account, he says, “What is the goal and where do we want to move people?”

“We don’t see these findings as having dramatic implications for communicators, but there are subtle implications,” Maibach said.

“I think journalists can do a better job clearing that up,” said Tom Yulsman, director of the Center for Environmental Journalism, and a professor at the University of Colorado Boulder.

A journalist’s job is to make sure the public understands things, says Yulsman. “My worry would be that a journalist uses different words based on political implications,” he adds.

Yulsman says he thinks that one way to help this confusion is for newsrooms to have guidelines on how to use the two terms and stick to them.