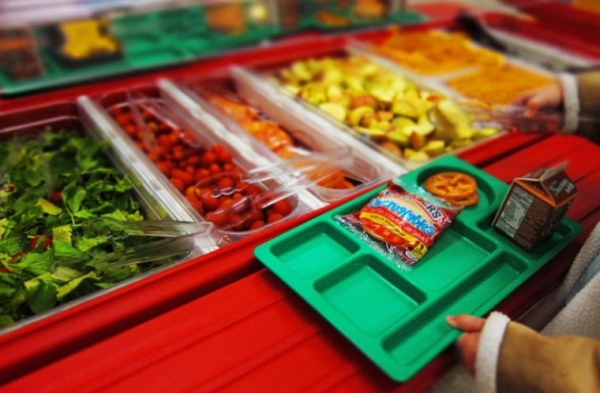 Trayless dining in university dining halls: a simple idea, but one with few case studies and fewer reliable metrics.

“It’s supposed to save water and save energy, and people also take less food when they don’t have a tray, because they can’t stack it up as much. So you don’t have as much food waste,” says Courtlyn Carpenter, a sophomore who researched trayless dining during her freshman year at the University of Colorado Boulder.

All of CU’s dining halls currently offer trays. Carpenter says the only way to know if trayless dining would successfully improve the school’s sustainability record is if the school just gives it a try.

The University of Colorado Boulder opened its LEEDS-platinumstatus residence hall, Williams Village North, in 2011. The dorm is home to two academic programs that focus students on sustainability issues. One program, the Sustainability & Social Innovation Residential Academic Program, or SSI RAP, helped Carpenter get her trayless dining initiative off the ground.

“We were trying to get [trayless dining] implemented in some of the dining halls at CU, and [dining services] had approved the program,” Carpenter says.

But then her project hit a roadblock. Carpenter didn’t have enough beneficial evidence to support the school moving forward with trayless dining, and the project was halted by the administration.

“The most significant barrier is the layout of our dining centers, which makes it difficult to implement,” says Amy Beckstrom, director of auxiliary and dining services at CU. “Trayless dining can work in smaller operations, but in larger dining centers like we have, trayless dining can be messy, inconvenient and recent research has shown that it might even promote poor nutrition.”

Some universities report that students are more likely to choose an entrée and a dessert, and skip a salad or healthy side option if they don’t have enough hands to carry another item. Others say that with less room, diners are forced to consciously choose when and why to get back in line for another serving. That’s why Carpenter supports a test program at CU.

“It’s really, really hard to tell, from university to university, if [trayless dining] is going to be successful or not,” Carpenter says.

CU holds a “Scrape Your Plate Day” at least once every semester in all of the campus dining halls, where diners are asked to scrape their unwanted leftovers into special bins for weighing. This project was initiated in 2008, and the fall 2014 Scrape Your Plate Day showed that CU Boulder diners each produced about 3.8 ounces of food waste each meal, on average. Beckstrom says that this number is a 32 percent decrease from six years ago, and that the perdiner waste is comparable to other universities that have trayless dining.

Carpenter found that Colorado State University adopted trayless dining in 2008, and in 2014 reported that it had reduced food waste by 40 percent — to about 2 ounces per diner, per meal.

Both schools’ improvements are impressive, given how much food is thrown away in the U.S. Americans waste 40 percent of their food every year, according to a 2012 report from the Natural Resources Defense Council. Nearly half of that comes from households and service operations, including dining halls and cafeterias.

Carpenter surveyed universities across the U.S. on dining practices and found that 22 out of 25 saw a decrease in food waste when trayless dining was adopted. But most did not have proof of the decreases, and each university had different methods for collecting the information.

“At some universities, students seem to take to it more,” Carpenter says. “But it also depends when you start it, how much food waste you had previously, how your cafeteria is set up for the traffic flow, if students like the food or not. There are a lot of factors. So I think the best way to test it is to actually try it for a semester.”

And things are looking positive for Carpenter’s research.

“I am now working for dining services, I’m their sustainability intern,” Carpenter says. “So they’re having me work on trayless dining again. It’s still a possibility, and I’m hopeful that maybe we can get somewhere this time.”

Beckstrom says that the school is considering trayless dining in Libby Dining Hall, located in the same building as a residence hall and laundry rooms in the center of campus.

“This location may be able to support trayless dining with its existing layout,” Beckstrom says. “It’s not as large as other dining operations. I’m not sure if we will be able to measure our energy and/or water usage, as this data is not separated from the rest of the building.”

Beckstrom says that dining services may consider asking students what their goals are if the program moves forward, whether that be food waste, convenience, portion size options, nutrition, cleanliness, energy use or water use.

“I’d like to pose that question to our students to see what they would consider priorities,” Beckstrom says. “I’m certain that food waste would likely be a leader in the response, as this is an issue that we receive consistent feedback from our guests, our students.”