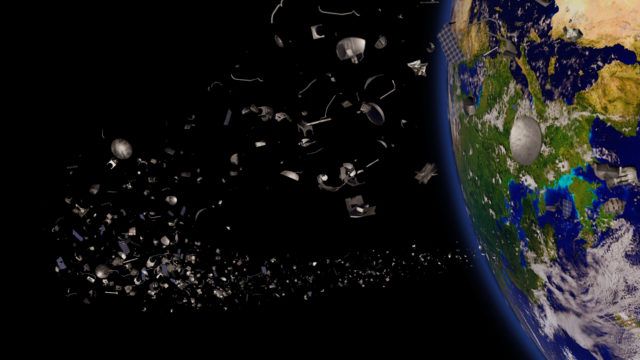 At any given point in time there are hundreds of thousands of particles of debris — approximately 6,000 tons — circulating the planet in low-Earth orbit. In what NASA calls “the world’s largest garbage dump,” objects like old satellites and rocket bodies, as well as small items like nuts and bolts, tools astronauts lose on space walks and even paint flecks orbit the Earth at speeds up to 18,000 miles per hour, or seven times faster than a bullet.

“Something going that fast, even if it’s the size of a paint fleck, if it hits an active satellite it can do a lot of damage,” says Akhil Rao, co-author of a new paper out of CU-Boulder that proposes an orbital-use tax as a way to mitigate the space junk problem. “And that damage to those satellites can create more pieces of debris that are also moving very, very fast. That can cause a lot more damage and you get this dynamic where collisions beget collisions because they create fragments that cause more collisions and on and on and on.”

Space debris has long been a problem (NASA developed its Orbital Debris Program in 1979) but it’s of growing concern as the commercial space industry rapidly expands. Sending more material into space presents a potential tragedy of the commons scenario, an economic situation wherein individual consumers in a shared-resource industry act in their own self-interest without regard for the common good, which ultimately leads to overconsumption and depletion of a resource.

For other natural resources, this often means a decline in supply, like overfishing or deforestation from logging and come with significant environmental impacts. But for space it means more debris in orbit causing potentially dangerous and even life-threatening collisions.

There have been few notable collisions between spacecraft and space junk (with the exception of a 2009 crash between an active U.S. communications satellite and a derelict Russian one.) But the idea behind the researcher’s paper, published May 26 in Proceedings of the National Academy of Sciences, is to create incentives that prevent overcrowding of space instead of waiting to address the problem retroactively.

“We have this chance to get out ahead, which in the different areas of environmental economics where we study this kind of problem, is a pretty rare thing. Usually you’re coming in and cleaning up,” says Matthew Burgess, another author of the study and an assistant professor in environmental studies and an affiliated faculty member in economics at CU. “The proposal is to put it in a tax as soon as possible to address that so that when the industry grows, it grows in a way that prioritizes sustainability from the get-go.”

Similar to a carbon tax, the researchers propose an annual fee that would increase incrementally (about 14% each year), which should only allow satellites to be in space, “if their value justifies their collision risk,” Burgess says.

“You’re going to stop as soon as the industry gets so big that more satellites aren’t generating more value than the risk that they impose.”

The researchers say such a tax could be fostered by an international body like the United Nations Committee on the Peaceful Uses of Outer Space or the Inter-Agency Space Debris Coordination Committee, or it could be developed through an industry consortium like the Satellite Industry Association. It doesn’t really matter who takes charge, as long as countries agree to charge the same tax. And they can administer it separately, using the funds for whatever they see fit.

Such a fee would quadruple the value of the satellite industry — from $600 billion, if things remained the same, to around $3 trillion — by 2040, a key point the researchers highlight.

“Ultimately you need people [in the industry] to come to the table recognizing that this would be in their best interest,” Rao says.

The alternative is cleaning up the space junk, which comes with its own set of costs and technological challenges. And while cleaning up current orbital debris will help, it still doesn’t solve the problem of overlaunching, something that the orbital-use fees could do, the researchers say.

If nothing is done, eventually space debris will fall back down to Earth on its own. But, depending on where in space its orbiting, this could take anywhere from a few months to centuries, posing a risk for future rocket launches and space use.