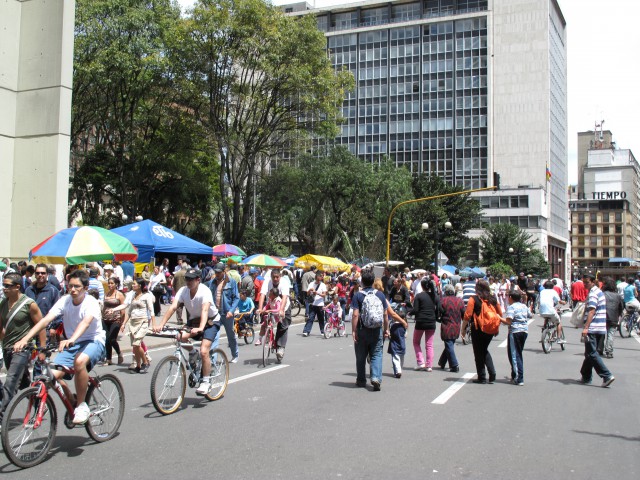 There will be many reasons to celebrate life at Boulder’s newest neighborhood event this Sunday, starting with a parade honoring firefighters.

From 8 a.m. to 4 p.m., Boulder Green Streets takes over Pearl Street between 15th and Folsom to echo a joyous community event that shuts down major roadways in many cities in the United States, as well as in Canada, Mexico and farther abroad.

Called “Ciclovia” (“bike way”) in Bogota, Columbia, where it originated, and known by many names elsewhere, the event aims to re-introduce residents to the pleasure of car-free streets.

A samba-style parade/march will begin at 2 p.m. at 15th Street, with everyone invited to join as a show of support for firefighters battling the Fourmile fire. There will also be a drop-off site for donations benefiting victims of the wildfire and evacuations.The City of Boulder is a key event sponsor, but the initiative comes from resident Hillary Griffith and a slew of volunteers.

The owner of Walkabout Studio, a Boulder video production/photography business, Griffith says she was fascinated by the creative mayors of Bogota — Antanas Mockus and successor Enrique Penalosa — who came up with the Ciclovia and other greenminded, often humorous ways to govern and foster community.

“I thought, ‘Wouldn’t it be wonderful to be able to fly to Columbia, sit down and have a cup of coffee with these guys?’” says Griffith, who has worked “on the sidelines” of nonprofit organizations.

Her dream got better when she discovered that Penalosa was coming to speak in Boulder during an April 2009 U.S. tour.

“I wrote everybody in city administration I could to tell them about what he had done,” she says. “When he came to speak at the Boulder Public Library, there were a lot of city staff members there, a lot of us standing around him when he was done speaking. I brought it up that we should agree right there to start a Ciclovia in Boulder. And we did!” Between city staff and citizen other volunteers, the event became Boulder Green Streets — a day that will begin with a free breakfast for kids (including gluten-free pan cakes), free coffee for grownups and other goodies.

Inserted in this issue of Boulder Weekly is a “passport” that can be used to record event participation in various activities. Passports will be used in drawings for prizes such as gym memberships and an electric bicycle.

It’s all about fresh thinking for a better community.

“Innovation is not always about something like industrial design,” says Griffith. “It’s about politics and ideas, new ways to look at our public spaces and, in Boulder, access to the amazing resource we have of so many creative people.”