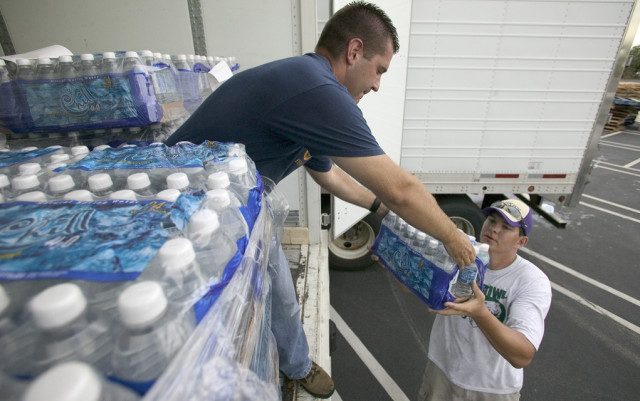 President Obama declared a state of emergency last week in response to the ongoing water crisis in Flint, Michigan, where residents have been drinking city water contaminated with high levels of lead for more than a year. The declaration mobilizes the Federal Emergency Management Administration (FEMA) to provide filters, test kits, bottled water and other supplies.

This $5 million federal aid package is the latest development in the Flint saga, which began in April 2014. In an effort to save money during the construction of a new pipeline, officials in Flint, a city of about 100,000 people, abandoned water previously bought from Detroit, which draws water from Lake Huron. Instead, they began to draw water from the Flint River. Soon after, residents “complained about rashes and strange odors from the river water, but city and state officials mostly insisted that it was safe to drink,” according to The New York Times.

Despite more than a year of complaints from residents, city and state governments only began to address the issue in September 2015. That’s when a group of doctors found extraordinarily high levels of lead in the blood of many children in Flint. Lead is a powerful neurotoxin that can cause developmental issues and other health problems, especially in children, according to the Centers for Disease Control and Prevention. Lead often finds its way into water supplies from old lead pipes which have corroded. When Flint switched its water supply to the Flint River, the more corrosive river water began to strip lead from aging pipes, contaminating residents’ tap water.

Michigan Gov. Rick Snyder, criticized for his administration’s handling of the crisis, requested the declaration from President Obama nine days after declaring a state of emergency himself. In Gov. Snyder’s request to the president, obtained by The Detroit News, he estimated the cost of replacing Flint’s water infrastructure at $767 million.

Researchers from the University of Colorado have found evidence that raises concerns about the longevity of sources of fresh water throughout the state, particularly glaciers.

The scientists utilized radar and seismometers to measure ice sizes and thicknesses throughout the Rocky Mountains. They also calculated air temperatures and other climate factors to predict the rate of recession of glaciers and other ice sources. The research, published Jan. 12 in a special issue of the journal Plant Ecology and Diversity, shows depletion of critical sources of fresh water in Colorado, and projects the complete disappearance of the 1,000-year-old Arikaree Glacier on Niwot Ridge in 25 years. The glacier is nearly 1,000 years old.

Melting ice in Colorado is consistent with a global trend of vanishing frozen water reserves. Ice provides water to the more than 4 million people who live along the Front Range. Boulder and Denver rely on water from the Niwot Ridge area and other sources.

“We are taking the capital out of our hydrological bank account and melting that stored ice,” lead author and CU hydrologist Mark Williams said in a press release. “While some may think this late summer water discharge is the new normal, it is really a limited resource that will eventually disappear.”