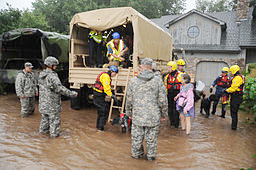 A FLOOD OF ESSAYS TO BENEFIT THE LYON’S HISTORICAL SOCIETY

The Lyon’s Historical Society is partnering with former University of Colorado Boulder instructor Dr. Kayann Short to host a day of writing about last September’s flood. The purpose of the effort is to create personal stories about the devastating 2013 flood that can be added to the Historical Society’s flood project.

As all of us along the Front Range can recall, monsoon rains washed over our region last September hitting Boulder County with five days of rainfall that set a new annual precipitation record, according to the Colorado Climate Center. As a consequence, serious flooding occurred, leaving thousands of people displaced, hundreds of homes destroyed and eight people dead, according to a FEMA disaster report. While memories of these tragic events may be all too fresh at this point, that will not always be the case. Hence the reason that the Historical Society wants to get those memories in writing now so they can be preserved for future generations.

Short, a Lyon’s flood victim herself as well as a former CU Boulder literature and women’s studies instructor of 25 years, will be using her own published essay on the flood as a tool to show others how to write down their experiences.

The workshop will take place Sunday, July 13, 2-4:30 p.m. at Stonebridge Farm, 5169 Ute Highway in Longmont. Donations will be accepted and will benefit the Lyons Historical Society.