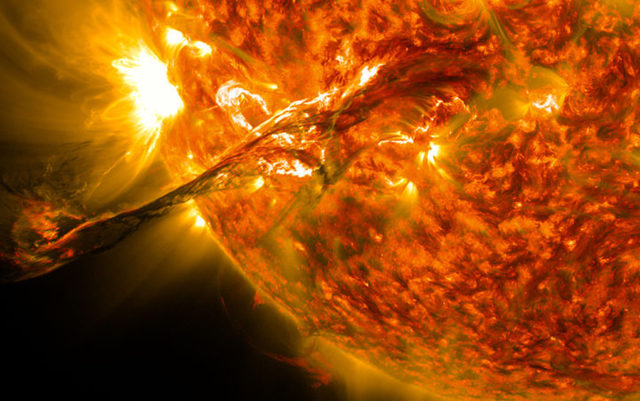 The Southwest Research Institute (SwRI) tested its Solar Instrument Pointing Platform (SSIPP) on Aug. 29, in San Antonio, Texas. The SSIPP is a complete, precise and powerful solar observatory that operates in a near-space environment, around 20 miles above the surface of the Earth, free from distortions that could be caused by Earth’s atmosphere.

Using an optical table that has instruments to collect infrared, ultraviolet and visible light to create a “solar ultrasound,” the SSIPP takes images of the sun’s atmosphere to understand the properties that accompany the eruption of convection cells on its surface. The SSIPP has optical precision akin to imaging a dime from 1 mile away.

The SSIPP is relatively inexpensive at $1 million, costing 10 times less to create than similar observatories made for balloon travel. And it’s relatively small and lightweight, weighing only 160 pounds. It is also reusable, making it a possible blueprint for the development of more low-cost research equipment designed to go to the edge of space.

Originally intended to be on rockets going into space, the SSIPP has been re-purposed for balloon flight. NASA’s Flight Opportunities Program funded the World View stratospheric balloon that the SSIPP will be riding to the edge of the Earth’s atmosphere.

More than a year after the Gold King Mine spill near Silverton, Colorado, the Environmental Protection Agency (EPA) has added the area to the Superfund program’s National Priorities List, joining over 1,300 other sites.

The Superfund program has been in place since 1980 to clean contaminated land and to respond to environmental emergencies, and sites get added to the National Priorities List when they threaten public health or the environment.

On Aug. 5, 2015 millions of gallons of yellow-orange waste water containing arsenic, lead and other heavy metals came rushing out of the Gold King Mine, in the Bonita Peak Mining District, and into the Animas River. Holding around 880,000 pounds of metal, the spill affected drinking water in Colorado, Utah and New Mexico.

At the time, the area was already under investigation by the EPA. The spill was caused by an EPA mining and safety team sent to pump out contaminated water, which had already been leaking into nearby Cement Creek.

The spill has already cost the EPA more than $29 million in water quality testing and response to the disaster, with millions more estimated to be spent, and the cleanup of the Animas River could take years, or decades to fully complete.