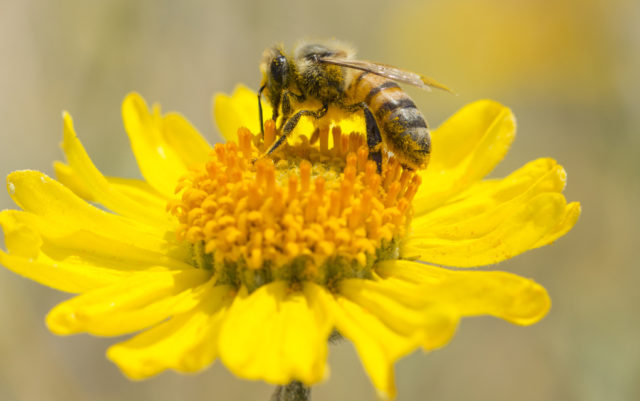 Researchers from the Hebrew University of Jerusalem looked into the effect temperature has on floral smells, a method flowers use to attract pollinators. Their report, published in Plant, Cell & Environment, found there is a “negative effect of heat on floral scent production,” and it interferes with the pollination process.

When plants are ready to reproduce they release distinct smells made up of phenylpropanoid compounds to attract insects like bees, beetles and butterflies. But high temperatures evaporate the scent in the atmosphere so the insects can’t find the nectar or pollinate the plants.

Pollination accounts for more than 90 percent of plant sexual reproduction and 35 percent of crop production worldwide. Less of this natural fertilization means less seeds, which means less crops, which affects all the organisms down the food chain that rely on them.

Also noted in the study is that changes in sunlight are speeding up flowering times, meaning the pollinates and pollinators are getting out of sync. This has similar consequences of declining fertilization, because by the time insects are ready, it’s too late for the plant’s pollen.

The globe has been steadily warming for over a century with no sign of stopping. NASA reports that nine of the 10 hottest years ever recorded have taken place since 2000.

A 10-year study conducted by the University of Washington, and funded by the Environmental Protection Agency and the National Heart, Lung and Blood Institute, has found that long-term exposure to air pollution leads to a higher risk of heart disease, among other health concerns.

Scientists measured nitrogen and carbon levels from 1,500 areas in six states, and then compared the data with results of local residents’ CT scans taken over a period of 12 years.

Researchers found that people who live in areas with higher air pollution had calcium buildup and hardened arteries, something that can lead to heart attack or stroke. People from big metropolitan areas with lots of traffic, and therefore smog, showed up to a 20 percent faster rate of weakened hearts. The study does not explain the biological process that results in the calcium buildup after years of breathing in pollutants.

Each year, the American Lung Association puts out a State of the Air report and ranks atmospheric quality in cities across the nation. In 2015, their list of the 25 most particle-polluted cities included seven California cities at the top and many areas in Ohio and Pennsylvania. Fort Collins and Colorado Springs made the “cleanest cities” list.

Air pollution has also been linked to asthma and arrhythmias and can exasperate issues from preexisting conditions like lung cancer and emphysema, according to a statement from the American Heart Association. The main source of air pollutions is particulate matter including vehicle emissions, road dust, agriculture debris and fires.