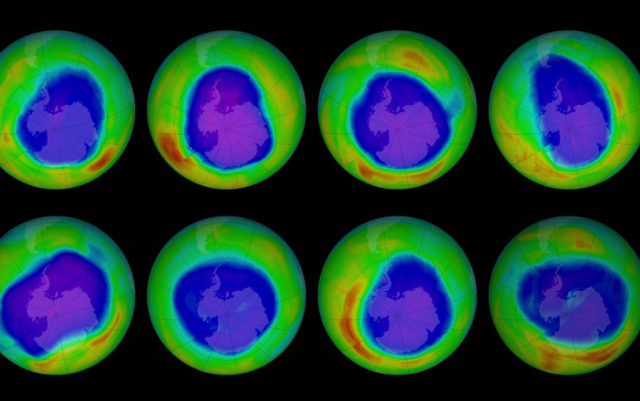 New research shows that the ozone hole above Antarctica is shrinking. The study, led by Massachusetts Institute of Technology chemist Susan Solomon and conducted by experts from the University of Leeds and the National Center of Atmospheric Research, was published in the journal Science last month.

The hole appears annually between August and October, forming when colder temperatures create a reaction in the stratosphere and ozone concentration dips. Researchers measuring ozone levels with weather balloons over the last 15 years noticed the hole is opening slower, later and smaller. They also believe it has shrunk in size by more than 1.5 million square miles.

“It gives us hope that we shouldn’t be afraid to tackle large environmental problems,” Solomon told National Geographic.

In the 1980s, telescopic observation led to the discovery of the Antarctic ozone depletion area, which sent the scientific community into a frenzy trying to figure out what was causing the damage and how to stop it. It has generally been attributed to the release of chlorofluorocarbons and other pollutants released into the atmosphere. A series of international climate agreements banned chlorofluorocarbons, namely the 1987 Montreal Protocol.

While the new research proves to some degree the effectiveness of international climate treaties, it’s estimated that it will be another 40 to 50 years before the ozone hole vanishes completely.

Six years after more than 25,000 barrels of oil spilled from two different pipelines in the Midwest, Enbridge Energy Limited Partnership reached a settlement with the Environmental Protection Agency (EPA) and Department of Justice (DOJ), agreeing to pay a total of $177 million for cleanup costs and mandatory improvement measures. In July 2010, control room settings alerted Enbridge multiple times that there were pipe issues on the 6B line in Marshall, Michigan, but they were ignored and the pipeline ruptured. Regardless, the company restarted the pipeline the next day as oil leaked into the Kalamazoo River for 35 miles into Lake Michigan. Then two months later in Romeoville, Illinois, another pipe broke and spilled into a retention pond for the Des Plaines River. The two incidents cost the energy company $62 million in Clean Water Act fines, $5.4 in reimbursements to the federal government for clean up, which took three years, and a pledge of $110 million for upgraded machinery and operations. The settlement requires Enbridge to replace almost 300 miles of their Great Lake-area pipelines, improve inspection and emergency response procedures and conduct independent third-party audits.

“This agreement puts in place advanced leak detection and monitoring requirements to make sure a disaster like this one doesn’t happen again,” said Cynthia Giles, assistant administrator for EPA’s Office of Enforcement and Compliance Assuranc, in a press release.