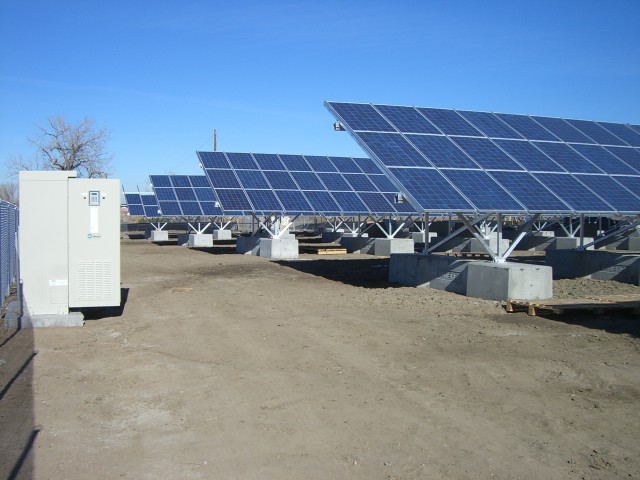 Photo courtesy of the city of Lafayette

Energy bills are no small matter for families with low income. According to a study by the American Coalition for Clean Coal Electricity, these families have gone from spending 12 percent of their after-tax income on energy costs in 2001 to 21 percent in 2012. This amounts to more than $4,500 spent each year on energy alone.

In an effort to help cut costs for low-income households, the city of Lafayette has partnered with Xcel Energy to construct two solar gardens that will generate a total of 1 megawatt of electricity. In addition to reducing the city’s energy use and offsetting 1,034 metric tons of carbon dioxide, the discounted electricity output from the solar gardens will be offered to 25 eligible low-income households in Lafayette, according to a press release from the city. The service will be provided free of charge to the first 25 applicants who qualify.

This is one of many energy improvements for the city in the past few years. Lafayette was the first in Colorado to complete a comprehensive energy audit of all municipal facilities in collaboration with the governor’s office. The introduction of Lafayette’s comprehensive energy plan states its purpose for the future is “to assure adequate lands for various land use requirements, adequate levels of public service and that hazard areas and significant resources are protected.” The project has produced $1.2 million in energy improvements which has so far resulted in 25 percent yearly energy cost savings to the city and reduced carbon dioxide emissions by 966 tons, according to the city of Lafayette’s press release.

The solar energy program strives to help save low-income families up to 50 percent on energy costs with no service or application fees. The deadline to apply is Sept. 30. To apply or for more details, visit www.cityoflafayette.com.

COLORADO RANKS AS ONE OF THE HOTTEST IN THE NATION

And no, we aren’t talking about how awesome it is. More than 1,200 high temperature records have been broken this year in Colorado, making it ninth overall in the nation for record-breaking heat. The ranking is based on the number of records set per state compared to the number expected and the ratio of high to low temperature records set this year. The state of Colorado experienced 22 times more record highs than record lows so far this year.

Other states with the most record-breaking temperatures overall include Wisconsin, Iowa, Missouri, Indiana, Minnesota, North Dakota, Illinois, Ohio and Arkansas.

To view an interactive map of temperature rankings in all states, visit devsite.climatecentral.org/records/rate.