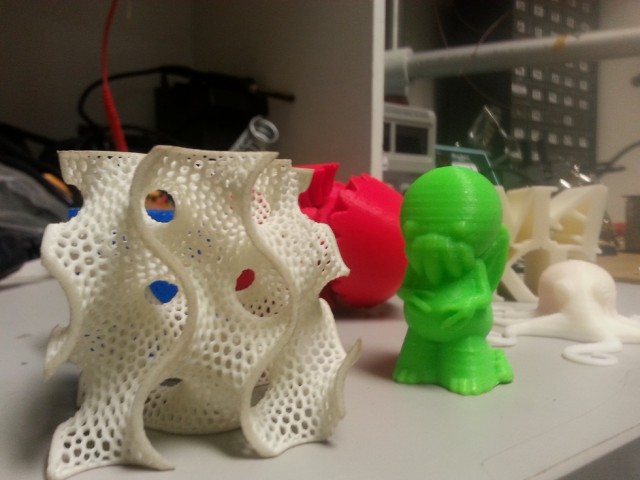 Three-D printing is the new industrial revolution. Ty Syt, a member of the Boulder hackerspace Solid State Depot, says interest in 3-D printing will only continue to grow as more people learn to use the technology. But, it’s a wasteful process, he says, and there’s not really a good way to recycle or reuse the materials, which vary in type, processing requirements and options for disposal.

The filament, or plastic string that is fed through an extruder to print things three-dimensionally, is usually just that: plastic — although some printers can use metal as a printing material. Most printed items around the Depot are plastic trinkets that can fit in one’s palm.

Another sustainability problem with 3-D printing, Syt says, is that components of a printer are often made in China and have the same carbon footprint of any item manufactured there and shipped across the world.

But the fast, inexpensive 3-D printing process is attractive to innovators and local businesses, and the technology has made big improvements in the past few years.

“If you’re making one to 10 of something, 3-D printing is almost certainly one of the fastest and cheapest ways to make it,” says Rob Bryan, a member of the Depot’s board of directors. The Depot has seven 3-D printers, all about 16-inch-square metal frames with 3-D-printed plastic corners.

As technology improves, some of the sources of waste have been reduced.

“The software has gotten so much better at telling you when it’s going to be a bad print,” says Ryan St. Pierre, a member of Solid State Depot.

But bad prints still happen, and not much can be done with them.

Some printed items can be recycled in Boulder. It depends on what kind of plastic it is, says Teresa Weston, operator at Eco-Cycle. Those items must go to Eco-Cycle, which operates a service to collect hard-to-recycle items, not the city’s recycling center. Solid State Depot members haven’t tried recycling bad prints yet.

For Eight Days A Week, an imaging and copy center on Pearl Street, bad prints go in the “graveyard,” a cardboard box full of colorful plastic bits that lives underneath a desk. Simon Kugel, a designer for the shop and the resident 3-D printing expert, doesn’t throw the bits away because he plans to reuse them one day.

“ABS plastic is ultimately reclaim able,” Kugel says. “You can take it to someone who has a machine that grinds it and melts it, and turns it back into the filament.”

Eight Days hasn’t accumulated enough of the bad prints yet to need to do something with them. The owner, Sam Sussman, says that much of the filament they use is PLA plastic, which is cornstarch-based and will eventually break down into organic matter in a landfill.

But ABS plastic is more durable, Kugel says, and the shop also prints ABS plastic items. And the more times a material is recycled, the more it degrades.

“Ideally, you only want to melt it once,” says Syt, from Solid State Depot. “Also, it’s cheaper to just buy more filament. A spool of filament is around $15 to $25.”

More variables in printer processes bring different sustainability issues. About a block away from the Depot is Boulder Engineering Studio, where a larger, enclosed 3-D printer sits making printer-type noises in the corner of one work room.

John English, partner and CTO of Boulder Engineering Studio, explains how this printer modifies the chemical makeup of the plastic it is printing with — rendering it unable to be recycled. He points out the ventilation system attached to the printer, directing fumes from the printing material outside. The printer uses low-temperature UV-cured resin and runs almost non-stop, he says. The ventilation system is not required and the team added it as a precaution.

While 3-D printing may have its problems, it does create opportunities for items that can be environmentally friendly in other ways. One local project, the CompoKeeper, a big compost bin with mechanisms for sealing off its contents and repelling insects and pets, was produced by the Boulder Engineering Studio via a 3-D printer. English’s colleague worked with the local team for about a year and a half, from initial concept to prototyping, manufacturing and production.

“3-D printing was fundamental for that process,” English says. “We couldn’t have gone down that path in the same way. It would have been a mixture of more time, more work and more money without the 3-D printer.”