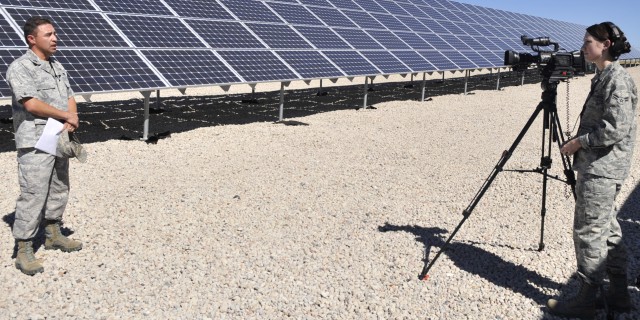 Of all the countries in the world, the United States consumes the most energy. Within the U.S., it is the Department of Defense (DOD), encompassing the Army, Marine Corps, Navy and Air Force, that consumes the most energy, according to the DOD. In 2010, the DOD’s energy costs totaled more than $4 billion. So what is the DOD doing to combat its gigantic carbon footprint? It’s looking to the sun.

The Buckley Air Force Base in Aurora brought 5,040 solar panels on line last year. Currently, the solar field provides the base with about 1 percent to 2 percent of its energy needs, according to John Spaan, chief of public affairs at Buckley.

“We’re not getting a huge amount of energy from the solar panels right now, but we’re happy to be using at least some renewables,” Spaan says. “There’s a big focus in the DOD on energy conservation and consumption, and we’re really excited to be one of the first bases with a big solar grid.”

The grid produces about one megawatt of energy, enough to power roughly 140 homes, Spaan says. Though the base cannot power its whole facility with the solar grid, there is room for expansion in the future.

“We’re lucky to be out here in Colorado where we have so many sunny days, and we want to use all the resources available to us,” Spaan says. “We’ve gotten lots of positive reactions and it would be great to keep growing it. It is an expensive project, but in a little bit of time it will pay off because we’re not using coal energy. We’re producing some of the energy that we use, and we feel like that’s really important.”

The Army and the Marine Corps have also recently begun using solar power for troops in the field and at bases abroad.

“They’re using solar energy in many ways,” says Bill Scanlon, a science writer with the National Renewable Energy Laboratory (NREL). “In places like Iraq and Afghanistan, they can power their bases without having to bring diesel by truck to the bases. The trucking of diesel to the bases is one of the leading reasons for deaths in both Iraq and Afghanistan, especially with the drivers. So solar is saving lives.”

While its application in powering military bases is useful and beneficial, deployed troops are also using solar technology in smaller, portable solar power units they can bring with them when they leave the bases.

“The sun is a global resource, and a mobile one as well,” Scanlon says. “The soldiers can change locations and just bring along the mobile solar power, so they can have electricity while they’re out there in the field.”

Ascent Solar in Denver is working to develop flexible solar panels integrated with fabric that can be rolled up like a rug or folded and put into a backpack. The panels made it onto TIME magazine’s list of top 50 best inventions last year.

“It makes a lot of sense for the military to look into using this technology,” says Brad Kemp, director of sales and marketing at Ascent. “Transporting fuel into really remote areas is expensive and it’s super-dangerous. But at the same time, a glass solar panel on a backpack doesn’t really work. It’s heavy, it’s big — you just can’t put a big glass solar panel on a soldier’s backpack. So these light, durable panels enable that transportation and use in the areas where solar was never able to go before.”

The development of these flexible, mobile solar panels not only protects the lives of soldiers, but also diversifies the group of people thinking about being environmentally conscious.

“In Colorado, there’s a good like-minded community of people that are into thinking about new ways to get energy and conserve energy. They’re passionate and educated about solar power,” Kemp says. “But people aren’t as clued in to renewable energy everywhere. Giving solar power to the military gets more people using it and offsetting their use of nonrenewable energy.”

While these innovations in solar technology are beneficial, they are only a step in the road to a reduction of the military’s huge consumption of energy.

“The president came to Buckley earlier this year to talk about energy conservation and consumption,” Spaan says. “The Air Force is one of the largest users of electrical power, mainly because of all the computer technology we have, and we know that just putting in solar panels won’t change that. So we need to take every opportunity that we can to lessen our impact.”