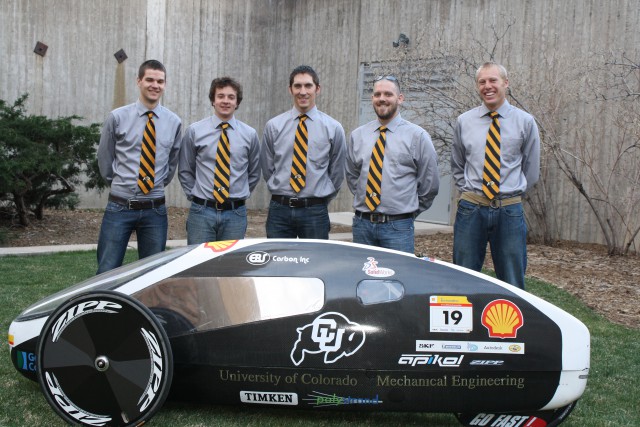 A three-wheeled, alien vehicle that can be lifted with relative ease by three or four young men is carrying the hopes of five engineering students at the University of Colorado.

They believe the car may be able to last for 1,500 miles on one gallon of gas during the Shell Eco-marathon this weekend.

The car, named F-CAT, or Fastest Car at Track, is the result of five years of work by various teams of seniors in the engineering program. The first team came up with the design, and each year the new team selected for the project makes improvements. This year’s team, consisting of seniors Matt Feddersen, Jeff Vankeulen, Jared Wampler, Paul Sweacey and Joe Gratcofsky, has added fuel injection and other features to try and beat F-CAT’s 2011 record of 1,008 miles per gallon. They’ll compete at the 26th Shell Eco-marathon against teams from high schools and universities around the continent on the streets of downtown Houston.

“It is definitely tough because we are given something, and we don’t know what last year’s team really wanted to do going forward with it,” Vankeulen says. “So it takes us a good bit of time to figure out what we need to do and where we need to focus in order to get the most benefits from our work.”

The young men have worked an average of 30 hours per week since they started the project last fall, while still taking full course loads. That dedication has extended to being up and moving at 8 a.m. on a Saturday morning while many of their fellow seniors at CU are still recovering from the previous night. They pretty much live at the engineering center, Vankeulen says.

“Social lives? Zero,” Wampler says, and laughs. “I believe we were told at the first meeting last fall, ‘If you have a girlfriend, take a picture and tell her you will see her next summer.’” The conversation among the team members sounds like something straight from an episode of The Big Bang Theory, with words like carbon fiber and dynamometer tossed about comfortably. Their collective brainpower is impressive, from Feddersen rebuilding an old Camaro in high school to Vankeulen possibly becoming an actual rocket scientist after graduation. Sadly, the team’s higher than average IQ won’t necessarily help them beat the Eco-marathon record of 2,564.8 miles on one gallon of gas which was set in 2011 by the team from Quebec’s Université Laval team.

“The winning team does a lot more with a lot more money,” Vankeulen says. “What we are doing with the amount of time and money and knowledge that we have — I mean, we are all very knowledgeable, but we are also only fourth-year mechanical engineering students.”

The team receives $1,250 from the mechanical engineering department to improve the car each year. That covers the cost of one of the special wheels that are needed for the vehicle. The rest of the team’s budget derives from grants and donations. The team isn’t focused on winning the entire competition, just on improving the car from last year and achieving increased fuel efficiency.

“This year, we all kind of decided our goal is 1,500 miles per gallon,” Vankeulen says. “If we achieve that goal, we will be really happy at the competition, and that will probably place us in the top five. To win, we would need to get 2,500 to 2,600 miles per gallon. That’s a little out of reach right now, but it is definitely possible for next year’s team.”

Despite the drain on their time and their lack of robust social lives, the members of the team agree they are glad they were able to work on this project. Some members have even gotten attached to the car, like Sweacey, the driver, who says the car is his “baby” now.

“Of all the senior engineering projects, this is the only competition-based one,” Feddersen says. “I think all of us are pretty competitive and it is fun to go out there and work and see how we can do.”

“It is also the only project where you have such a big end goal and have something to show for your work,” Vankeulen says. “I think we all would have regretted it if we hadn’t done this.”

The team will travel to Houston to test their car in the Shell Eco-marathon March 29 to April 1. After months of intensive work on the project, the teammates say they plan to celebrate with a drink and a reconciliation with their abandoned girlfriends.

Check boulderganic.com next week to find out how the team placed.