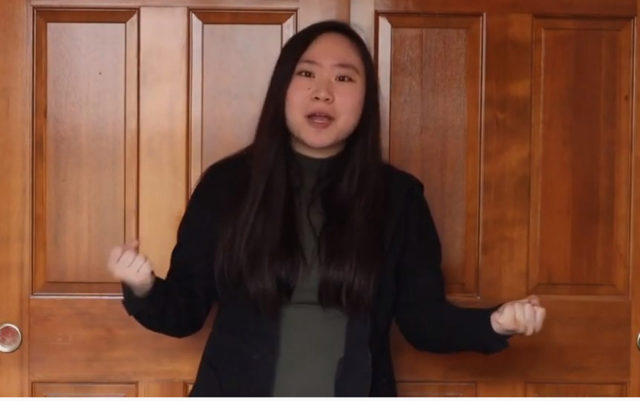 While a student at Fairview High School in Boulder, Jasmine Li was used to hearing her teachers talk about the climate crisis and how her generation was going to going to be the one to help solve it. In early August, Li was awarded first place at the International Spellman HV Clean Tech Competition for her project “solarjasmine,” which looked at making perovskite solar cells (PSCs) more stable and therefore an economically viable alternative to fossil fuels.

Li’s research is a product of her Fairview class “Science Research Seminar,” which allowed her to pursue an independent project her last two years of high school. She became interested in PSCs because “they’re really promising,” she says. First introduced in 2009, “they’re really efficient and they’ve seen drastic growth over the past 10 years and they’re also cheap,” she says, especially compared to first (made from silicone) and second (thin-filmed) generation solar cells.

“But the only limitation that they’re really facing right now is this instability within the perovskite solar cell itself and the ability arises having these different grain sizes when you’re actually fabricating them,” she adds.

The grains are the mechanism for conversion within PSCs, and they are susceptible to environmental conditions like moisture and heat, which makes it difficult to use PSCs for commercial or industrial use.

In conventional methods, scientists use a multi-step process that includes adding anti-solvent to a methyl ammonium lead iodide compound to create a reaction and grow these grains, resulting in the instability and lost efficiency. But using a combination of heat and spin casting, Li was able to create a thin uniformed layer by doing all the steps at once.

“You’re basically pipetting,” she says. “When you actually drop it, you have those grains that are starting to form and since it’s already at a high temperature it can start forming immediately while it’s spinning versus the other conventional methods, there are separate steps.”

Li’s research included finding the ideal chemical concentrations to effectively use the hot-casting technique and then comparing it to other techniques.

But, she says, there’s still a lot of work to be done before PSCs can be used on a large scale, especially given their size. Li was experimenting on small-scale cells measured in centimeters.

“One of the next challenges is scaling it up because we’re not using just one solar cell on the centimeter scale to power everything,” she says.

With a goal to inspire young people to pursue STEM education and careers, the Clean Tech Competition is open to pre-college youth from around the world and spearhead by the New York-based not-for-profit Center for Science, Teaching & Learning. Li was the only finalist from Colorado; others were from nine different states and five different countries.

She says the win was unexpected, and she really just enjoys the process of scientific competitions more than anything: being able to present her research and meeting other students around the world who are working on interesting projects in different fields. Her first place award came with a $10,000 prize.

Li, who graduated from Fairview in July, is now a Stamp’s President Scholar at Georgia Tech, where she plans on continuing her research.

Love our Lands — A virtual learning series with 350Colorado

Join 350Colorado for a virtual learning series over the next three months exploring how we all can participate to protect, connect and grow our relationship with the land under our feet.

The series kicks off Aug. 21-23 with a virtual screening of the documentary Public Trust, which explores how extractive industries and the politicians they support, are a threat to public lands by looking at three specific examples: a national monument in the Utah desert, a mine in the Boundary Waters and oil drilling in the Arctic National Wildlife Refuge.

People who RSVP will be sent a link to watch the film and will be invited to a post-screening discussion with 350Colorado’s next public lands committee meeting.

The learning series continues in September with a virtual book club discussing Deep Creek: Finding Hope in the High Country with author Pam Houston. The October event includes a regenerative agriculture discussion and screening of 2018 award-winning film The Need to Grow, which documents the need for healthy soil and how quickly it’s disappearing around the world.

On Aug. 17, the Larimer County Commissioners began hearings on the controversial Northern Integrated Supply Project (NISP), which would create a new reservoir north of Fort Collins by diverting water out of the Poudre River.

Before the meeting, citizens groups including Save The Poudre, No Pipe Dream, and Save Rural NoCo notified the Commisioners they expected members Tom Donnelly and Steve Johnson to recuse themselves due to their public support and endorsement of the project since at least 2009. The groups accuse Donnelly and Johnson of supporting NISP at rallies and having private conversations with Northern Water, the main backer of NISP, regarding the project. This, the groups argued, would prevent them from judging “the permit application from an unbiased viewpoint,” according to a press release.

“Both the Larimer County land use code and the Colorado constitution require that county commissioners not have taken a position prior to a hearing and quasi-judicial 1041 permit,” said Gary Wockner, director of Save The Poudre. “Both Commissioners Donnelly and Johnson have publicly supported, and been listed as endorsers for, NISP for at least a decade, and therefore are biased. As such, they must recuse themselves from the hearings and vote.”

The groups also suggested that Larimer County delay the NISP hearings until after the 2020 election, since both Donnelly and Johnson are term-limited.

Still, the Commissioners proceeded with the hearing on Monday evening, with Donnelly and Johnson refusing to recuse themselves and arguing that they will make their permit decisions based on the land use code and not on their personal opinions. The meeting included presentations from Larimer County staff and Northern Water. Public comments will be heard both in person and online at the Aug. 24 and Aug. 31 meetings. (Register to speak at  larimer.org/planning/NISP-1041.) The Commissioners are set to make a decision on Wednesday, Sept. 2.

In a bipartisan effort, Boulder Congressman Joe Neguse introduced the Animal Cruelty Enforcement (ACE) Act in the U.S. House on Friday, Aug. 14. If passed, the measure would create an animal cruelty crimes division within the U.S. Department of Justice.

This would “allow for robust and effective enforcement of these crimes by designating personnel focused on these issues. DOJ already has dedicated sections on other important societal concerns, such as environmental protection, wildlife and organized crime,” according to a press release from Animal Wellness Action, which helped draft the legislation along with the Animal Wellness Foundation.

“Proper enforcement of animal cruelty laws will protect animal welfare and help keep each of our communities safe from the violence often linked to these crimes,” added Rep. Neguse.

This comes on the heels of the recent passing of a wild horse protection amendment in the U.S. House that would direct the BLM to use $11 million of its annual budget on a fertility control vaccine (PZP) for its Wild Horse and Burro Program, instead of widespread roundups and removals from public land. The amendment was also sponsored by Neguse who said in a press release: “I am pleased to stand with the vast majority of my constituents and the over 80% of Americans who want wild horses protected on Western public lands. I’m proud that Colorado has been leading the way for humane management of wild horses with PZP fertility control. This Amendment will improve stewardship of wild horses and burros in other areas of the West.”