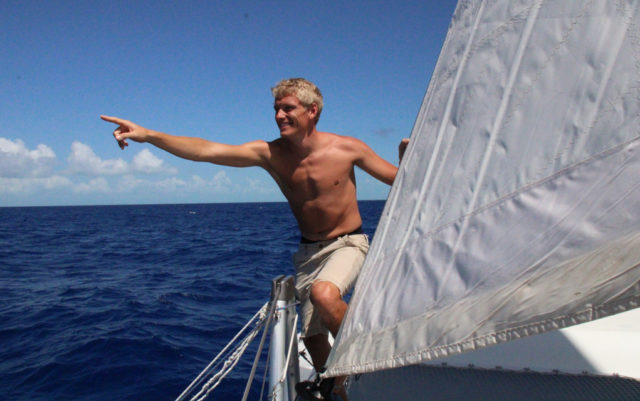 The most challenging part about spending nine weeks traveling 6,400 miles on a catamaran may not be the sea sickness, but the boredom of being on a boat in the middle of the Atlantic ocean with only three other people to talk to.

However, for Joep van Dijk, a 28-year-old geologist specializing in historic climate research, the sea sickness and boredom was worth it if it meant minimizing his personal impact on the ongoing climate crisis.

Actually, for van Dijk, it was far from boring; it was exhilarating.

“You have no society around you. It’s just you, the water and simple life,” he says.

Van Dijk began his journey from Amsterdam to Colorado after accepting a position as a researcher at the Institution for Alpine and Arctic Research at the University of Colorado Boulder.

While the most convenient way to travel to Colorado from Europe is by plane, one round-trip flight from Amsterdam to Denver emits approximately 2 tons of carbon dioxide directly into the atmosphere. The aviation industry alone contributes about 2% to the total amount of greenhouse gas emissions in the atmosphere.

So van Dijk made the journey by train, boat, bike, bus and even a little bit of hitchhiking.

Van Dijk’s interest in the climate began when he was 18, after he built a solar panel for his school. As he continued to observe the negative effects of the climate crisis, van Dijk became increasingly cautious of his personal contributions to it.

In January 2019, van Dijk left his home in Amsterdam, traveling by train to the Canary Islands, where he crossed the Atlantic on a boat. Three weeks after leaving the Canary Islands, van Dijk reached Barbados. On his way to a U.S. port, van Dijk sailed to Georgetown, Nassau and Freeport, learning about the culture of each island along the way. On one of his stops, van Dijk even saved a man’s life.

“I saw this face in the distance and it went underwater. I was thinking, ‘No way. Is this really happening right now?’” van Dijk says. “After one minute of contemplation, I decided to jump in, and I swam over. It was this old drunk Frenchman. He almost died.”

The ride took three weeks and van Dijk arrived at his destination, CU-Boulder, on Sunday, March 31.

“My boss was waiting for me at the institute,” he says. “That was a good moment. We went to his place, I spent a couple of days there, drank some beers, cooked some nice dinners. That’s when the whole Boulder adventure started.”

Although the trip was long and grueling, he feels as if he personally grew and matured by five years in two months’ time. He learned how to listen to himself, to what he wants, and to not succumb to what others expect from him.

Van Dijk says he also learned how to listen to others and understand people on his journey.

“When you are with four people on a ship, you realize the importance of companionship and social interaction. In this world where everything is so individual, we often forget how important it is to have human interaction.”

Apart from choosing not to fly, van Dijk makes decisions in his everyday life to ensure he is living sustainably. He is a vegetarian and lives in a co-op house. He and his roommates routinely buy products in bulk to minimize packaging and waste less food. He minimizes his plastic usage when possible and makes local and seasonal choices when shopping.

“Every day you have to go against the system. It takes energy,” van Dijk says.

Van Dijk filmed and photographed his adventure to Boulder and is making a documentary of his journey, which he hopes will encourage people to focus on minimizing their own personal carbon footprint. The film, Carbon Dioxide? That’s Not Right!, is slated for release in the spring of 2020.

“Slow travel is not really slow,” van Dijk says. “Somebody told me the other day if you grew five years in two months’ time, is that slow travel? No, it’s not. It’s fast travel.”