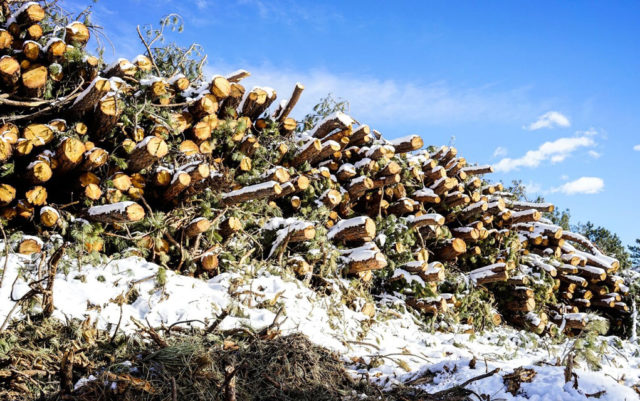 On a snow-covered Friday morning in early December, Stefan Reinold, senior forester for Boulder County Parks and Open Space, makes his way up Boulder Canyon toward the Betasso Preserve trailhead. Reinold is checking in on the Betasso wildfire fuels reduction project, which the County began in October here at one of Boulder’s most popular outdoor recreation spots. The 200-acre project in the more than 1,000-acre Betasso Preserve is intended to reduce tree density — trees that can be “fuels” for wildfire — in a targeted area. Before the project began, the target area held around 279 trees per acre. According to research, that’s about 50 percent more dense than pre-human disturbance, when low-intensity wildfire kept the forest structure more open in this lower montane, ponderosa pine-dominated area.

This wintertime, fuels-reduction project won’t return the landscape to how it behaved before humans started suppressing the natural fire regime, but come fire season, it can help reduce the risk of a wildfire sweeping across the hillsides unabated.

“No excitement, the grinder is down. Can’t get the discharge conveyor unfolded,” says Scott Golden, the Boulder County Parks and Open Space project manager for this Betasso operation, as Reinold approaches. The overnight cold snap has somehow caused the large machine’s hydraulic pump to malfunction, and the contractors can’t do their work of grinding the remaining felled trees down to woodchips — some of it to be sent off to generate heat at three area biomass facilities, some of it to be sold to composting and mulching facilities. This is the final phase of the project; there are only about 25 to 30 truckloads left to grind and haul, at about 20 to 25 tons per load. At the project’s pace, that means only about three or four more days of grinding.

“I’m getting ready to get on the phone and open up the park,” Golden adds. “It’s a nice day.”

And it is — a blue-skied, crisp winter’s morning. When Golden walks up a hill and tweets that the park is open for the day, it takes just a few minutes for a trio of runners to show up on the path, bounding through the snow in cold-weather gear. The three contractors onsite to grind through the stacks of felled trees get an unexpected day off.

But for a few mechanical issues such as this, the work has been proceeding at a steady pace since it began Oct. 24. Throughout the project, the preserve has remained open to the running, hiking and mountain-biking public on weekends. And the impact on the land has been intentionally as light as possible, Reinold says. The majority of the felled trees were removed by helicopter, and then collected in two designated landing areas that were already considered “previously disturbed” sites and located close to Betasso’s existing roads, eliminating the need to cut access roads through the steep, erosion-prone terrain.

“When you normally do a forestry operation with land-based equipment, there’d be roads and tracks from all the trucks running through,” Reinold says. “With helicopter logging, this (landing site) is really the only damage. When they’re done, the contractor is responsible for regrading the road and getting everything that they’ve damaged back to an acceptable level.”

To the southeast, across the forested hills from where Reinold and Golden stand beside the silent grinder, the Betasso Water Treatment Plant sits on a hilltop, adjacent to the Betasso Preserve. The treatment plant is undergoing its own project — a $35 million update to replace aging equipment and modernize its water treatment processes. The Betasso facility — in conjunction with the Boulder Reservoir Water Treatment Facility — maintains the City of Boulder’s water supply. Although the two Betasso area projects are separate, the fuels mitigation work will help protect the vital treatment facility in the event of a catastrophic wildfire. The nearby fuel break — the project’s most dramatic removal of trees at an almost 90 percent reduction in tree density versus the 60 to 80 percent reductions in other areas — is particularly important.

“Here’s an anchor point where we can actually stop fire and hold it from going any further,” Reinold says of the fuel break. “If a fire’s coming from the west toward this treatment plant… this will decrease the amount of fuel that’s there and decrease fire behavior, which could allow for aerial attack, or it could actually allow for safe egress for firefighters to get in there.”

Golden adds that by breaking up tree continuity, a fast-moving, catastrophic fire — such as the nearby Cold Springs Fire in 2016, or the 2010 Fourmile Fire — could drop back to the ground instead of continuing its run through the tree tops.

“When it’s in the canopy, we can’t do anything other than take pictures,” Golden says.

Jim Webster, manager of Wildfire Partners, works with homeowners in Boulder County to protect their properties from wildfires. To be most effective, of course, homeowner mitigation should be reinforced with fuels reduction in public forests.

“Homeowners are taking action, and there’s a lot of pressure on public lands managers to do their part, too,” Webster says. “The larger story is trying to create fire-adapted communities — because preparation works.”

“We see a future with more fires,” he adds. “We can’t stand around and do nothing.”

Even so, for a few neighbors, the mitigation work of the helicopters was jarring. A local veteran with post-traumatic stress symptoms and a neighbor who missed the community meetings, emails and direct mailings leading up to the project were among those who contacted Reinold’s office with concerns.

But many have expressed support for the project as well. CB Bassity — local resident, volunteer firefighter and member of the group Saws & Slaws, which gathers for local forest mitigation projects followed by communal potlucks — says although he first thought helicopters might be too much for the job (from a cost perspective), he realized helicopters could do the necessary mitigation work with little impact on the land, and in less time than ground vehicles. Helicopters, according to Golden, are by far the most productive means of mitigating fire risks, bringing in about an acre an hour of felled trees.

“I live on three acres that border the Betasso Preserve,” Bassity says. “I’m pleased with the work next door — it is now an area from which fire is far less likely to come raging in my direction.”

Editor’s note: Just before the holiday break, contractors finished the grinding and Betasso Preserve reopened to the public full-time.