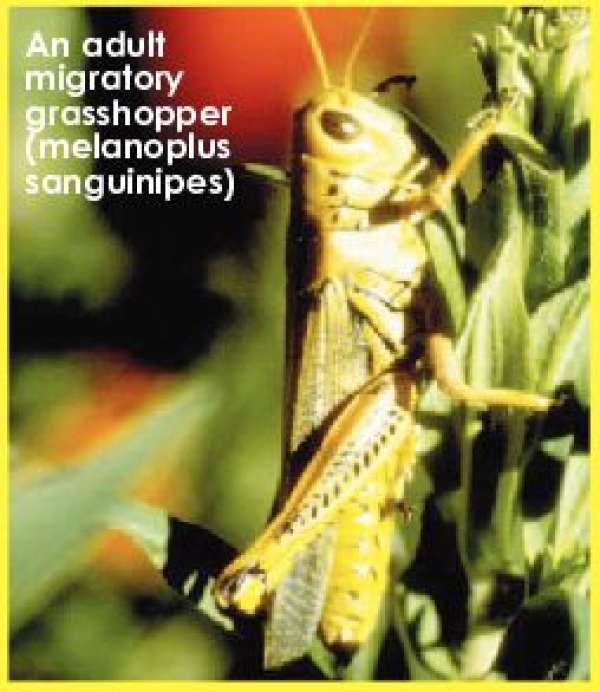 Photo by Dr.Whitney Cranshaw, used with his permission

Grasshoppers. Coming soon to a field, garden or yard near you.

Eating everything of plant material, including cotton T-shirts on clothes lines.

Or so rumor has it. It came up at my book club meeting, where a couple of members said they heard about it recently on Colorado Public Radio. The biggest grasshopper infestation since 1985 has been predicted for several Western states.

So, does this mean we need to drop our green scruples and stock up that Destruct- O-Bug chemical spray we swore we’d never use?

“That’s what we’re hoping you’ll find out for us,” I was told.

According to the U.S. Department of Agriculture’s APHIS (Animal Plant Health and Inspection Service, Plant Protection and Quarantine) survey of 17 states last fall, high numbers of adult grasshoppers were found in parts of Wyoming, Montana, Nebraska, Idaho and South Dakota. One female can produce hundreds of eggs, and the counts of eggs in some spots were also higher.

Thus, the prediction that those places could suffer massive infestations that haven’t been seen in decades.

A March 29 Wall Street Journal report widely quoted on the Internet focused on Wyoming — but did not mention Colorado. A different report aired April 8 on Colorado Matters, the Colorado Public Radio show that set off my fellow book lovers’ alarm bells. It focused on farmers’ concerns in the Grand Junction area.

And here is where the opinion of Dr. Whitney Cranshaw — Professor/ Extension Specialist in Entomology for Colorado State University in Fort Collins — comes in.

“My take on the subject is that Public Radio went way overboard trying to make a Colorado angle to the grasshopper story,” Cranshaw said in a recent e-mail. “There was nothing to base it on for our region, although last fall egg counts did identify some potential hot spots in Montana and western Nebraska. … There is nothing suggesting that Boulder County will have an unusual grasshopper season.

Furthermore, it is extremely difficult to guess about grasshoppers. First of all, there are about 100 species, a half dozen of which are the primary pest species. During outbreaks there are usually only one or two species that are in high numbers, and each species has its own cycles, so lumping together ‘grasshoppers’ as a monolithic organism is very sloppy biology.

“Also, the conditions just prior to and surrounding the egg hatch period can have tremendous impact on survival of grasshoppers. Even large numbers of eggs laid the previous year may turn into nothing special if weather is unfavorable during this critical period.”

Bottom line: Boulder County’s chances of suffering a Biblical-style plague this year are slim to none.

Grasshoppers provide food for birds, reptiles and mammals, something to consider when reaching for the spray gun.

For the garden-variety type of nuisance, you can get the scoop on effective controls and how to apply them with the smallest environmental harm from the CSU Extension: www. ext.colostate.edu/pubs/insect/05536. html.