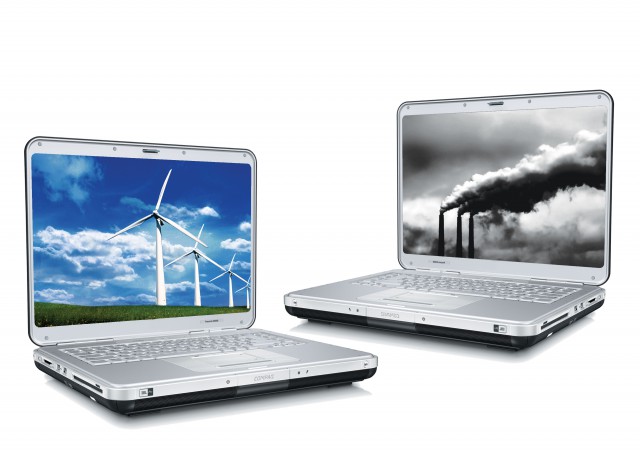 In April, Greenpeace released a report showing that the United States led the world in electricity consumption in 2007, with 3,923 billion kilowatt hours (kwH). Following the U.S. are other industrialized countries; China is second, followed by Russia and Japan. The next contender on the list is not a country, but an industry. “Cloud computing,” with 623 billion kwH of consumption, has the fifth largest electricity demand in the world.

Cloud computing is a form of computing and storage that allows consumers to access their data and applications through Internet-connected servers, without having to store it on their own computers. Behemoth businesses like Amazon, Apple, Google, Yahoo and hundreds of smaller companies offer these cloud computing services, which unfortunately require huge data centers that consume massive amounts of energy.

The Greenpeace report, “How Clean is your Cloud?” also says that many of these companies power their data centers with “dirty” energy sources, like coal and nuclear plants, whose environmental effects are no secret.

“Our direct environmental impact itself is fairly small,” says David Jilk, CEO at Standing Cloud. “But because we support different cloud providers, we are enthusiastic when we get to work with a cloud provider that is green, so to speak.”

The company currently works with around 16 cloud providers, only some of which use renewable energy sources.

“Unfortunately, right now there really aren’t that many options for a green cloud,” Jilk says. “Especially with some of the bigger players, that’s not really their emphasis. They’ll just do whatever it is they need to do, and then go back and find any green thing they can to say about it.”

Though many companies are not yet focused on using renewable energy to power their data centers, there are other ways that they could reduce their energy consumption.

Another company on Pearl Street, SolidFire, provides the data storage systems that cloud computing providers use.

“Part of the reason why a lot of these data centers consume so much electricity is they are using older technology,” says Jay Prassl, vice president of marketing at SolidFire. “Older technology, especially for data storage, is based on spinning disks. To spin those disks around all day, everyday, takes a lot of energy.”

By employing SSD technology, SolidFire reduces both the amount of energy needed to power the disks and the amount of heat they produce, thereby lowering the energy necessary to cool the systems, Prassl says. SolidFire’s technology also works to reduce the footprint of the actual data by removing any duplicate data.

“Obviously, our company can’t choose where the cloud computing providers are getting their energy from,” Prassl says. “But we can help them consume less of it by being more efficient and using storage technology that doesn’t create a lot of heat.”

Thankfully, not all cloud computing providers are shackled to dirty energy sources. Green House Data, a company based in Cheyenne, Wyo., powers its data center entirely with renewable wind energy, and also focuses on efficiency in its practices.

“When we were first looking into building a data center, we realized that there was so much waste associated with some of the data centers that already existed,” Burns says, “We decided that we could do things with less waste, reduce our energy consumption and pass along the savings we recognized to the customers.”

Though Green House Data pays more for its wind energy than it would pay for coal energy, this cost is offset by the fact that the company’s efficient practices reduce the total amount of energy it must use, Burns says.

“Everyone is looking at the bottom line,” Burns says. “And I think when you pay more for your power in the data center industry, people look you at you like you’re an idiot. Some companies are moving now to more efficient practices within their facilities, but as far as actually accessing clean power sources from the utility companies, that’s a big challenge that many of them aren’t willing to take on.”

The Greenpeace report suggests that cloud computing might have a bit of that brown cloud tinge.

“This just shows that you have to dig a little bit more into your cloud company,” Prassl says. “You need to know what kind of energy they use, how efficient are they, if they’re using technology that is going to both help you run your business better, but also if they’re going to be harmful or beneficial to the environment.”