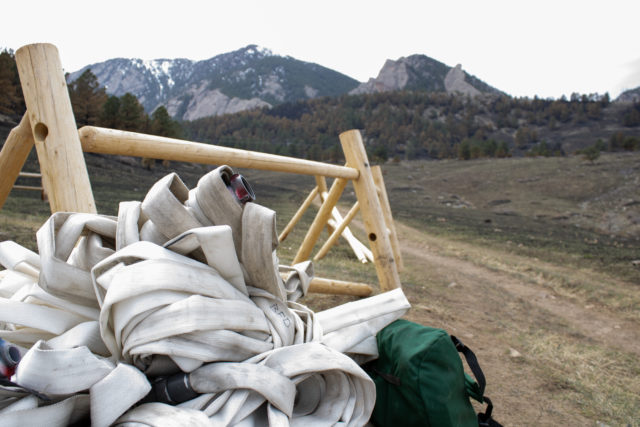 Wind gusts blew up to 50 miles an hour the day the foothills near NCAR caught fire. Just a quarter-mile away from the flames were homes in the Devil’s Thumb neighborhood.

Just months after the devastating Marshall Fire destroyed nearly 1,000 residences in Louisville, residents of South Boulder braced for the worst as the city evacuated some 1,200 people.

But when all was said and done, the NCAR fire was 100% contained within days, burning less than 200 acres, with no loss of life or structure.

So what was the difference between these two fires?

“The Front Range ecosystems, in their natural state, are very well-adapted to live with fires, and even depend on them,” says Dave Sutherland, a community naturalist who worked as an environmental education coordinator for the City of Boulder’s Open Space and Mountain Parks (OSMP) for more than 20 years.

But since the 1930s, a push for wildfire suppression has prevented natural fires from clearing away dense tree cover, deadfall and shrubbery, leading to hotter, faster-burning fires.

Forest management has been one of the primary goals of Boulder’s OSMP for the last 20 years, according to Chris Wanner, Vegetation Stewardship Senior Manager for OSMP. Wanner emphasizes that it is important for the public to understand that forest thinning (cutting down some trees to create space between others) and prescribed burns are vital to a healthy Front Range and Foothills ecosystem.

Forest management practices help the fire stay close to the ground, which in turn allows firefighters to better protect our homes. Such forest management techniques are part of what made it possible to keep the NCAR fire from reaching homes, Wanner says.

Most of the ponderosas in the NCAR fire survived, thanks to their thick, fire-resistant bark and the fact that forest thinning has been practiced annually in the area—the forest is spacious and free of dense undergrowth, Wanner says.

Low intensity grass fires are like a “haircut,” Sutherland says.  Some native species like switchgrass have root systems that can go down up to 10 feet allowing the grass to start growing back just days after a fire. This helps prevent post-fire erosion. When fires get hot enough to burn entire trees, however, these root structures can become too damaged to recover (and grass must start from seed), greatly decreasing soil stability and increasing the time it takes an area to recover, Sutherland says.

In 1935, the U.S. Forest Service instituted the “10 a.m. policy,” which mandated that every wildfire should be suppressed by 10 a.m. the day after it was first reported. This policy came about after the Great Fire of 1910 burned roughly three million acres in Northern Idaho and Western Montana, killing nearly 90 people and resulting in a massive loss of land and timber. From this time forward, areas that naturally burned frequently were not allowed to burn, leading to denser forests.

After many decades, fires inevitably occur, and, with the built up growth, can get extremely hot, becoming uncontrollable and putting human lives and structures at risk. Where the clay content in soil is high, as it is in Colorado, wildfires are capable of practically firing the clay, turning it to ceramic that plants can’t grow in, Sutherland says, often leaving an area barren of plant life. Since the 1960s, the average wildfire size in Colorado has been increasing each decade, as has the number of reported wildfires, indicating that fires are indeed becoming worse.

Naturally, the ponderosa forest is a savanna ecosystem, with mature trees spreading out from each other and native grasses covering the ground. When a fire starts in this environment, it tends to stay at a low intensity and close to the ground, leaving the burn area mostly intact and fertilized. Much of the forest management practiced in the areas in and near Boulder aim to transform the forest to a more natural state, Wanner and Sutherland say.

The open space near NCAR is a good example of how open meadows make it more feasible to prevent fire from spreading, Wanner says.

So next time you hear chainsaws and chipper-shredders at work in the foothills of Boulder, or notice a trail closure due to a prescribed burn, know the reason for these management methods is to make the forest more resilient to fire, and return the ecosystem to its natural state.