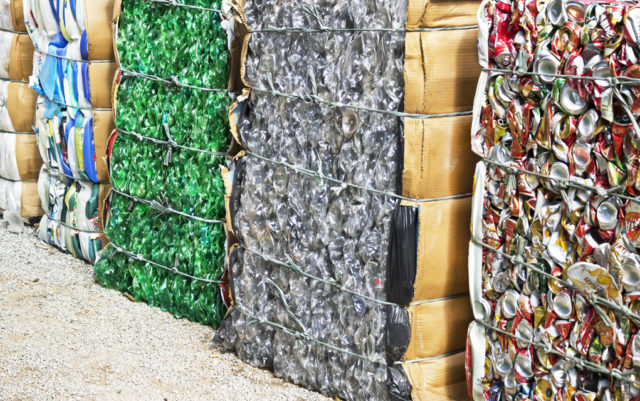 The sky is clearer these days, as mountain views come into full focus. Air traffic has dropped significantly, production of some industries has ceased and people around the world have been sticking close to home. With that, global greenhouse gas emissions fell as much as 17% by April, according to new research published in the journal Nature Climate Change. While that’s good news in many regards, the coronavirus pandemic has also increased household and plastic waste, and disrupted the recycling industry.

“The pandemic has given way to a curious phenomenon. With some industries pausing activities and fewer cars clogging roads, we’ve seen a drop in greenhouse gas emissions and a subsequent improvement in air quality,” writes Tom Szaky, CEO and founder of TerraCycle, a national sustainability company that focuses on recycling difficult-to-recycle packaging and products, in an email. “But even as the environment heals, we’ll be waking up to a waste crisis that’s worse than where we left it.”

There’s been an influx of single-use plastics and disposable plastic bags going to landfills, Szaky says, as reusables have been banned over health concerns. The use of personal protective equipment (PPE) such as masks and gloves, many of which contain plastic, have also significantly increased, adding significantly to the waste stream.

Before the start of the pandemic, approximately 40% of U.S. household waste was packaging and paper products such as plastic containers, aluminum cans, glass bottles and jars, newspaper and cardboard, according to the Product Stewardship Institute. Since the start of the pandemic, however, there’s 20-30% more trash and recycling coming out of households nationally, says Kate Bailey, policy and research director at Eco-Cycle based in Boulder.

At Eco-Cycle, the amount of single-use plastics such as take-out containers and bags hasn’t changed significantly, Bailey says. Although, there has been a larger-than-normal uptick in single-use beverage containers as summer approaches. Plus, smaller cardboard boxes associated with at-home delivery have increased as well.

TerraCycle, Szaky says, has seen a spike in both Zero Waste Boxes, which allow folks to mail in hard-to-recycle items (including PPE), and use of the company’s Loop e-commerce site, which sells packaged goods in durable, sanitized and reused containers.

While household recycling may be increasing, plastic and glass from businesses have significantly decreased, causing potential disruptions in the supply chains across the country.

“We have a lot of manufacturing companies in this country that make toilet paper, that make cardboard boxes, that make glass bottles that depend on recycling,” Bailey says. “So we’re seeing this call from manufacturers to say, ‘We need you to please keep recycling because we need these raw materials.’”

And the industry has had to shift gears toward more household pick-up to keep up with demand, as some commercial recycling companies have had to close.

“Since this increase in collections has been largely limited to residential locations as most businesses remain closed, many recycling haulers who exclusively operate in the commercial waste market have been forced to layoff employees,” Szaky says.

The pandemic comes at a time when the recycling industry was already struggling with historically low virgin plastic prices, made worse by the significant drop in oil and gas prices, and stymied international trading markets, as China banned recycling imports in 2018. There have been policy setbacks as well.

In Colorado, two separate bills banning single-use plastics like straws, bags and coffee stirrers and polystyrene (Styrofoam) take-out packaging by 2022 were making their way (successfully) through the state legislature before the pandemic hit. Now, neither one is expected to move forward this year.

“This feels a lot like getting kicked while you’re down,” Bailey says.

But, Bailey says, the pandemic has also presented an opportunity to rebuild recycling programs and make them more resilient, and she expects the global momentum around reducing plastics and waste to continue beyond this pandemic.

“The short of it is the problems with plastic production — the fossil fuel consumption, the climate emissions, and then the problems with plastics waste in the ocean, in our bodies — those are not going away,” Bailey says. “We don’t see this as a long-term victory for plastic. I see this as a short-term trend and then an adjustment period for all of us.”

Szaky isn’t quite so optimistic, however, saying it’s hard to project the long-term impacts of the present challenges.

“This perfect storm of issues has been brewing for a while and the COVID-19 crisis seems to have tipped the industry over the edge,” he writes. “While only time will tell if the industry can bounce back, it will certainly not be returning to ‘business as usual’ as soon as lockdowns are lifted.”