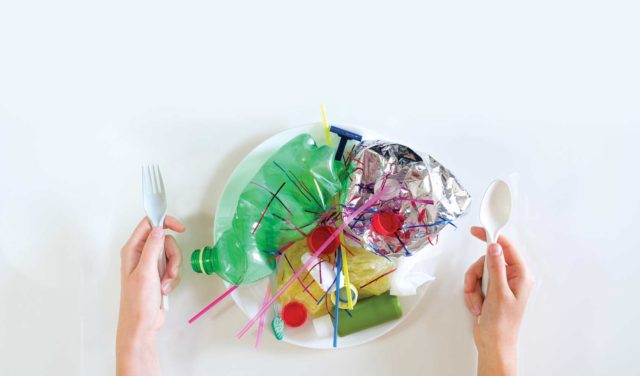 It was the colors that caught Gregory Wetherbee’s eye: red, silver, purple, green, yellow — but most of all blue. There was dark blue and light blue, opaque and translucent. Wetherbee narrowed his eyes down the microscope’s lens.

He was looking at a rainwater sample he’d recently collected from one of the eight U.S. Geological Survey (USGS) collection sites between Denver and Rocky Mountain National Park. He was supposed to be searching for signs of nitrogen pollution. Instead, what captured his attention was the colorful plastic — bright strings and broken fragments. It was like an inverse Where’s Waldo game. He couldn’t ignore the foreign materials.

Wetherbee, a USGS research chemist based in Lakewood, wasn’t exactly sure what it meant to find microplastics — plastic particles no more than 5 millimeters in length — mixed into Front Range rainwater samples, so he called in several experts to help interpret what he saw. Austin Baldwin — a USGS hydrologist based in Idaho, and one of few USGS scientists familiar with on-land microplastics — was one of those people.

“We decided to look more thoroughly through more samples,” Baldwin says. “And we found that over 90 percent of the samples actually had little pieces of plastic in them.”

After Wetherbee discovered the abundance of microplastics in the Front Range, he paused his original nitrogen pollution investigation and pivoted his analysis to the plastics. “The results are unanticipated and opportune,” states the study he published in April 2019, titled “It is raining plastic.” But in its “Discussion” section, Wetherbee, Baldwin and the study’s third co-author James Ranville of the Colorado School of Mines, write: “How these plastic materials are accumulating and being assimilated in the environment and biota is unclear. Moreover, the potential effects of these materials on biota is not understood.”

It’s impossible to trace microplastics back to their origins, so where exactly these particles come from and how they infiltrate the environment is still hazy.”

Trash likely plays a large role; as plastic items degrade outdoors, they shed particulate matter. A 2016 study explains washing machines could be major contributors, too, flushing colorful fibers from synthetic clothing into the environment. Paints produce microplastics, as do toothpastes and tea bags.

While scientists have been studying microplastics in oceans for a couple of decades, it wasn’t until the early 2010s that scientists turned toward freshwater environments, Baldwin says. “It’s a pretty new field, and there’s not too many of us that are doing studies.”

But, in the context of a world plagued by toxic fumes, poisonous minerals and other environmental disruptors of all shapes and sizes, are tiny pieces of practically invisible plastic the biggest scientific concern out there? “We don’t think [microplastics are] great for the fish, but how do they compare to all these other things? And is this what we should be worrying about?” Baldwin asks. “I think that’s still the big question.”

There are some immediate concerns that Baldwin urges more scientists to study. One is the question of how microplastics impact human biology. “As microplastics get smaller and smaller … they can actually get to a size where they can go through cell walls and get into the bloodstream,” he explains.

“What we know is that microplastics are out there, and we know that they’re being ingested,” Baldwin says. What scientists still don’t know, exactly, is what that means. “I think that it’s worth looking at just because there are still a lot of unanswered questions.”