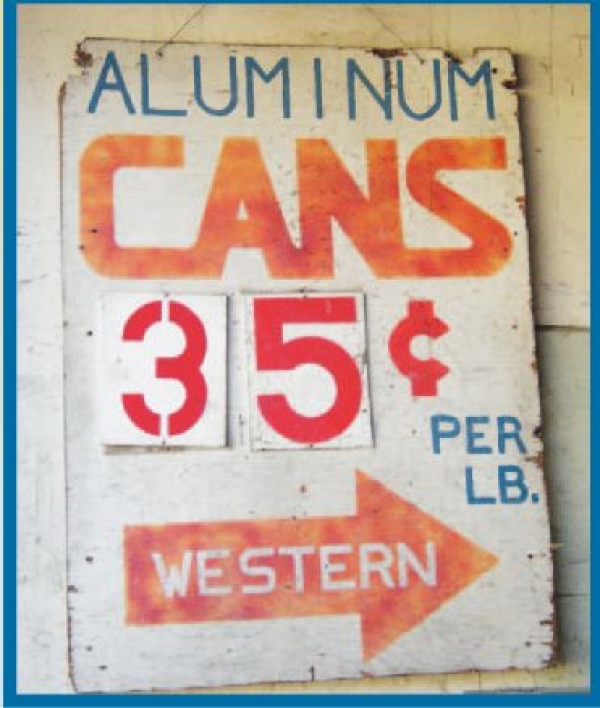 After he retired from masonry construction in 1989, Robert Barlow decided he’d use his free time for a little business, buying and selling cans and other discarded aluminum.

The modest Boulder business soon expanded to cover other kinds of metals, but it has the same name today: Western Aluminum Recycling.

It remains in the same place it began — 3280 Valmont Rd., Unit C. And it’s not the classic junk yard you would expect — it’s part of a small industrial strip.

Every day except Sunday, through two small warehouses and a tiny office, flows a stream of metals, from bags of soda cans to just about anything else metallic that doesn’t attract a magnet.

Sons Brad and Dale left the construction and engineering trades, respectively, to join their father.

“I have a degree from the School of Mines,” says Dale. “Made way more money than I do now as a mining engineer, but it was a desk job.

Hated it. Knew I had to be outside more, and doing something physical.”

Most of their customers are regulars — contractors of every kind, towtruck drivers (they get to keep cars if customers don’t pay), machine shops, small manufacturers, renovators and do-it-yourselfers, as well as 60 to 70 people a day with five or more pounds of aluminum cans each.

Prices currently range from about a dime a pound for the lowest grade of cans to as much as $8 per pound for carbide tools. When metal commodities prices change, so do what scrap metal recyclers pay and get paid.

Small dealers such as Western are the first rung of the commercial recycling ladder — buying scrap metal locally and selling it to bigger recyclers who resell to markets that need loads of materials to send to smelters and foreign countries.

Western attracts people who want more than a tax deduction for bringing in their old metal.

And when times get tough, some people resort to stealing anything for a quick buck: copper wiring torn out of municipal streetlights, catalytic converters snipped off the undersides of cars, parts taken from construction yards and more.

So scrap metal recyclers often get tips from law enforcement and companies that know the first place certain missing goods turn up will be on their doorsteps.

“If we’re really suspicious, we just don’t buy,” says Dale. “For new customers, we get a photocopy of an ID, their license plate numbers and make of car. Fortunately, we’ve had very few instances of things turning out to be stolen.”

For the Barlows, recycling is not just a living.

“It’s a neat thing to have been a mining engineer, where we were digging metals out of the ground,” says Dale. “And now I get to send off the end products to be recycled.”