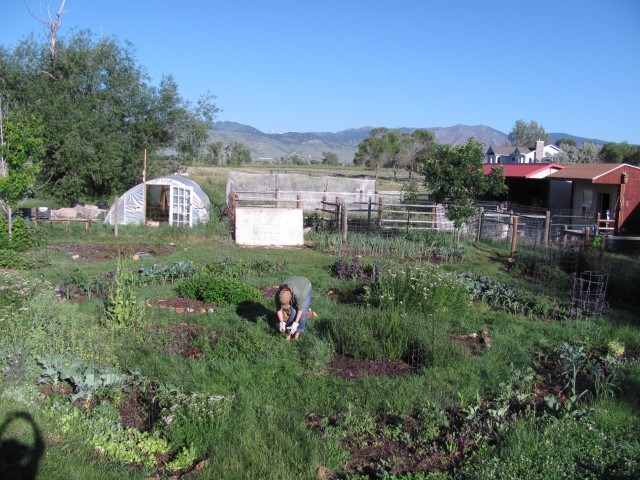 After years of fighting Boulder County land use codes and regulations, Zia Parker is selling her farm and moving with her husband to Ecuador in hopes that running a permaculture farm will encounter fewer obstacles in the South American country.

Parker’s farm, Willow Way, is a permaculture herb farm and herbal CSA in Niwot. Permaculture is a design method that uses the principles of natural ecosystems to create diversified food production systems anywhere from rural farms to urban apartments — a method that seems like it would fit perfectly in Boulder.

But Parker also intended her farm to be a demonstration farm where people could go to learn about permaculture practices. This demonstration aspect brought trouble in the form of a cringe-worthy saga of public hearings, objecting neighbors and tight restrictions.

“It ended up being a really heavy logistical task, to carry out all the restrictions they placed,” Parker says. “It’s a very cumbersome process to be involved in as a citizen, and farmers don’t have that kind of time. Who does?” Parker recently sold Willow Way to Susan Mitchell and Jay Smith, who talk enthusiastically about owning the farm and say they plan to keep Parker’s permaculture practices intact.

“We’re going to continue the legacy of sustainability and growing herbs, but also look at expanding to include more vegetables and fruits,” Mitchell says.

Mitchell and Smith say they will also retain the educational aspect of Willow Way, though through different methods than Parker.

“I’ve been in the permaculture community for the past 25 years, and I’m a fifth-generation organic farmer,” Smith says. “One of the things I’ve done in my career is permaculture projects onsite for schools, churches, institutions and individuals that just want to have their own organic foods growing in their front yard.”

Smith says they’ll be making use of permaculture’s ability to work in both rural and urban settings and will take the demonstrations from the farm to the sites of those interested in learning about techniques. Because Parker’s problems stemmed largely from concerns about privacy and increased traffic, Smith says she does not anticipate problems with the local government or neighbors.

“We really believe in having open communication with the neighbors,” Mitchell says. “I don’t think we’re going to be doing anything they’ll find objectionable at all.”

When Parker first attempted to start her demonstration farm, her application was sent to a public hearing. The Land Use Department approved the farm, but only under certain conditions.

“The county took this kind of two-faced stance, saying that they would approve the demonstration farm so they could save face,” Parker says. “But then they put all these restrictions on it, to the point that it was impossible to operate as a viable business.”

The county restricted the number of cars that could be at the property to just 10, and limited where cars could park. Though Parker’s application made clear she intended Willow Way to be a demonstration farm, she was told she could only give three tours per year. Finally, the county ruled that her studio would have to incorporate two disability accessible bathrooms.

“With a 600 square foot studio, that would mean we would barely have space for the classroom,” Parker says. Parker proposed putting two disability accessible portable toilets on her farm instead. Her request was denied, however, as portable toilets are not covered in the land use codes, she says.

“The county wasn’t against me. The codes were,” Parker says. “The county did not interpret the codes in favor of sustainability, and they did not use the processes available to them to change the codes to favor this sustainability-based project. In many instances, the codes are absolutely contrary to sustain ability.”

Parker says she believes the county could greatly improve its support of small farmers and sustainable practices by streamlining the process by which land use codes are changed.

“[Officials in the Land Use Department] say that they’re just doing their jobs and that they have to follow the codes,” Parker says. “Well, whose job is it to make the codes, and adapt the codes to the needs of the people and the land? We need to be able to change the codes so that they support sustainable practices.”

Though Mitchell and Smith will continue the sustainable, permaculture practices of the farm, Parker says she believes the root problems with what shut her farm down still need to be resolved.

“The planet is screaming for attention, for common sense, for human beings to be considering her in every decision,” Parker says. “The codes need to be more adapted to the needs of a changing planet. The whole process needs to be more supportive of the Earth.”