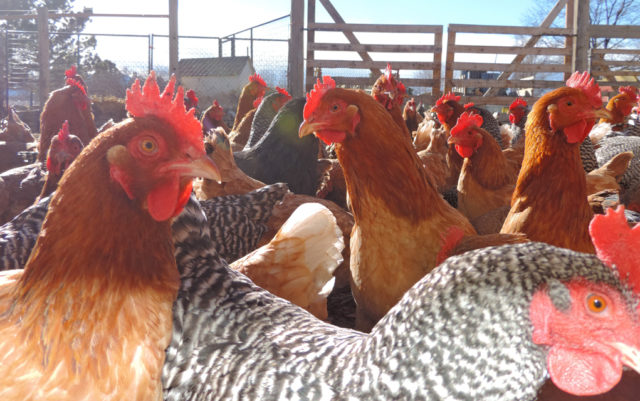 Partnerships, community and sustainability are a way of life as well as a business model for Andre Houssney of Jacob Springs Farm in Boulder.

On a recent spring afternoon, Houssney, culinary instructor Carlos Ruiz of the Aguste Escoffier School of Culinary Arts, and 10 aspiring chefs package-dried beans inside the cramped Jacob Springs Farm Kitchen located on the corner of Arapahoe and 75th.

The students are spending the day with Houssney to learn about his farm-to-table operation and the organic foods he produces — a diverse selection that includes beef, pork, poultry, eggs, fruit, vegetables and more.

Houssney moved to Boulder in the third grade after fleeing war in his native Lebanon. He didn’t really feel like he fit in initially, but eventually he found his place tending the garden and keeping bees for a neighboring farmer. “Everyday after school I was there helping out,” he says. “I was the only kid of color. I had come out of a war zone. I found a refuge with plants and animals and quiet moments on a tractor.”

Jacob Springs Farm, which Houssney and his wife purchased in 2010, is just down the road from the farm where he worked as a teenager. “I grew up knowing the kids who had this farm,” he says.

As the Escoffier students clean, weigh, bag and label a mix of black, pinto and gray northern beans, Houssney explains how an incident in Africa led him to sell this combination of beans and deepened his collaboration with the culinary school.

In 2016, Houssney had recently returned from training farmers in Togo, a West African nation on the Gulf of Guinea, where he contracted malaria and dengue, suffering so much he wasn’t able to harvest his crop at Jacob Springs.

“Escoffier came and saved the harvest. I didn’t have the energy,” he says. “These beans are grown from the seed that Escoffier harvested (two years ago).”

Today, Jacob Springs is the third local farm that Instructor Ruiz and his students have visited in as many weeks. “We help [farms] out with the process of weeding, harvesting, planting… rotation of animals in the field,” Ruiz explains. “Today we tasted fresh milk from cows. We talked to a CSA. We saw pigs about to give birth… We saw how to inoculate mushrooms in hay.”

Ruiz explains how Boulder’s Escoffier Culinary School offers its students a hands-on experience rooted in sustainability. This on-the-ground approach helps students develop a deeper sense of respect for the ingredients with which they cook. “We don’t lecture. We demonstrate, and we let them practice.”

After about an hour, the group counts off the 53 one-pound bags of organic beans, which Houssney sells for about $2 per pound. “I don’t expect to make too much on beans,” he says.

Although he sells CSA food shares and has hosted farm-to-table dinners, the majority of his business is selling products to fine-dining restaurants.  However, these items, often higher-priced, aren’t a weekly necessity.

“They want the cool things they can put on the special,” Houssney says.

Houssney estimates in a special dinner entree, the “protein on the plate” constitutes 25 percent of the cost. His oyster mushrooms, however, may contribute up to 30 percent.

Welcoming the culinary students is just one way Jacob Springs Farm educates future farmers, one of its main goals on top of practicing regenerative, sustainable agriculture. Houssney and his wife have also sponsored approximately 75 interns from the group World Wide Opportunities on Organic Farms. “Quality starts from the ground up — starting with the soil,” he says.

In Houssney’s experience, the people in Boulder tend to value local food more than other communities. “They care about the environmental impact, quality and ethics,” he says.  “You can do really high quality things if you are willing to do the labor.”

When Houssney is not tending his crops and animals or mentoring students here, he continues to spread the value of local-run agriculture operations to farmers in Africa. “Most of my work is in Zambia,” where more than 1,000 farmers participate in an organic honey and beeswax co-op he helped organize, he says. The country has lots of land resources but high unemployment, so “there’s a great opportunity. … It’s all very well run by locals” — just like Jacob Springs Farm.