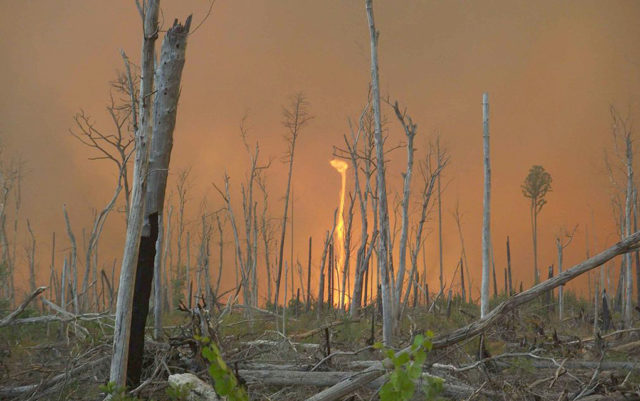 Humans have more than doubled the wildfire season in the U.S. People — rather than natural causes — were responsible for 84 percent of all U.S. wildfires between 1992 and 2012.

And the area at hazard from fires begun by human action now extends over 1.9 million square miles, more than seven times greater than the 270,000 square miles area at risk from fires started by lightning.

Researchers from three states studied U.S. government records of 1.5 million wildfires during those 21 years. They found that human-caused fires accounted for 44 percent of the area burned, they report in the Proceedings of the National Academy of Sciences.

“There cannot be a fire without a spark,” says Jennifer Balch, a geographer who directs the University of Colorado Boulder’s Earth Lab. “Our results highlight the importance of considering where the ignitions that start wildfires come from, instead of focusing only on the fuel that carries fire or the weather that helps it spread. Thanks to people, the wildfire season is almost year-round.”

Her research colleague Bethany Bradley, of the University of Massachusetts at Amherst, says, “It turns out that lightning-started fires happen primarily in the inter-mountain west and almost exclusively in the summer, whereas human-started fires happen pretty much everywhere and extend the fire season far into the spring and fall.

“Our paper is the first to document the remarkable influence of human ignitions on ‘wildfire.’ Since we humans are the source of most fires, we are also the solution to reducing the number of costly and damaging fires.”

Humans have increased fire risk in a number of ways, and population growth and urban expansion into what was once forested terrain have played a part. So, too, has global warming as a consequence of the combustion of fossil fuels, which has begun to extend the growing season, create ever greater levels of fuels and increase aridity in already dry lands.

The forests have responded by burning ever more fiercely. This has happened in the U.S. West, and climate change has been linked to the increasing frequency and extent of such blazes.

Researchers have warned that fires are likely to become more extreme and that the hazard now extends across the entire warming world.

The latest study found that the season for fires ignited by lightning was roughly 43 days, exclusively in the summer and mostly in the mountain regions of the U.S. West. The season for fires begun accidentally by humans now extends for 93 days, and humans were to blame for an average of 40,000 fires in spring, autumn and winter annually. This is 35 times the number of fires started by lightning in those seasons.

“We saw significant increases in the numbers of large, human-started fires over time, especially in the spring,” Bradley says. “I think that’s interesting and scary, because it suggests that as spring seasons get warmer and earlier due to climate change, human ignitions are putting us at increasing risk of some of the largest, most damaging wildfires.”