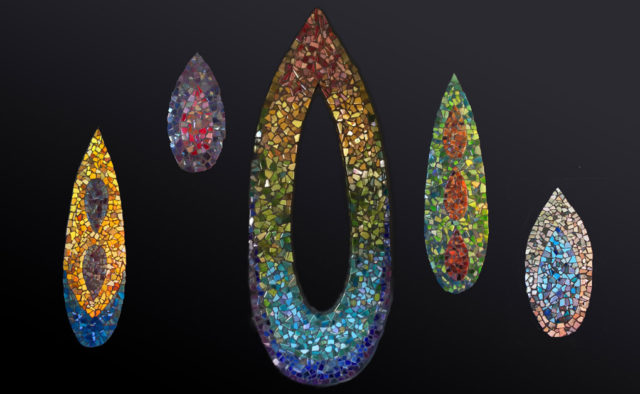 Environmental concerns have been ingrained in multimedia artist Sybille Palmer since she was 10 years old. Palmer spent her teenage years in Leverkusen, Germany, a town then dominated by pollution from a nearby chemical plant.

“Certainly I could smell it,” she says. “The Rhine was very polluted — you couldn’t go swimming in it. Nobody could even set foot in it. And everything was dying.”

Those issues would stay with Palmer throughout her life, manifesting themselves in her artwork, which is now on display in The Dairy Arts Center’s SEED: Disperse exhibition through July 4.

The exhibition explores seed-related environmental issues such as diminishing biodiversity, agricultural pollution, suburbanization and climate change while aiming to foster an appreciation for the complexity and beauty of plants.

SEED, now in its fourth incarnation, began in Taos, New Mexico, in 2009. Making its first venture outside its birthplace, The Dairy exhibition features more than 20 artists, a combination of both locals and long-time collaborators.

The seed theme is open for artistic interpretation. As a whole, the exhibition encompasses ideas including potential, travel and movement, “cross-pollination” between art and science, and the interconnectedness of big and small.

The exhibit is divided into two sections. The first side is spacious and repetitive, containing many of the exhibit’s larger works. It evokes the environment on a macro-scale in its presentation and in the subject matter of its pieces.

The other side focuses instead on the small-scale world of seeds, with pieces fitting together tightly. This natural effect is heightened by a physically smaller space and the use of ambient nature sounds coming from this side of the exhibit. Where the first side depicts the grave issues facing seeds and plant life, the second depicts the beauty, wonder and potential of those seeds.

“I want to give a feeling of being immersed in the world of seeds, or planted as if you were a seed yourself,” Lee says. “It’s a super dense, salon-style installation in the area that should make you feel planted, versus the more fragmented, open repetition in the other half of the gallery.”

On the first side, Evan Anderman’s aerial photographs depict agriculture and the human relationship to the environment on a large scale. Taken in Eastern Colorado, the photos appear abstract or microscopic, reminding us of the linkage of small and large-scale environmental issues. Macroscopic trends affect individual seeds, and individual seeds can have far-reaching effects.

In the second section, Annette Coleman’s mosaics add vibrant colors to the otherwise earthy section, depicting a large seed, an avocado and an almond. The pieces aren’t just complex, captivating and fragile for their own sake — these traits also describe the depicted objects themselves. That the colorful tiles were recycled from found objects in the Boulder area sends a message that many small acts together can have profound effects.

Also in SEED is Palmer’s piece “Alphabet of Life Scroll,” nicknamed the “Extinction Scroll.” The 34-foot-long scroll contains the names of 9,000 plant species that are endangered worldwide. The piece looms high over the viewer, suspended from the ceiling.

The scroll’s dense text is interspersed with large photographs of some of the plants, which grounds the mind-numbingly extensive list of names in reality. The photos are partially faded, reflecting the at-risk status of the plants — they’re facing extinction, but not yet gone for good.

This theme — potential — pervades the exhibition. It’s what makes an otherwise discouraging topic inspirational. But Lee is clear about the magnitude of the issue.

“Without seeds we’re not going to survive. On the nourishment level and on the wildlands level, they are essential to life on this planet.”