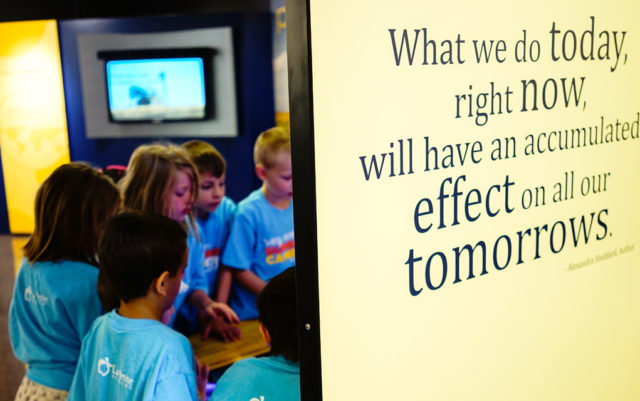 It’s a warm and breezy summer morning atop the hill at the west end of Table Mesa Drive, hikers set off from a popular Boulder trailhead in the shadow of Bear Peak. The hikers hardly seem to notice the rose-colored sandstone structure towering above the hilltop’s swaying grasses: the National Center for Atmospheric Research (NCAR) Mesa Lab, one of the most renowned of Boulder’s many illustrious scientific institutions.

Although still and stately from outside, NCAR is teeming with excitement inside its thick walls today. That’s because it houses one of the region’s largest permanent exhibits on climate change, the newest addition to its Visitor Center, and a gaggle of young children have come here to explore it. In the Visitor Center lobby, their two teachers shepherd the tiny crowd of matching summer camp T-shirts around Eileen Carpenter, NCAR science education specialist and tour guide. Carpenter leads them up the stairs to the second floor, where the climate change exhibit begins.

The first part of the exhibit draws the kids like a beacon, with its flashing lights and videogame-esque appearance. Carpenter crouches to their level as she explains this is a game about how people choose to live their lives. She pushes a button to start the game, which begins posing a series of life choices. The first choice is about travel.

“Do you think it uses more energy to take a lot of airplane trips, or just a few?” Carpenter asks the students. “A few!” comes the answer in unison, and several climate-savvy little hands slap the correct button.

“A long commute, medium commute or short commute — that means driving to your job,” Carpenter says. “Which one uses less energy?”

“Short!” Seemingly all of the kids answer together, and hands slap the “short commute” button. It’s like climate Whack-A-Mole.

“You guys have really got it,” she says. And one boy is particularly knowledgeable for his young age. Carpenter starts to ask, “Is energy…”

“Energy from coal, energy from natural gas,” the boy cuts in, reading from the flashing options. Then he sees his answer: “Solar! Solar energy is best!”

When all questions have been answered, the front façade of the game lights up with a score. The higher the lights illuminate, the more carbon-intensive energy your life decisions used.

“If you used lots of energy, the light would go way up there, and that would cause the Earth’s temperature to go up,” Carpenter says. “And do we want higher temperature?”

“No!” shouts the boy, a likely future scientist. “It could melt the ice caps!”

From this energetic start, Carpenter walks the kids to a sit-down station, where they can draw their energy-saving ideas and hang them on the wall. Someone needs to spell “electricity” and the teachers help out. On one square of paper, wind turbines sprout from hillsides like flowers. Carpenter praises the little artists, and the kids seem to be thoroughly enjoying themselves.

It’s encouraging to see these youngsters eagerly learning about reducing their climate impact (and showing how much their generation knows already), especially in a time where bad news about our changing climate abounds.

In May, Antarctica recorded more than 400 parts per million carbon dioxide in the atmosphere for the first time in 4 million years — and it was the last observation station on the planet to top this alarming level. At the other end of the Earth, Arctic sea ice dwindled to unprecedented low levels, with scientists fearing runaway melting. And as NCAR itself reported this month, the dramatic melting of Greenland’s ice sheets is shifting so much mass it’s literally slowing the Earth’s rotation. Understandably, the headlines can be disheartening.

The NCAR climate exhibit, visited by nearly 5,000 people since its opening in June — mostly children — feels like an antidote to climate hopelessness.

“The exhibit does an excellent job in pointing out how we can confidently make the association between our way of life and our climate,” says Dr. Ben Sanderson, NCAR project scientist and advisor on the climate exhibit. “We’ve tried to show that if the population as a whole makes some really modest changes to their behavior, it can have a big effect on how the future evolution of our planet is going to unfold.”

Becca Hatheway, exhibits manager at Mesa Lab, guided the exhibit’s design. Redesign, actually: Its smaller, decade-old predecessor had become outdated, both its technology and its message. The old focus was on teaching what climate change was and convincing people it existed. The new focus is helping visitors discover all the things we can do about it.

And she’s interested in more than what the exhibit teaches about climate mitigation. “The research shows that from a one-off experience at a museum, people can learn content,” Hatheway says. “But what I’m also happy with is they can have a positive experience with science — and that might make them inclined to want another positive experience with science, whether that’s taking a class in school or going to another museum.”

From touch screens, to hand-cranks, to pencil and paper, to a tornado machine (a huge hit), to a short nature walk learning to use infrared thermometers, the kids spend more than two hours as both climate problem-solvers and climate scientists in training. This group is a bit younger than the target audience — upper elementary to middle school — but they stay engaged, and they’re genuinely having fun.

“Rather than scolding individuals for their actions or focusing on the overwhelming proportions of the problem, the exhibit calls on individuals to be part of a collective solution,” says Dr. Nan Rosenbloom, NCAR associate scientist and another advisor on the exhibit. This is, she says, “the opposite of hopelessness.”