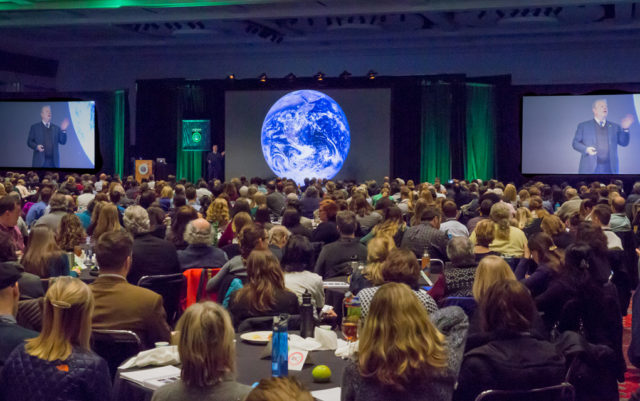 Courtesy of the Climate Reality Project

Like an increasing number of parents these days, Harriet Shugarman, mother of two, often worries not only about how climate change will affect us today but also how it will affect future generations. While Shugarman, a Canadian native residing in New York, worked as a policy analyst with the International Monetary Fund for the United Nations, she says did not hear a widespread call for climate action until 2006, when former U.S. Vice President Al Gore released his film, An Inconvenient Truth. Then in 2007, shortly after watching the film, she attended a Climate Reality Leadership Corps training session.

She is now one of the 10,812 trained climate leaders working to raise awareness of global warming in their communities through the Climate Reality Project, a nonprofit organization founded by Gore to help communities around the country foster conversations around similar topics to those raised in his film. More than a decade after its establishment, the organization has trained thousands of individuals and has expanded its presence to 135 countries.

During the first weekend of March, the Colorado Convention Center was filled with hundreds of diverse individuals attending the 34th Climate Reality Leadership Corps training, the first training following the Sundance premier of Gore’s An Inconvenient Sequel: Truth to Power. After the 2006 film ignited a conversation around climate change in the popular media, An Inconvenient Sequel focuses on the worldwide efforts to tackle this issue. Many of the topics in the movie were elaborated upon in the training, such as the 2016 Paris Agreement and the importance of investing in renewable energy.

Shugarman, like many climate reality leaders, uses the Climate Reality Project and training as reliable resources for facts about climate change and possible solutions. Her experience led her to start Climate Mama, an online community of parents with advice and tips on how to talk to children about global warming. Parents who choose to become part of the Climate Mama community receive newsletters with the latest information on environmental policies and occurrences. They also have the opportunity to connect, organize marches and reach out to their representatives about the degrading planet.

“I would never have felt empowered to establish Climate Mama had it not been for my training with the Climate Reality Project,” Shugarman says.

The recent training in Denver primarily focused on the rising temperatures in the West, with a focus on public lands, water resource management and changing winters. It addressed the variable precipitation patterns that have led to flooding in Colorado and presented the personal narratives of first responders whose lives are at greater risk from the increase in forest fires and floods.

With a decrease in snowfall costing ski resorts and companies approximately $1 billion in potential revenue, a big focus at the conference centered on the Climate Reality Project’s I AM PRO SNOW program. I AM PRO SNOW is a grassroots initiative partnering with athletes and major industries to fight against warming winters. Its outreach aims to encourage communities worldwide to adopt practices that work toward being run by 100 percent renewable energy.

Another program branching from the Climate Reality Project is the 100% Committed campaign. During the training, Park City, Moab, Ski Butlers and Colorado State University all made the pledge to transition to 100 percent renewable energy before 2030. Cities, companies and colleges interested in making the transition can contact the Climate Reality Project for resources and step-by-step procedures on how to do so.

Ken Berlin, president and CEO of the Climate Reality Project, also spent time at the recent training addressing concerns fueled by the new Trump administration. Berlin broke down climate policies and described which actions the president can and can not take — all with a big emphasis on the importance of the people’s voice.

While 71 percent of people think climate change will affect future generations, only 40 percent think it is going to affect them. Climate leaders are asked to bring a sense of urgency regarding climate change to their communities through presentations and daily conversations.

“We have a tremendous problem with climate change and the only way we’re going to solve it is if people are involved, if people make this an issue they care about, if they go to their friends, if they go to their congressmen and congresswomen, their senators, their governors,” Berlin says. “We need people to become climate activists to solve this very difficult problem. It’s going to affect them and their children but [positive change] is not going to happen unless people stand up and take a stand on this issue.”

After the 34th training in Denver, the number of Climate Reality Leaders grew to 11,700. The training highly emphasized the importance of individual action and congratulated attendees for taking the first step toward helping address climate change in their communities. Leaders were encouraged to personalize their presentations and projects however they see fit, like what Shugarman has done with Climate Mama.

“Everybody has a differentiated ability to do things,” Shugarman says. “We each can do things and maybe it’s not that giant leap that’s going to solve the climate change crisis, because no individual is going to do that by themselves, but we have to all work together on it.”